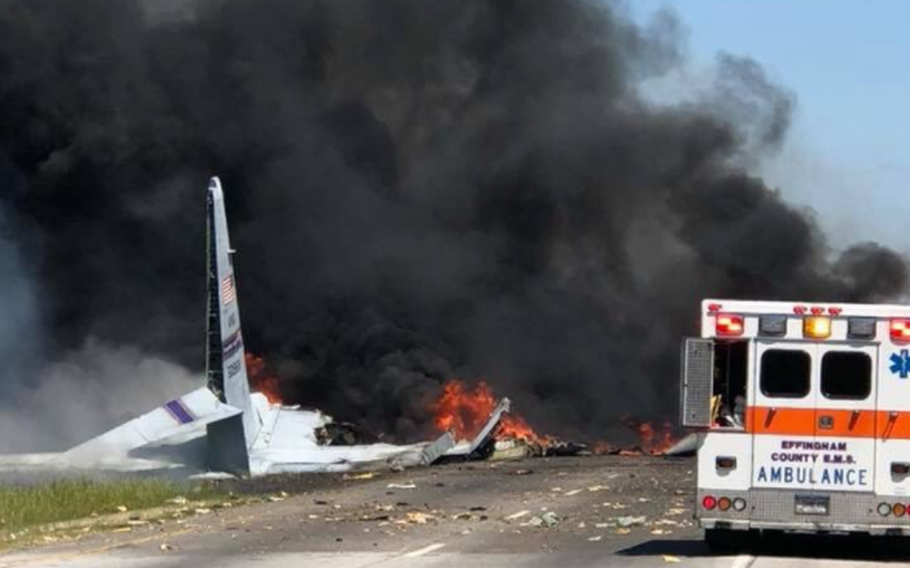 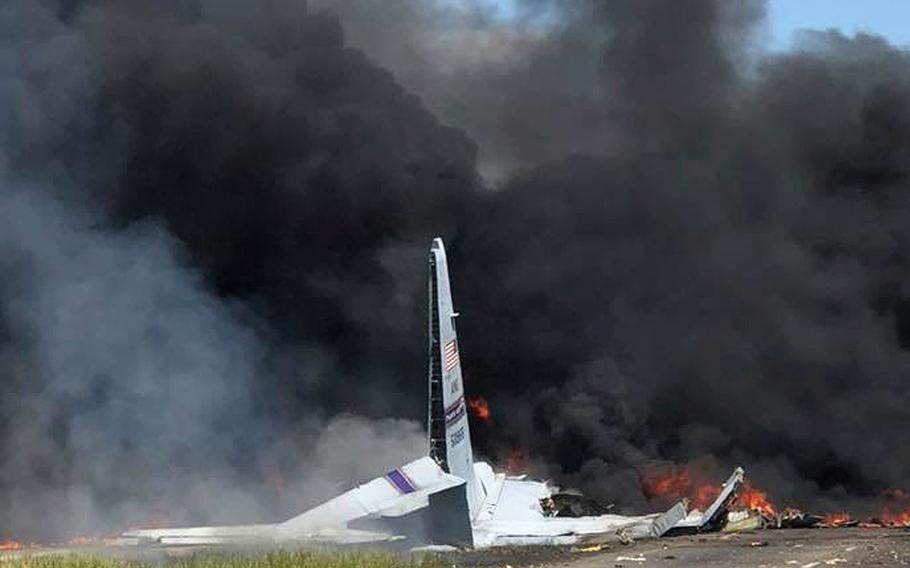 Flames and smoke rise from an Air National Guard C-130 cargo plane after it crashed near Savannah, Ga., Wednesday, May 2, 2018. (James Lavine via AP) 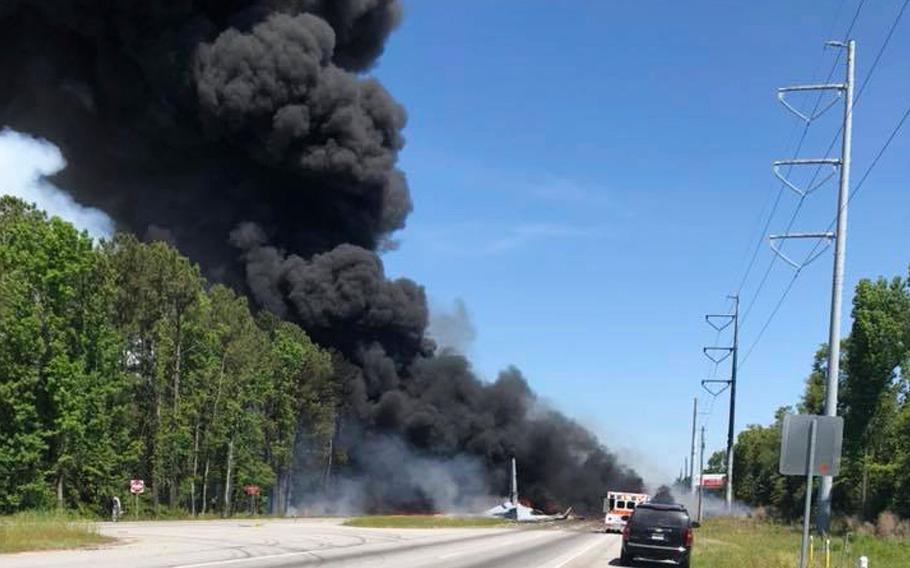 Flames and smoke rise from an Air National Guard cargo plane after it crashed near Savannah, Ga., Wednesday, May 2, 2018. (James Lavine via AP) 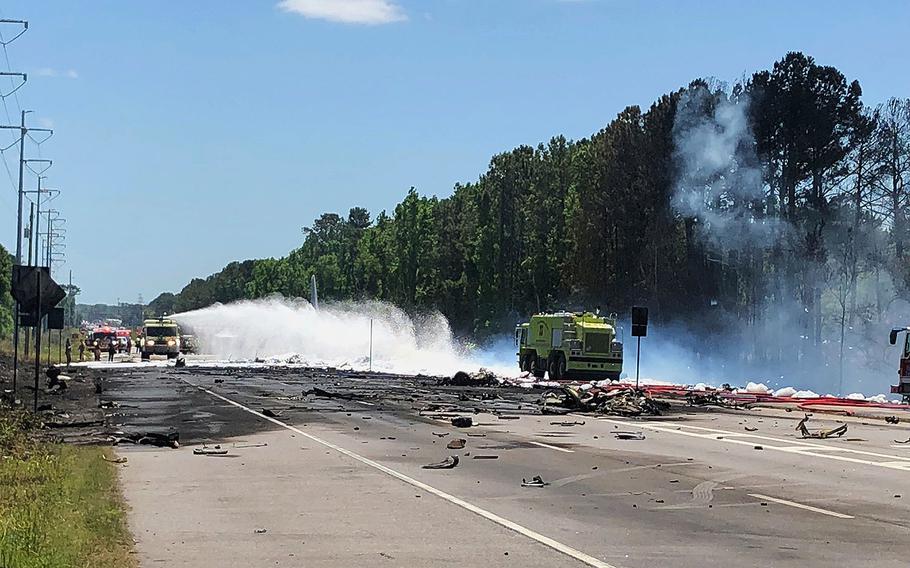 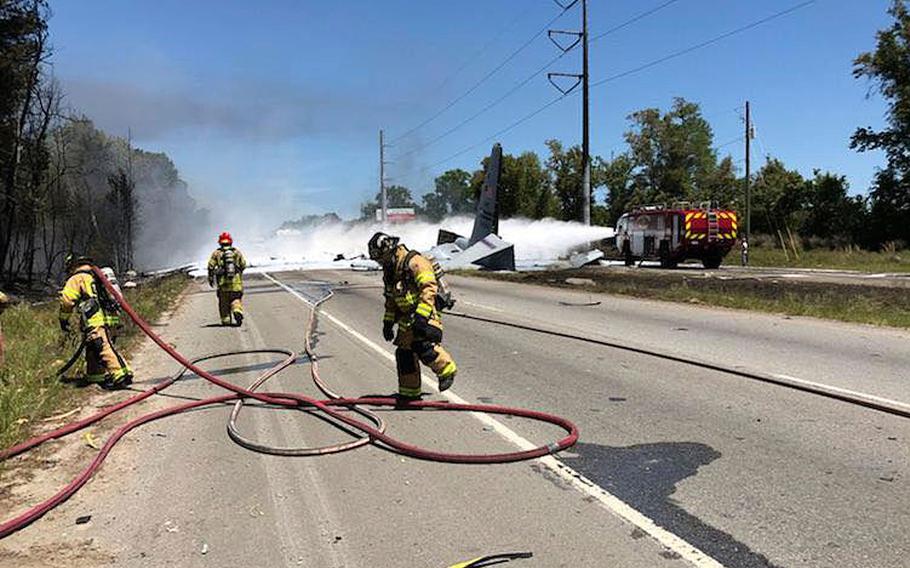 Firefighters work to extinguish a fire caused by a military cargo plane crash near the airport in Savannah, Georgia on Wednesday, May 2, 2018. (Chuck Kearns/Chatham Emergency Services via AP)

WASHINGTON — Nine Puerto Rico Air National Guardsmen were killed Wednesday when the C-130 they were flying into retirement crashed onto a Georgia highway, according to authorities.

The incident occured at approximately 11:30 a.m. just northeast of Savannah-Hilton Head International Airport, Air Force Capt. Jeffrey Bezore, a spokesman for the Savannah-based 165th Airlift Wing, said in a statement. The 165th is a Georgia Air National Guard unit that flies C-130s and responded to the crash alongside local emergency responders, officials said.

The plane came down at the intersection of Georgia Highway 21 and Crossgate Road in Port Wentworth, a small suburb north of Savannah, according to the Chatham Emergency Management Agency.

It narrowly missed people on the ground and sent an orange and black fireball into the sky. The fuselage appeared to have struck the median, and pieces of the plane's wings, which spanned 132 feet, were scattered across lanes in both directions.

The C-130 did not appear to have hit any vehicles upon impact, said Gena Bilbo, a spokeswoman for the Effingham County Sheriff’s Office, another nearby law enforcement agency that responded to the wreck.

“It is an absolute miracle at that time of day and at that intersection," she said.

Bilbo said the area surrounding the crash would be closed for the foreseeable future.

Eight hours after the crash, she added: "To our knowledge there are no survivors."

According to Bilbo, the debris field stretched 600 feet in diameter. The only part still intact was the tail section, said Chris Hanks, a spokesman for the Savannah Professional Firefighters Association.

A witness told the Savannah Morning News that the plane appeared to be flying very low before it crashed.

“I could see [the plane] above the tree line and it looked kind of low like it was curving in toward the street, but I see them all the time, so I didn’t think anything of it,” Mark Jones told the newspaper. “I looked down and then looked back up and it didn’t look like it nosedived, but it almost looked like it stalled and just went almost flat right there in the middle of the highway.”

Another witness, Chelsea Sinclair, described the plane as going “nose-first down,” telling The Island Packet newspaper of nearby Hillton Head Island, S.C., the impact shook the convenience store that she works in near the crash site.

"We were seeing a bunch of black smoke, but now it’s just EMS and fire trucks and police,” she told the newspaper.

Puerto Rico’s fleet of WC-130s is based at Muñiz Air National Guard Base in the city of Carolina. WC-130s, known as Hurricane Hunters, are turbo-prop C-130 cargo aircraft modified with specialized equipment for weather reconnaissance missions. They regularly fly into the eye of hurricanes to collect data that the National Weather Service uses to predict the storms’ paths and strength.

"The planes that we have in Puerto Rico – it's not news today that they are the oldest planes on inventory" of all National Guard planes nationwide, Rivera said. Puerto Rico's National Guard has five other similar planes, two of which need maintenance and aren't being used, he said.

It's too early to say what might have caused the accident, he said. The plane last received maintenance at the base in Savannah in April.

All nine crew members had helped with hurricane recovery efforts as part of the 198th Fighter Squadron, nicknamed the Bucaneros, Rivera said.

"This pains us," he said of the deaths. They aren't releasing names until all the families have been contacted, but "most of them already know and have come to the base."

Federal Aviation Administration spokesman Gregory Martin told The Island Packet that the plane was bound for Davis-Monthan Air Force Base in Arizona. He said the CW-130 was headed there for retirement.

The U.S. territory's Gov. Ricardo Rossello expressed his sadness, tweeting that "our prayers are with the families of the Puerto Rican crew."

President Donald Trump tweeted that he had been briefed on the crash, and sent "thoughts and prayers for the victims, their families and the great men and women of the National Guard."