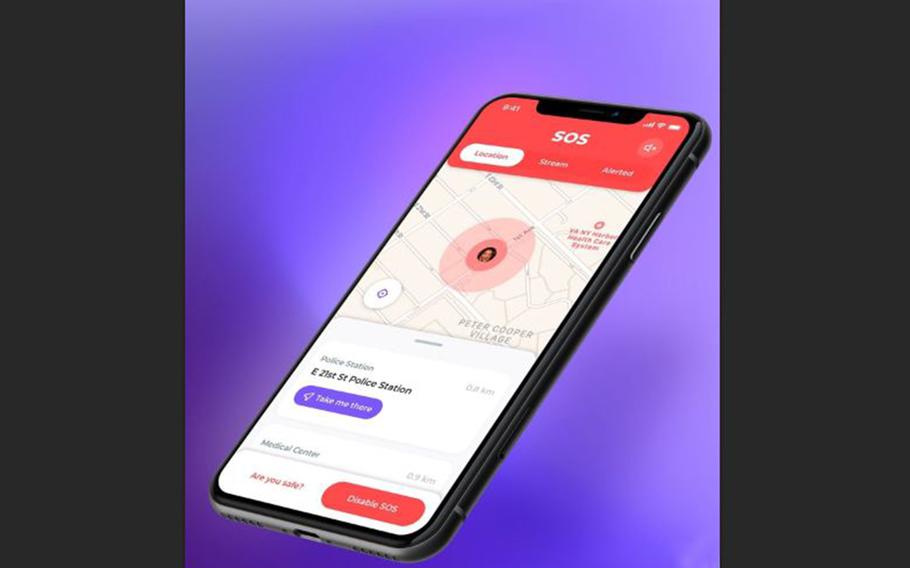 WASHINGTON — A new mobile app launched Tuesday claims to activate at the sound of a safe word and immediately alert a user’s friends, family and 911 in an emergency, as well as share the GPS location and livestream audio and video to selected contacts.

The creators of the app, UrSafe, want to improve personal safety and accelerate response times to sexual assaults and other violent crimes. Service members are a main component of their target audience.

“We’ve seen this crisis taking over not just in the military, but as a society as a whole, with assaults,” said Dr. Anthony Oyogoa, a physician and a cofounder of UrSafe. “We wanted to ask the question: What can technology do? I took the baton, and we’ve gone back and forth trying to create something we think starts the process of addressing this.”

In its simplest form, UrSafe costs users $3 each month. They’re instructed to create a safe word, which can be activated in an emergency by opening the app and saying the word aloud. The app is trained to activate only at the user’s voice, Oyogoa said.

When activated, the phone will automatically share their name and GPS location with emergency dispatch, as well as three friends or family members chosen by the user.

“We believe in those moments, it could save a lot of lives,” Oyogoa said. “Those are really critical moments.”

The app’s developers are also hoping — if it’s used widely enough -— UrSafe will become a deterrent to potential perpetrators.

While troops can download UrSafe like anyone else, Oyogoa and the app’s other developers are hoping to launch a military-specific version that would include a service member’s chain of command in the emergency alert, as well as civilian authorities. The military version of the app is complete; now UrSafe’s founders are waiting on military leaders to agree to use it.

Heath Phillips, an outspoken military sexual assault survivor, is throwing his support behind UrSafe. Phillips is a Navy veteran and advisory board member for Protect Our Defenders, a national organization dedicated to ending sexual harassment and assault in the military.

In recent months, Phillips has shared UrSafe’s message with several senators and House members on Capitol Hill. The law does not permit Congress to mandate the military use a privately owned app, but UrSafe’s goal is to have lawmakers encourage the Pentagon to test the app on a small scale and track outcomes before potentially broadening its use.

A Defense Department report released in May showed that 20,500 service members experienced sexual assault in 2018, up from 14,900 in 2016. Sexual assaults against female troops increased by 44% since 2016, with the highest increase affecting junior enlisted servicemembers.

UrSafe has “done the research and the work, and now we’re handing it to the military to say, ‘Here, let’s do this,’” Phillips said. “I think they should step up and initiate this. They’re always talking about ‘zero tolerance,’ and now they’re being offered a tool to help.”

The biggest benefit Phillips sees in the app is to help prevent the “he said, she said” of sexual assault reporting.

“As soon as you say your call word, everybody is getting an alert. Automatically, it’s audio. It’s video,” Phillips said. “If you’re getting beat up in a parking lot, they know what happened. Sexually assaulted? They know. A lot of cases get thrown out because there’s no evidence, no proof, and it’s his testimony versus her testimony. This right here is a game-changer.”

Phillips joined the Navy at 17. He was sexually assaulted soon after arriving at his first ship, and he spent months being beaten and raped by fellow sailors. He went AWOL and eventually accepted an “other than honorable” discharge to get out of the Navy. His discharge was corrected to honorable in 2018, nearly 30 years after the fact.

When Oyogoa shared UrSafe with Phillips, the Navy veteran thought back to his first time being assaulted.

“If I had this on my phone … I wouldn’t have been called a liar or went through 10 months of sexual assaults and beatings,” Phillips said. “The proof would’ve been there.”

UrSafe is available starting Tuesday through Apple’s App Store and on Google Play.