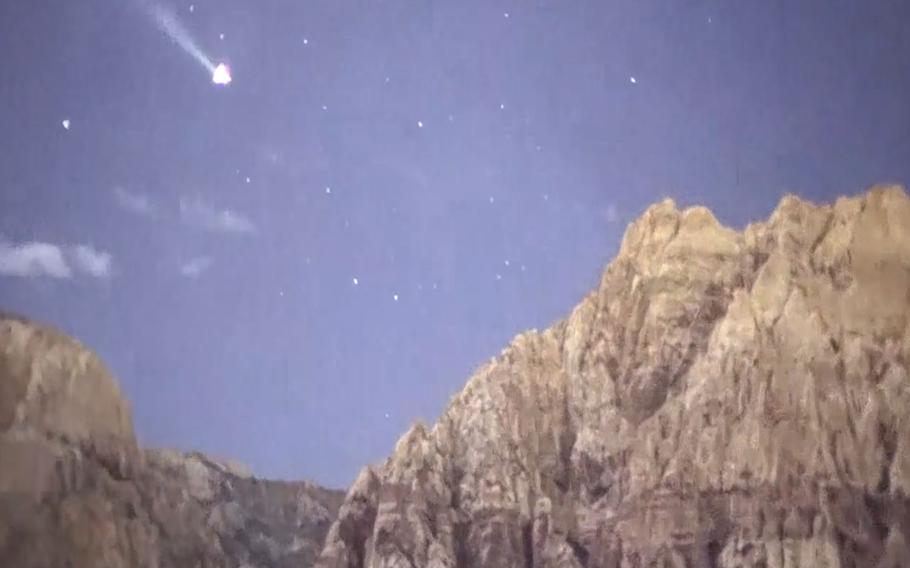 This still from a video shot using an x27 night vision system shows stars against a fully colored sky thanks to the system's ability to display color. (Courtesy of Sierra Pacific Innovations Corp.)

An online video posted by a maker of civilian and military imaging equipment shows a yellow road sign, green grass, a blue sky with fluffy white clouds — and twinkling stars.

Sierra Pacific Innovations Corp. filmed it at midnight near its Las Vegas headquarters using technology that could revolutionize troops’ ability to see and operate in the dark.

SPI, a producer of thermal imaging systems for the U.S. military and Department of Homeland Security, used a system known as x27 to capture the vividly-colored imagery. The company says its technology can amplify light to 85,000 times its original brightness.

SPI’s sensors “collect ultra-extreme amounts of light and translate them … into a clear, clean, bright image,” the company says on its website.

The video suggests a big improvement on night vision systems that the military has used in Iraq and Afghanistan in recent years to capture and intensify photons of ambient light. The x27, by contrast, employs an extra-sensitive version of the image sensor found in many digital cameras.

Troops are used to seeing grainy, green monochrome when they use night-vision goggles on the battlefield. They’ve complained about a lack of depth perception and poor performance when there’s not enough ambient light. And older night-vision technology was also susceptible to sudden shifts in lighting conditions: Bright lights could damage the image intensifier or temporarily blind a soldier.

Color night vision could help troops identify potential threats, said Brian Jaynes, a former combat medic who deployed to Iraq in 2009 with the Army’s 2nd Infantry Division. It could help sentries discern a friendly fighter from an enemy soldier or a civilian, for example.

“Is that person approaching our checkpoint wearing the camo pattern of an allied nation or is that a dirty [thawb]?” he said, referring to a ubiquitous garment of the Middle East.

Jaynes said it could also help identify vehicles from the [be-on-lookout list] of suspect vehicles that typically lists make, model and color.

Color night vision could also come in handy during patient assessments at night, he said.

“Is this blood or did my patient lose bladder control due to [traumatic brain injury] or is it just Gatorade they spilled when they took fire? We had no way of knowing short of turning on a light,” he said.

Color night vision is part of a broader move away from warfare as an individual activity toward a clash of “techno-human” systems, Arizona State University engineering professor Braden Allenby said in an email last week.

“It is the enhanced capabilities of networks of warriors and their technologies that will provide the edge,” he said.

SPI’s color night-vision system is the size of a small video camera and mounted on a tripod in promotional photos so it’s unclear how soon it could make its way to the field.

ColorTAC’s CVA-14 clips onto the goggle and, by spinning two color filters in unison, produces an image that remains grainy, but adds color.