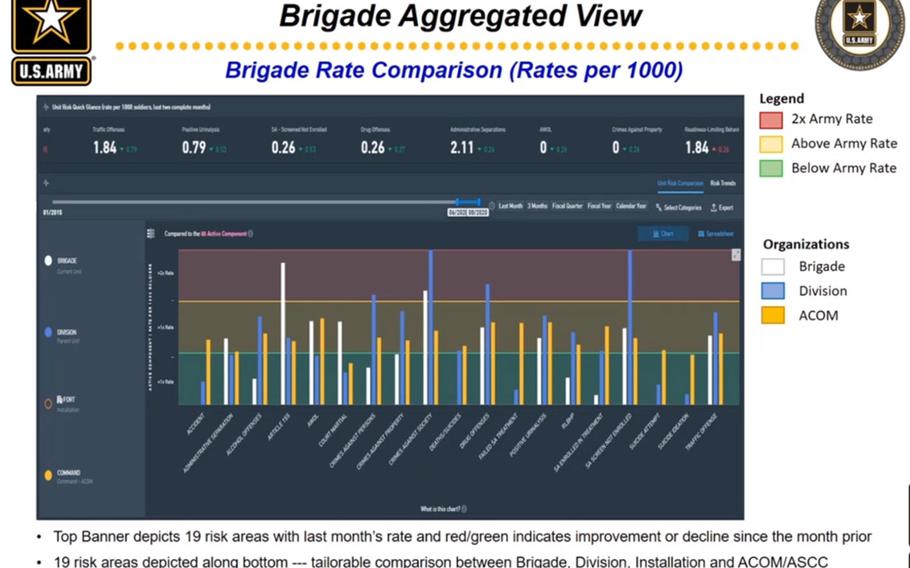 A screen capture from a DOD video explaining the features of the Commanders Risk Reduction Toolkit. (DOD)

WASHINGTON – A new digital tool that the Army is providing its commanders this month will give them a one-stop dashboard with their soldiers’ detailed military and personal histories so they can better gauge issues that impact their unit’s combat readiness.

Army officials said this week that the Commanders Risk Reduction Toolkit, or CRRT, will help company and battalion commanders better understand their individual soldiers, which could help them mitigate potential risky behaviors or other issues that could hurt their combat readiness. CRRT is the latest in a six-year project meant to help commanders reduce risk in their units, said Randy Lane, the chief of analytical assessments for the Army, who unveiled the new platform Wednesday during the virtual version of the Association of the U.S. Army’s annual meeting and exposition.

“It provides a consolidated picture of soldier risk and trends that are intended to help leaders develop proactive strategies to reduce high-risk behaviors and strengthen soldiers in units,” Lane said during a virtual explainer video of the new toolkit. “This comprehensive picture helps command teams identify any risk history and strong performers who can help them sustain [combat] readiness and possibly reduce risk across their formation.”

The dashboard gives commanders access to some 40 categories of information about their soldiers pulled from multiple databases. Commanders will be able to view soldiers’ deployment histories, promotion timelines, awards that they have earned in service, and past scores on assessments like fitness tests and marksmanship qualifications. They will also have access to health histories such as injuries, and information detailing any criminal activity, alcohol or drug abuse, suicide attempts, domestic violence incidents and abuse histories. The program will also include information about factors that could prevent a soldier from deploying, such as medical issues, duty-limiting prescriptions or the need for further training.

It will not provide most protected medical information. For example, CRRT would identify a soldier as taking a duty-limiting medication, but it would not provide the commanders information indicating the specific name of the prescription or what diagnosis it treats, according to the Army.

Company and battalion commanders will have access to individual soldiers’ information. But at the brigade level and above, commanders will only have access to aggregate information about soldiers across their entire force. Lane said this will help them compare their units with combat readiness levels of other formations across the Army and potentially identify problematic trends within their units.

The data could “alert those leaders that there may be a problem” somewhere within their force, if there are high rates of certain behaviors, such as suicide attempts or drunken driving arrests, he said.

Lane said the system would be fielded by the end of October to all active-duty Army commanders. Commanders in the Reserve and National Guard should receive it by early 2021, he said.

The CRRT will continue to be adjusted in the coming months as the Army takes feedback from commanders using the new tool, Lane said.

He said he hoped the toolkit would allow commanders to better understand all the factors that might impact how a soldier performs his or her job so they can then link that individual with experts who can assist them with facing their challenges.

“Snapshots like these could potentially help command teams identify financial issues coupled with a dip in duty performance or potential medical issues that could be linked which provide signals that there are issues with this soldier,” Lane said. “It will help [commanders] visualize the soldier’s risk history to take proactive steps to strengthen them or link them up with [the right] individuals for support.”