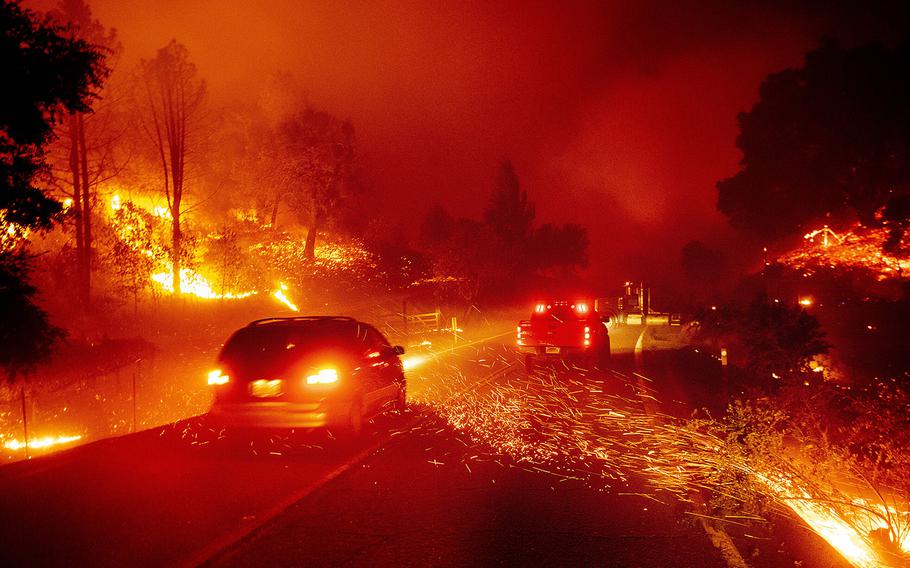 Embers fly across a roadway as the Kincade Fire burns through the Jimtown community of Sonoma County, Calif., Oct. 24, 2019. (Noah Berger/AP)

The California National Guard activated 470 service members to support efforts to fight the fires that have spread across 66,000 acres in Sonoma County in the northern part of the state, service officials said Monday.

Service members responded during the weekend as the fire, which began Wednesday, grew in size through Monday as wind gusts reached 50 mph, said Lt. Col. Jonathan Shiroma, spokesman for the California National Guard.

“All of our units throughout the state are aware of what’s going on and are ready to go if called upon,” he said of the increased wildfire activity across California.

The state has 4,100 personnel and 440 fire engines battling the blaze, known as the Kincade Fire, which has already claimed 40 homes, according to the California Department of Forestry and Fire Protection, known commonly as Cal Fire.

Guard members are primarily supporting law enforcement and helping with traffic in the Sonoma area, where about 180,000 people face evacuation orders. The Guard also has aircraft prepared to make medical evacuations if needed. Another aircraft crew is on call to participate in aerial water drops over the fire, he said.

While the Guard doesn’t have any facilities in the path of wildfires, Shiroma said two soldiers with homes in the evacuation area are receiving support from the service as they get out of harm’s way.

“We’ve had a below average fire season to date,” Gov. Gavin Newsom said Monday during a news conference. “What we’re experiencing at the moment is above average.”

In the last 24 hours, the state has put down 330 fires, he said, noting that late October and early November have historically brought some of the worst fires in California history. He declared a statewide emergency prior to the news conference, which helps people impacted by the fires gain access to recovery resources.

The stress of heightened fire danger for residents has been exacerbated by power shutoffs from Pacific Gas & Electric Co. in an effort to prevent fires from spreading, Newsom said. On Monday, about 880,000 customers across the state were without power.

Department of Veterans Affairs Secretary Robert Wilkie wrote a letter to Newsom to express his concern on the impact power shutoffs could have on the state’s 1.6 million veterans and their families, as well as the medical professionals who provide care to veterans.

“While VA facilities possess back-up power capabilities, VA cannot ensure the same for individual veterans and community care partners. Power outages could become dangerous for veterans receiving in-home care and those who rely on power for refrigeration of life-saving medications like insulin,” Wilkie wrote. The uncertainly the outages create is “extremely troubling.”

He reiterated the VA would continue to provide services, but asked Newsom to restore “power certainty” to the state, including its veterans.

Cal Fire Director Thom Porter said during the news conference that they are working with PG&E to get the power on “as soon as it’s safe to do so.”

Before power can be restored, the state must send personnel to check the distribution lines, Newsom said, and the state is supplementing the efforts with National Guard aircraft to do so.

“We hope within the next 48 hours to be substantially complete,” Newsom said.

Aside from the Kincade Fire, Cal Fire is fighting five other fires. Four of the five are at least 70% contained and the 350-acre Burris Fire in Mendocino County is 20% contained.

In the southern part of the state, the 618-acre Getty Fire, near Los Angeles, is under the responsibility of local agencies. They have not asked for National Guard support, Shiroma said. That fire ignited Monday morning and is not contained at all, according to the LA Fire Department.

Los Angeles Air Force Base, home to the Space and Missile Systems Center, said the base has not been impacted by fires or power outages, according to the base public affairs office.