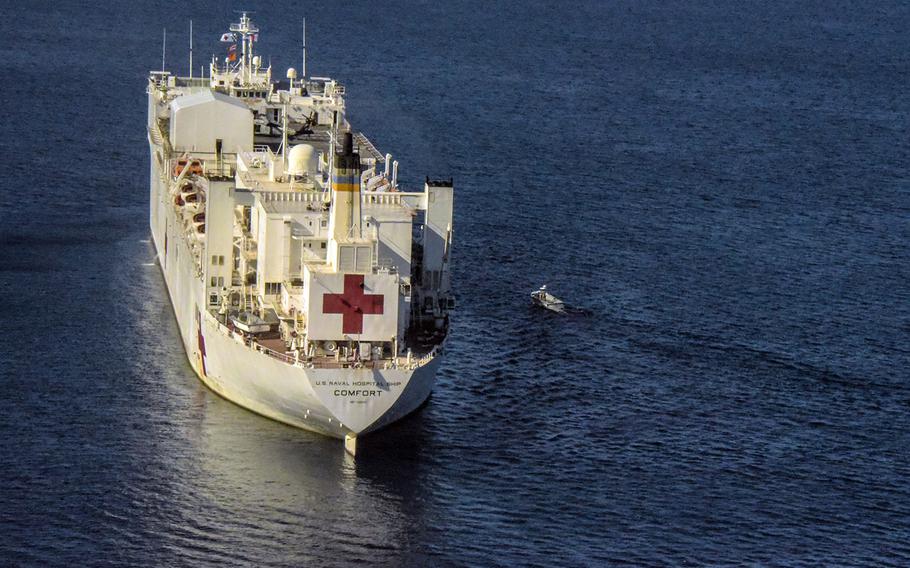 In a December, 2018 file photo, the USNS Comfort is seen off the coast of Honduras. (Maria Pinel/U.S. Army photo illustration)

WASHINGTON — The Pentagon will dispatch a Navy hospital ship carrying hundreds of doctors and nurses to South America next month where it will be tasked with treating Venezuelans fleeing that nation’s economic and growing political crises.

The USNS Comfort will leave its home port in Norfolk, Va., in June for a five-month humanitarian mission through the Caribbean, Central America and South America, U.S. Southern Command announced Tuesday. The deployment will mark the ship’s second mission to the region in recent months, as it treated thousands of Venezuelan refugees in late 2018 while visiting Honduras, Colombia and Ecuador.

The announcement was made as Vice President Mike Pence delivered a speech at the State Department demanding Venezuelan President Nicolas Maduro’s removal from power in favor of opposition leader Juan Guaido, who the United States and other nations have recognized as the country’s legitimate leader. Pence offered the possibility of relief from U.S.-imposed sanctions to Maduro regime leaders who denounce their president and aid the opposition.

“To those who continue to oppress the good people of Venezuela, know this: All options are on the table,” he said.

Acting Defense Secretary Pat Shanahan has declined to discuss in detail the military options that the Pentagon has considered for Venezuela. He said Tuesday that the Comfort’s deployment was part of a “full table” of possible plans.

While it is a Navy ship and carries military personnel – primarily medical professionals – the USNS Comfort is not a warship and is operated by a civilian crew from the Military Sealift Command. Officials said Tuesday that it would take several weeks after its deployment for the Comfort to reach South America, and they did not disclose planned port calls for the ship.

Shanahan met Tuesday with Colombian Vice President Marta Ramirez at the Pentagon, where they discussed ongoing events in Venezuela, including Maduro’s military, the acting secretary said.

“The message I want to make sure comes across is that we are very well coordinated and disciplined, and have a broad set of contingency plans” on Venezuela, Shanahan said. “It’s very hard to predict the future, right? And so for every single option you want to have a plan. I think we’ll do some good coordination and communication today [with the Colombians] to kind of validate the work that’s in front of us.”

Shanahan and Pence stressed the United States is seeking a peaceful transition of power in Venezuela, even after protests in support of Guaido last week sparked violence.

Pence described images of an armored vehicle plowing into a group of unarmed protesters in Caracas on May 7, calling the scene “heartbreaking” and “deeply troubling” as he laid the blame squarely on Maduro.

“The single greatest disrupter of peace and prosperity in the Western Hemisphere has come from the regime of Nicolas Maduro and their desperate attempts to cling to power,” Pence said. “Nicolas Maduro is a dictator with no legitimate claim to power. And Nicolas Maduro must go.”