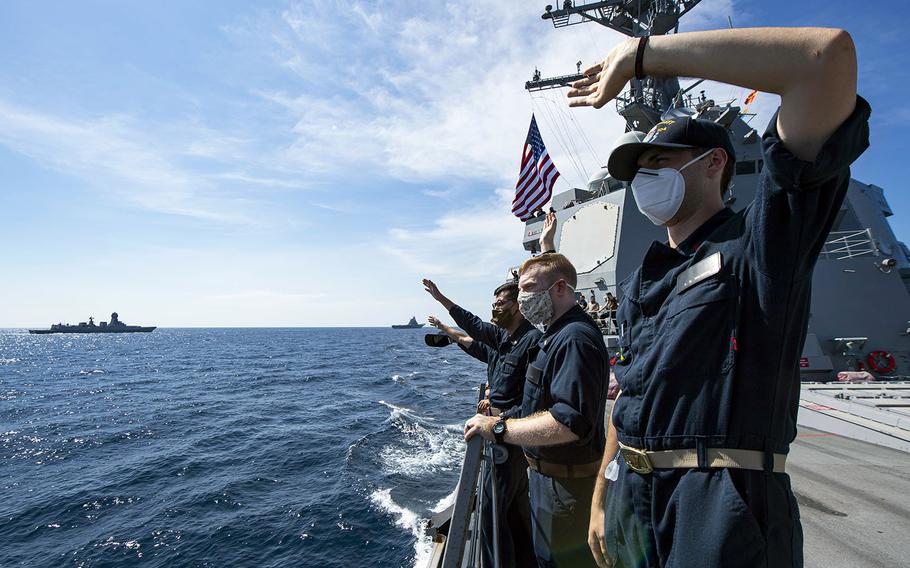 In a Nov. 20, 2020 photo, sailors on board the guided-missile destroyer USS Sterett wave to the crew of an Indian Navy vessel during Malabar 2020. (Drace Wilson/U.S. Navy)

WASHINGTON — The Navy will allow some enlisted sailors serving in overstaffed jobs to apply to leave the service before the end of their enlistment contract, the service has announced.

The Navy hopes granting some enlisted sailors an early release from their enlistment commitment will ensure promotion opportunities for sailors who intend to remain in the Navy without forcing people from the service involuntarily, according to a service news release. Early separations will be considered on a case-by-case basis, the service said.

“As the Navy has grown over recent years, some enlisted ratings at specific pay grades have become overmanned due to high retention in these ratings,” Vice Adm. John B. Nowell, the Navy’s chief of personnel, wrote in a Nov. 19 memorandum. “Fleet readiness is our No. 1 priority while also allowing for a flexible marketplace of talent management.”

The Navy will publish further information about sailors who might be considered for early separation in the coming weeks. Such information including identification of overstaffed jobs and year groups will be posted on the Navy Personnel Command website, the Navy release said.

Officials said the Navy will offer several paths to early separations, but they expect most to be granted via the recently reestablished Early Enlisted Transition Program, which grants early separations on a first-come, first-served basis based on quotas determined by a sailors’ job, rank, year group and skills.

Other pathways would allow enlisted sailors to request early separation to go to college, to pursue a commission or a change to another service. Sailors who intend to commission or transfer military services would have to apply for a “conditional release,” which can only be approved by Navy Personnel Command, the service said. Sailors interested in those possibilities should submit requests to that command through their commanding officer, according to the memo.

Sailors facing forced rating changes with less than a year left in the service would also be able to apply for early separation, according to the service. Those sailors would have to request to be separated immediately and would forfeit any bonuses that required them to complete the full terms of their enlistment.

The Navy is also encouraging sailors who might apply for early separation to consider instead a transfer to the Reserve or a change in specialty.

“All sailors considering early out options are also highly encouraged to seek conversion to other ratings for which they are eligible and qualified,” Nowell wrote in the memo. “Command career counselors and enlisted community managers are available resources for determining the ratings for which a sailor is best suited.”