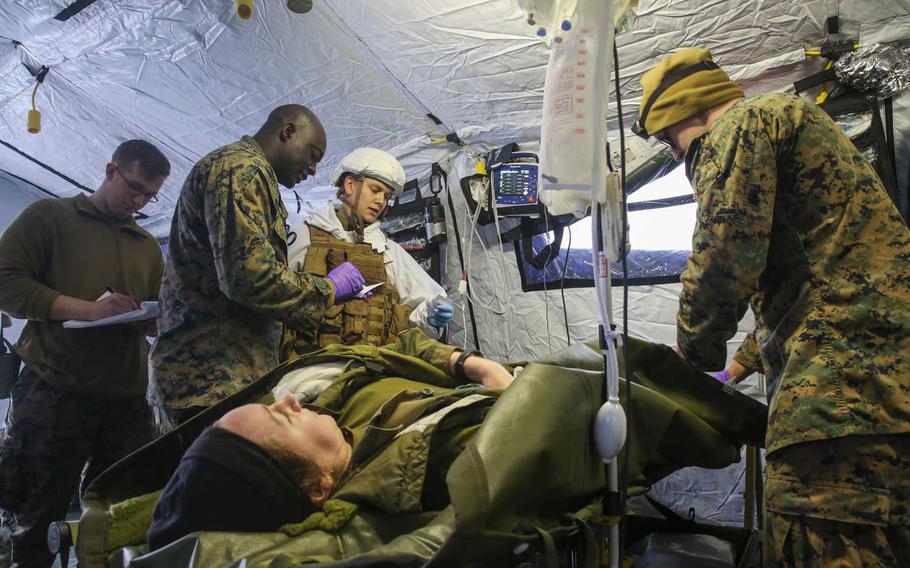 U.S. Marines and sailors with the 2nd Marine Expeditionary Brigade conduct notional medical care on a simulated Norwegian soldier casualty during combat casualty care training in Rena, Norway, Feb. 17, 2016. Two veterans have filed a lawsuit against the Navy for not assigning accurate disability ratings and costing them benefits in a case that could affect thousands of sailors and Marines. (Lucas Hopkins/U.S. Marine Corps)

WASHINGTON — Two veterans have filed a lawsuit against the Navy for not assigning accurate disability ratings and costing them benefits in a case that could affect thousands of sailors and Marines.

“Military disability retirement benefits are critical to veterans who are injured during their military service, and who depend on them for access to health care and other benefits for the service member and his or her family,” according to a statement by the nonprofit National Veterans Legal Services Program, whose attorneys filed the lawsuit Nov. 10 in the District Court for the District of Columbia.

The lawsuit states the Navy was not following its own regulations between April 30, 2002, and June 27, 2019, for assigning disability ratings for conditions that prevented a sailor or Marine from continuing to serve in the military.

The two plaintiffs named in the lawsuit, former sailor Kenneth Springs and former Marine Nathaniel Reese, suffered from medical issues during their service that made them “unfit” to continue their work and leave the military. They are suing the Navy because they received a combined disability rating that was lower than what they were required to receive, according to the lawsuit.

The attorneys representing Springs and Reese said they believe that based on Navy records at least 16,851 sailors and Marines left the military within the last six years who might have received a lower total disability rating with fewer benefits than they should have because their conditions were not rated correctly.

Springs and Reese were not able to medically retire due to the lower combined disability ratings that they were given for their medical issues. They want their military records, and those of the thousands of other veterans who fall under the class-action suit, to be corrected to show the combined disability rating that they should have received by the Navy, and in some cases could allow them a medical retirement.

Navy officials on Tuesday did not respond to a request for comment about the lawsuit.

After a medical condition is evaluated on how it affects a service member’s ability to do continue their job, the Navy assigns the condition to one of four categories. The two most important for benefits are Category I, or “all unfitting conditions,” and Category II, or “those conditions that are contributing to the unfitting condition,” according to the lawsuit. So a sailor or Marine can have one main medical issue that makes them unfit for service and also have additional medical conditions that are related to the main medical issue.

Conditions in both categories are then supposed to be given a disability rating between 0% to 100%. When combined, the rating can initiate disability benefits for the sailor or Marine. If the service member receives a combined rating between both categories of at least 30%, they are entitled to a disability retirement, which includes health care. If they receive less than 30% combined, they can be medically separated with a one-time severance payment but without health care, according to the suit.

For example, Springs suffered from flat feet and the boots that he had to wear caused bunions and hammer toes that deformed his feet. He had to undergo multiple surgeries from which he never fully healed, according to the suit. His two bunions were each placed in Category I for a 20% disability rating, but his other conditions were placed in Category III, meaning they did not relate to his main medical issue, and received no ratings. He was later able to get one of the conditions moved to a Category II and rated at 10%, but it was never added to his combined disability rating, which would have allowed him to have a medical retirement.

The lawsuit alleges the Navy did not assign any disability ratings to conditions that fell under Category II for 15 years, against its own regulations.

Bart Stichman, the National Veterans Legal Services Program executive director, said in a prepared statement about the lawsuit: “The Navy’s denial of benefits is not simply a bureaucratic matter. A denial can have negative repercussions in the lives of service members and their families for many years.”