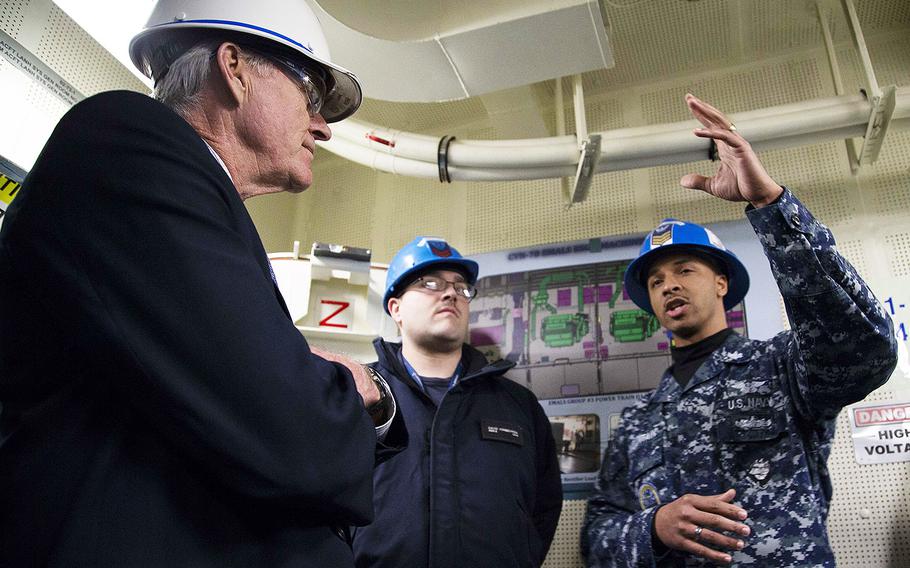 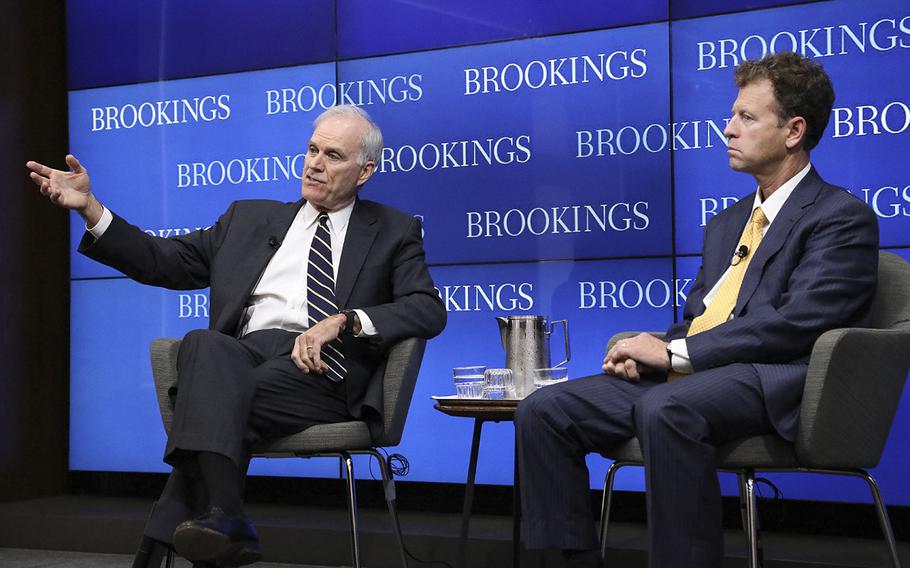 Navy Secretary Richard Spencer, left, speaks before an audience Wednesday at the Brookings Institution, a Washington think tank, for a discussion about the U.S. Navy in an era of great power competition. (Caitlin M. Kenney/Stars and Stripes) Navy Secretary Richard Spencer speaks before an audience Wednesday at the Brookings Institution, a Washington think tank, for a discussion about the U.S. Navy in an era of great power competition. (Caitlin M. Kenney/Stars and Stripes)

“I look at her and other leadership on [Capitol] Hill who continually disparaged the Ford as a program, and I get a little upset,” he said during a discussion at the Brookings Institution, a Washington, D.C., think tank. “You could not ask for a better disinformation program for our competitors. And I truly mean that.”

Tuesday during a House Armed Services Committee subpanel on readiness, Luria, D-Va., questioned the Ford’s costs and delays, including the ship’s troubled elevators. She called the Ford — the newest aircraft carrier being constructed by the Navy — “a nuclear-powered floating berthing barge that’s not deployable because of the aircraft elevators and the yet untested dual-band radar, catapults and arresting gear.”

On Wednesday, Luria issued a statement responding to Spencer’s comments. She pointed out that Spencer had made a promise to President Donald Trump in January that the weapons elevators on the Ford would be functioning by the end of summer, but they still are not.

“I find it disappointing that the secretary finds congressional oversight disparaging,” Luria said in the prepared statement. “I have yet to see a detailed plan to fix the multitude of problems with these new technologies. The Navy accepted the design of these systems and accepted the ship in an incomplete state…so it is absolutely my role to question Navy leadership on their current failure to deliver an operational ship to the fleet.”

About $13 billion has been invested in the ship, according to Luria. The ship’s 11 weapons elevators, which are needed to load ordnance on planes, have been a problem for years. The Navy commissioned the ship in July 2017 without any working elevators. The ship’s electromagnetic catapult system for launching aircraft has also faced issues.

Vice Adm. Thomas Moore, commander of Naval Sea Systems Command, said during the Tuesday hearing that the Ford was originally planned to be delivered in 2013 and deployed in 2018.

“And best estimates, we’re looking at 2024?,” Luria asked Moore about the Ford’s deployment.

Spencer said Wednesday that a fourth elevator on the Ford can now be used by the crew and “everything will be working” when the ship is operational.

He said he found Luria’s comments disparaging because they were not “how can I help?”

“If she wants to get on board and help…we have open arms,” Spencer said. “We need everyone to realize that these are massively complex systems. Did we do things wrong? Yes, we did things wrong. We put a price cap on there.”

However, Luria did ask Moore during the Tuesday hearing what he needed to help get the aircraft carrier to deploy on time. Moore responded the shipyards had the capacity to do the job.

But at Brookings, Spencer lashed out at Defense Department funding and the temporary spending measures known as continuing resolutions with which the agency has been limited.

He said the Defense Department has had to adapt to continuing resolutions in place of a full defense budget and now Congress believes the Pentagon “can handle CRs with absolutely no problem at all.”

Spencer said a Navy study determined the nine continuing resolutions forced on the Pentagon in recent years have cost the service an additional $4 billion.

“So when I get accused of cost overrun on the Ford by my board of directors and they go and burn $4 billion, I’m confused as to who is responsible for wasting or diddling with resources,” he said. “It is an atrocity that a CR exists.”