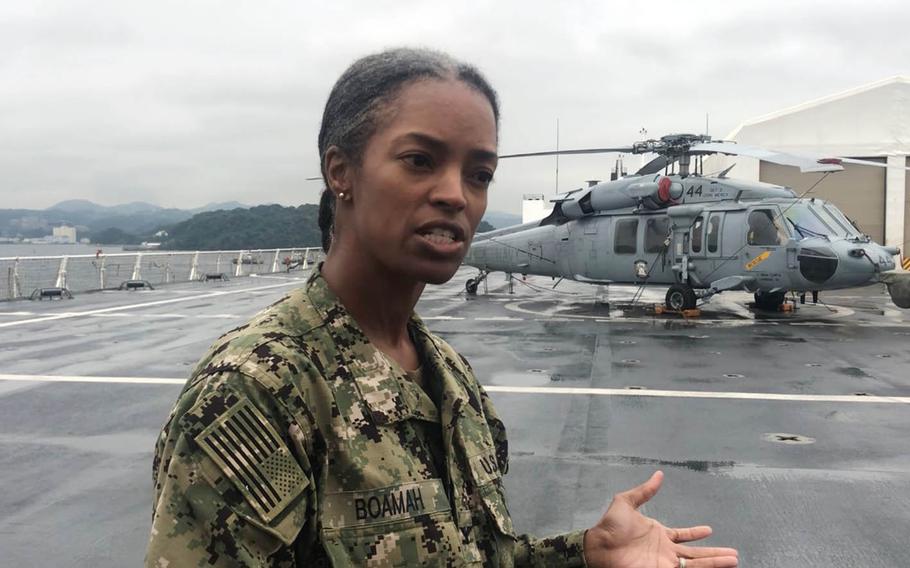 Capt. Lynelle Boamah, executive officer of the USNS Mercy, speaks aboard the hospital ship during its recent visit to Japan. (Caitlin Doornbos/Stars and Stripes)

Capt. Lynelle Boamah, executive officer of the USNS Mercy, speaks aboard the hospital ship during its recent visit to Japan. (Caitlin Doornbos/Stars and Stripes) 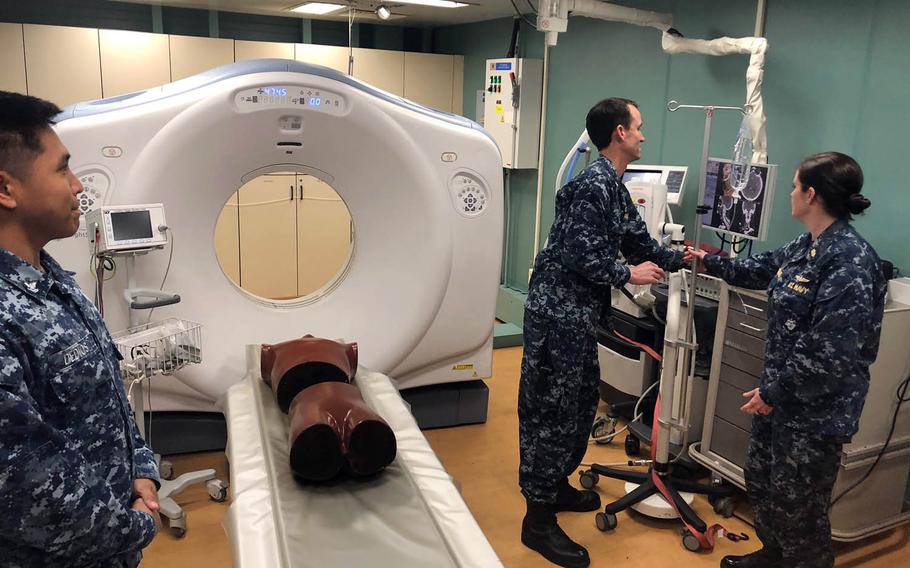 Sailors demonstrate the CT scanner aboard the USNS Mercy on the hospital ship during a port visit to Yokosuka, Japan, on June 15, 2018. (Caitlin Doornbos/Stars and Stripes) 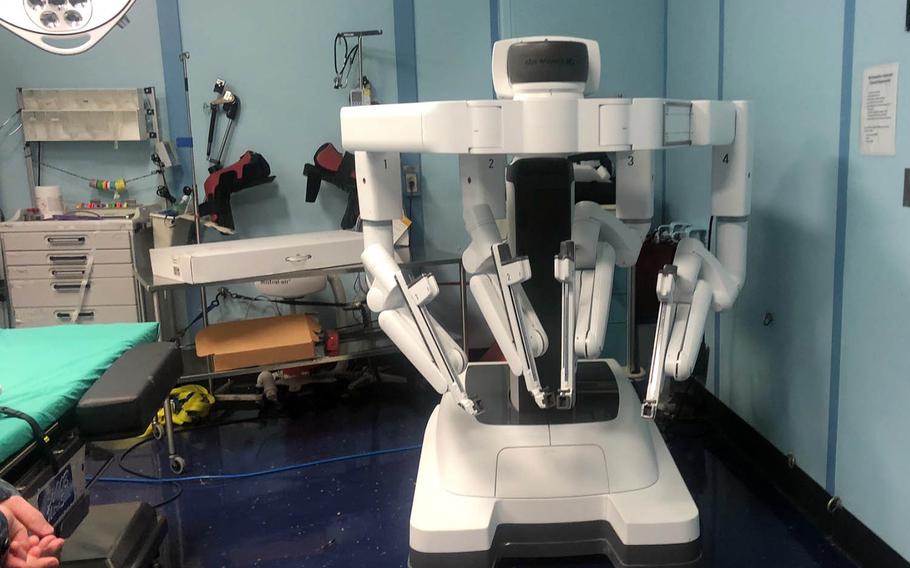 The USNS Mercy brought a robotic surgery system aboard for Pacific Partnership 2018. Doctors performed about 10 robot-assisted surgeries over the three-month mission. (Caitlin Doornbos/Stars and Stripes) The Navy now says it will retain both of its hospital ships, following objections from legislators after the service discussed decommissioning one of the 1,000-patient vessels earlier this year.

Created to serve as floating hospitals during times of war, the USNS Mercy and USNS Comfort are devoted during peacetime to humanitarian efforts such as the Mercy’s biennial Pacific Partnership mission and the Comfort’s deployment to Puerto Rico after last year’s Hurricane Maria. They are the largest hospital ships of any military in the world.

But the Mercy and Comfort are aging. Navy leaders floated the idea of cutting one to save money, but received pushback at a March hearing before the House Armed Services Committee.

“While the Chinese are making a strategic shift to not just pay off the leadership of countries but to provide services to the citizens of the countries, for the U.S. to pull back on that soft power side, I think it’s just a strategic mistake for us,” Rep. Austin Scott, R-Ga., said at the hearing, referencing recent humanitarian work in Africa by China’s hospital ship, Peace Ark.

The Navy now says it will keep its hospital ships in service — and even plans to make about $6.4 million in improvements to the Mercy, according to a fiscal year 2019 budget submission.

“At this time, USNS Mercy and USNS Comfort are not scheduled for deactivation,” Navy spokeswoman Lt. Lauren Chatmas told Stars and Stripes on Thursday. “The [proposed FY 2019] budget includes plans to extend the service life of USNS Mercy.”

Floating hospitals The 894-foot-long, 69,360-ton ships were once oil tankers that were gutted and remade into hospital ships and commissioned in 1986 and 1987, respectively.

Inside, visitors can easily forget they are on a ship; aside from the straps anchoring gurneys to the floor in operating rooms, the Mercy looks – and operates – much like a typical American hospital ashore.

The ships also have the most up-to-date medical technologies – including CT scanners – onboard to ensure medical professionals will have seamless transitions should they be brought aboard in sudden emergencies.

During this year’s Pacific Partnership — a 150-day multinational mission that brings together military medical personnel from various nations to provide healthcare and work with professionals in select Pacific countries – the Mercy carried a robotic-assisted surgery machine loaned to the ship for free by the robot’s maker, Intuitive Surgical.

When not activated, the hospital ships go into reduced operating status with about 60 civilians and sailors assigned to each ship to keep them maintained. If called upon, the Mercy and Comfort would need five days of preparation before they could deploy. They sail at about 17 knots, or about 19.5 mph.

Increasing capabilities While the ships are safe for now, the Navy is still looking at ways to better serve patients while taking into consideration its modern warfare techniques, Vice Adm. Bill Merz, deputy chief of Naval Operations for Warfare Systems, told legislators during a House Armed Services hearing in April.

“We have made plans to do a service life extension of both ships … ” he said. “The problem with those ships is, there’s only two of them and they’re big, and we’re moving to a more distributed maritime operations construct.”

To consider their options, the Navy commissioned a “requirements evaluation team” this spring. Merz said at the April hearing that one of the requirements under consideration was mandating the ships to support V-22 Ospreys, which can accommodate nearly 20 more seated passengers than an SH-60 Seahawk.

“There’s no lack of commitment,” he said during the hearing. “As a matter of fact, we’re taking a look at the capabilities and whether they are in line with the way we plan to fight our future battles.”

Discussions have varied on how to fill the new requirements, including whether the Navy should employ several smaller hospital ships instead of or in conjunction with the two large ships, Rep. Rob Wittman, R-Ga., said at the hearing.

Capt. Lynelle Boamah, the Mercy’s executive officer, told Stars and Stripes during the ship’s recent visit to Yokosuka that the flight deck will be modified to support tilt-rotor Osprey aircraft by 2020.

The Mercy now deploys with two SH-60 Seahawks helicopters, but the changes would allow the ship to welcome two Ospreys on board instead.

“[The flight deck] will be restructured – lengthened – and prepared to receive the Osprey helicopter,” Boamah said. “We are really looking forward to that because it’s really going to increase our capability and capacity to do even more good for the warfighter and also in support of citizens from the host nations that we would service.”

Mission accomplished The Mercy finished the last of its five-country Pacific Partnership 2018 port calls this week in Japan, where it hosted citizens for ship tours and conducted professional exchanges with members of the Japan Maritime Self Defense Force. It was the first time the vessel had visited the country in its more than three decades of service.

Since the mission began in February, the Mercy has also visited Sri Lanka, Indonesia, Malaysia and Vietnam, conducting medical care for more than 12,000 citizens and hosting professional exchanges with healthcare providers at each stop, said Capt. David Bretz, mission commander of Pacific Partnership 2018.

Many nations, including Great Britain, Australia, Canada, Peru, Sri Lanka, Japan and France, sent members of their militaries to embark on the Mercy and work side by side with the more than 800 Americans assigned to the mission.

The Mercy will next participate in multinational Rim of the Pacific exercise in Hawaii before returning to its San Diego homeport.

It is unclear when the ship will undergo its planned service-life extension. The USNS Comfort remains at its Norfolk, Va., homeport in reduced operating status.