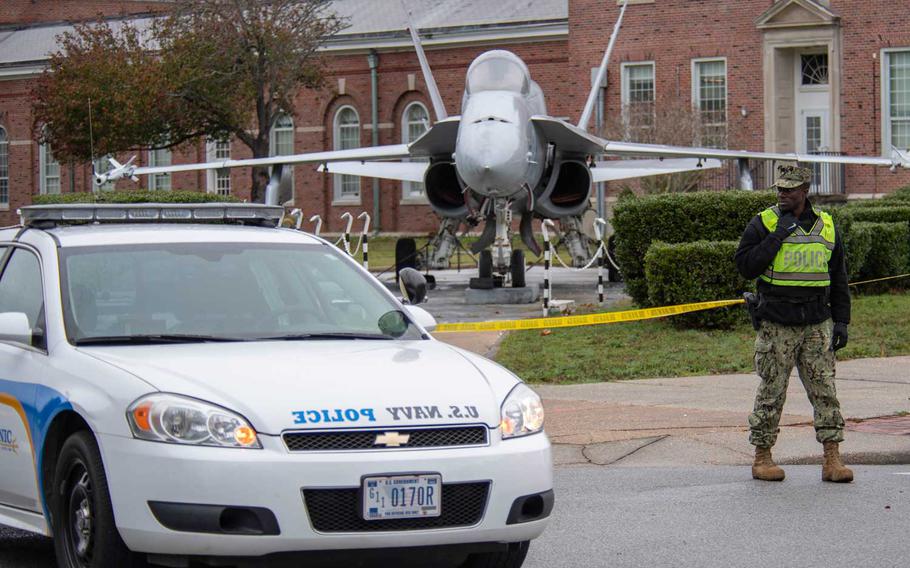 WASHINGTON — A breakdown in oversight of foreign aviation students and a culture of harassment and cultural insensitivity potentially contributed to the deadly shooting at Naval Air Station Pensacola, Fla., in December 2019, according to a new investigative report.

The Navy’s 267-page report of the investigation by Rear Adm. John Meier, commander of Naval Air Force Atlantic, looked into the circumstances leading up to the shooting and what could be done to prevent another attack in the future.

The Navy’s report, which was released Friday, stated the primary cause for the shooting was Royal Saudi Air Force 2nd Lt. Mohammed Saeed Alshamrani’s self-radicalization. This included his social media activity and radical posts, according to the report. Though Attorney General William Barr stated in January that the shooting was a terrorist attack and Alshamrani was motivated by jihadist ideology, the investigation found he did not come to the United Sates for terrorist reasons based on the amount of time that he was in the country and number of opportunities that he had to carry out an attack.

In addition to Alshamrani’s actions and behaviors, the report also stated a lack coordination and risk assessments across training commands likely increased the possibility of him committing an insider attack.

“Military leaders, government employees, contracted employees, peers, and civilians knew of isolated events and indicators, but all remained unaware of a complete picture of 2nd Lt. Alshamrani’s potential threat indicators. While these indicators are apparent in hindsight, they were not evident in aggregate before 6 December 2019,” the report states.

On that morning, Alshamrani went to one of the aviation training school buildings at NAS Pensacola with a Glock-45 9mm handgun that he lawfully purchased but illegally brought onto the base. He moved throughout the building for several minutes, killing three sailors and injuring eight others before a local sheriff’s deputy shot and killed him.

Alshamrani had been in the United States for naval aviation training since 2017, according to the report. There are more than 5,100 foreign nationals from 153 countries in the United States for Defense Department security cooperation-related training, Pentagon spokesman Chris Garver said a few days after the incident. About 200 foreign nationals were at the base at the time of the attack, according to Capt. Timothy Kinsella, the commanding officer of NAS Pensacola.

Following the attack, former Defense Secretary Mark Esper ordered a review of security precautions at all military installations and facilities and a review of vetting procedures for foreign nationals training in the United States.

The Navy temporarily halted training for about 300 Saudi aviation students at three Florida bases following the shooting. Additionally, 21 Saudi students training in the U.S. were sent back home after an FBI investigation found anti-American sentiment in social media posts or child pornography.

The Navy’s new report found while Alshamrani had been in training at NAS Pensacola for 18 months, he reported to five separate commands, which limited oversight by individual commanders and kept critical information about him isolated in those commands. The investigation recommended reports and files be shared more efficiently, including more digitalization so commanders have a better overall understanding of student trainees as they progress.

Harassment and cultural insensitive actions were also prevalent in the foreign student program. Alshamrani was nicknamed “pornstache” by a contracted instructor and Alshamrani filed an equal opportunity complaint in April 2019 against him, according to the report. The contractor was given a corrective action memo and apologized, however Alshamrani was frustrated it took almost 40 days for remediation and he felt the apology was insufficient, according to the report.

The investigation also found all students at Naval Aviation Schools Command at NAS Pensacola had to deal with a bad climate in the unit and the international military training office was found to contribute to it.

“[International military training office] personnel subjected [international military students] to derogatory and sometimes abusive comments as well as humiliating public reprimands. While U.S. military and civilian leaders were aware of [student] complaints, they did not proactively intervene and correct the [office] staff.”

Alshamrani was able to purchase a gun legally on July 20, 2019, due to current federal law, however he illegally brought the weapon onto the base and stored it at his temporary base home. The report states a contracted instructor was present when he applied for the gun, however the instructor did not know the fire arms policies for the foreign students. Following the shooting, Esper issued a policy memo that prohibits foreign military students and their families from having, transporting, or using personally owned firearms, according to the report.

The investigation also found the Royal Saudi Air Force country liaison officer responsible for maintaining good order and discipline of the students had left in September 2019 and the billet was not filled until January 2020. Without the officer, there was a marked decline in the military discipline of the Saudi students. The report states if the liaison officer had been there, that person might have been able to provide better oversight of Alshamrani and intervened.

The report also recommended the Defense Department and State Department review creating a policy that requires psychological and behavioral tests for foreign military students training or working in the United States. While it’s not clear that the tests would have shown Alshamrani as a threat, the report states it could have “identified critical traits” that could have made it easier to understand his demeanor and associated risk.