Navy OKs ‘neck tats’ for all, sleeve tattoos for recruiters 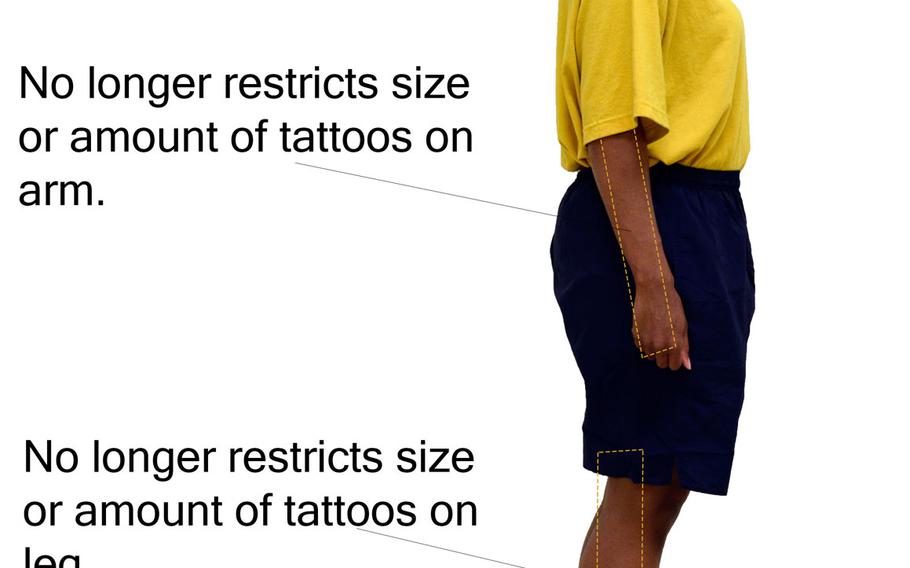 YOKOSUKA NAVAL BASE, Japan — Sailors will be allowed neck tattoos and more tattoos below and elbows and knees, a decision that makes the Navy the most relaxed among the services when it comes to body ink.

The decisions on tattoos and other appearance-related regulations were announced Thursday in Washington in a Navy statement, following feedback from sailors and senior enlisted leaders.

Neck tattoos must not be visible more than an inch in any direction, according to the new policy. Sailors may also now have an unlimited number of tattoos below the elbow and knee.

The regulation also allows recruiters and sailors working within recruiting commands to have sleeve tattoos.

“This policy update is being made in response to the increased popularity of tattoos for those currently serving and in the population from which the Navy draws its recruits,” according to the Navy statement. “It is also meant to ensure the Navy does not miss opportunities to bring in talented young men and women who are willing to serve.”

All services continue to bar racist or sexist tattoos, or any others deemed “prejudicial to good order and discipline.”

The new regulations go into effect April 30, according to a Navy statement.