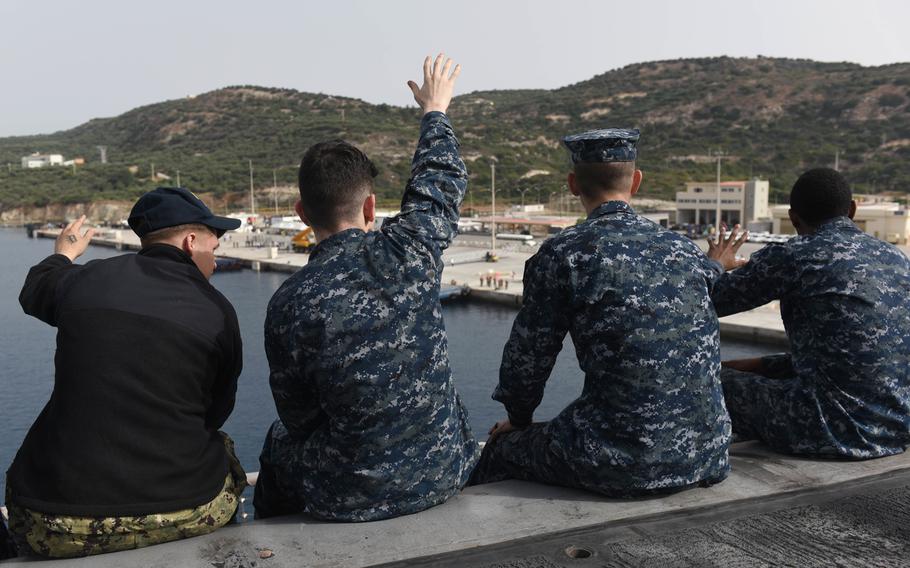 Sailors observe Souda Bay, Crete from the flight deck aboard the Nimitz-class aircraft carrier USS Harry S. Truman on May 23, 2018. The Navy announced Thursday that it will begin requiring enlisted sailors to transfer from shore duty to sea billets where the need is critical. (Thomas Gooley/U.S. Navy photo)

The Navy announced Thursday that it will begin requiring enlisted sailors to transfer from shore duty to sea billets where the need is critical.

Among the factors that will be considered to determine whether a sailor could be tagged for early return to sea are: length of time on shore, paygrade, fleet experience, enlisted classification, previous sea duty, and how much longer a sailor is obligated to serve.

“Sailors must have completed at least 18-23 months of shore duty and will not transfer until they have at least completed 24 months on shore,” the Navy said in the announcement.

“Navy Personnel Command already has a number of programs and policies that provide Sailors an opportunity to volunteer to return to sea duty early,” Capt. Alonza Ross, director of the command’s Enlisted Distribution Division, Career Management Department, said in a statement.

The Navy had previously attempted to address the need to fill critical billets at sea through incentives — some in cash.

Last year, the service announced it was ordering up to 1,100 chief petty officers back to sea ahead of their regular rotation in an attempt to fill almost 3,000 billets.

The impact of the transfers on the sailor’s shore-duty command will be balanced against the priorities at sea, the Navy said.

According to the Navy, sailors in special program billets — such as recruit division commanders, recruiters, brig duty, instructors and special warfare operators — will not be considered for early return to sea. Nuclear-trained sailors will continue to be detailed according to the Naval Nuclear Propulsion Program, the Navy said.

Sailors and their command can challenge a proposed transfer within 15 days of notification by submitting an adverse-impact statement, the Navy said.