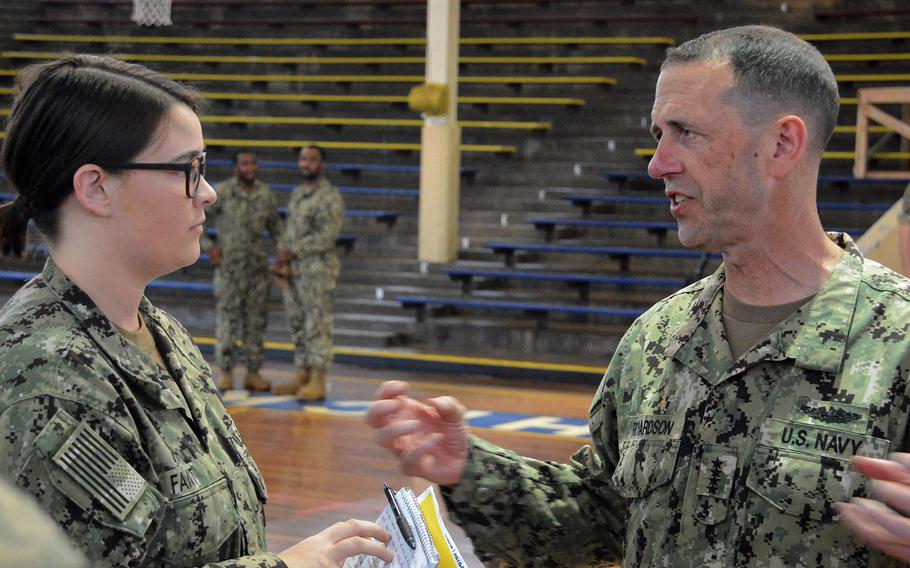 Adm. John Richardson, Navy chief of naval operations, talks with Kaitlyn Fant, a hospitalman, after an all-hands call May 28, 2019, at Joint Base Pearl Harbor-Hickam, Hawaii. (Wyatt Olson/Stars and Stripes)

JOINT BASE PEARL-HARBOR-HICKAM, Hawaii - The Navy will “continue to work” with President Donald Trump regarding his repeated calls to abandon a catapult system being developed for Gerald R. Ford-class carriers, the Navy’s highest-ranking officer said Tuesday. “We’re going to have to continue to work with the president on this,” Chief of Naval Operations Adm. John Richardson told Stars and Stripes after an all-hands call at the joint base. Trump took another opportunity on Memorial Day to disparage the new electromagnetic catapult system used to launch aircraft from a carrier’s deck, new-generation technology designed to replace the steam-operated system that had been used for decades. “We’re spending all that money on electric and nobody knows what it’s going to be like in bad conditions,” Trump told about 1,000 sailors and Marines aboard the USS Wasp, moored at Yokosuka Naval Base, Japan. “So, I think I’m going to put an order — when we build a new aircraft carrier, we’re going to use steam.” Trump has frequently offered the critique, although it remains unclear why this somewhat esoteric technology has become his personal bête noire. “The technology for electromagnetic catapults is proven,” Richardson said. “It went through some, you know – we had to invent it. It’s working on [USS] Gerald R. Ford. We’ve launched a number of aircraft, so we’ll continue to work closely on what’s the best decision for the future.” Richardson also vigorously pushed back on one questioner’s assertion during the all-hands call that the Navy’s newest ships were faulty. “What I’ve noticed is that we have been getting quite a few new ships recently but they’re not functioning nearly as well as they are intended to, so…,” a sailor said before the CNO jumped in with a question of his own. “What ships are those?” Richardson said, to the laughter of the roughly 1,000 sailors assembled at Bloch Arena. Richardson acknowledged the Navy has to “wring out the problems” in the first ships of any new class, citing the USS Gerald R. Ford and some of the early littoral combat ships. The Navy’s full shipbuilding program, however, “is delivering generally quality ships,” he said. “We’re building a lot of destroyers that are working just fine,” he said. “We’re building a lot of submarines that are working just fine.” When those ships have been taken out for sea trials, “you can literally list the problems with them on an index card, which is amazing for something that complex,” he said. Richardson, who is in his fourth year as CNO and is expected to retire after a change of command this summer, has guided the Navy’s first steps toward becoming a fleet of 355 ships. “We’re building a bigger fleet,” he told the sailors. “We started at 272. We’re at 289 right now. At the end of five years we’ll be in the 300s.” The Navy would attain a fleet of 355 ships by 2034 under a projected 30-year shipbuilding plan. Richardson waved off questions by Stars and Stripes about the legacy he leaves as CNO, returning instead to a theme that’s been central to the more than 100 all-hands calls he has led in the past four years. “I’ll tell you that what’s the most important thing for the Navy is our people,” he said. “Nothing works unless we get the people part of our Navy right.” —olson.wyatt@stripes.com Twitter: @WyattWOlson