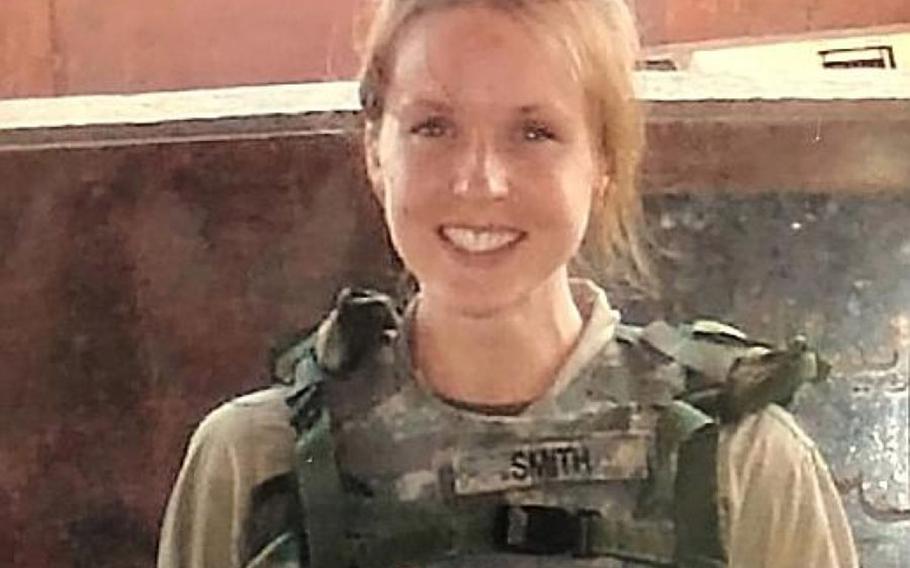 “The Navy approved a request for Kent’s posthumous advancement effective the date of her death,” the service said Friday in a statement.

Kent is slated to be interred at Arlington National Cemetery in Virginia in the coming weeks. The announcement of her promotion was made during a memorial service Friday at the U.S. Naval Academy Chapel in Annapolis, Md., said Army Staff Sgt. Ali Hassoon, a longtime Kent family friend who attended the memorial.

Earlier this week, the Navy said it made several changes to a flawed commissioning and waiver process that led to Kent’s deployment.

Last fall, Kent was slated to attend a clinical psychology doctoral program in lieu of the deployment. But the Navy reversed the move because she previously had cancer, rejected her waiver applications and she received orders to deploy to Syria instead.

“I have reviewed and discussed every aspect of the policies and processes in place during Shannon’s application to become a clinical psychologist,” Adm. William Moran, vice chief of naval operations, wrote in a Feb. 5 letter to the Kent family. “There were many shortcomings in Shannon’s case, mainly in our communications throughout and in fundamental flaws in our waiver and appeal process – I offer no excuses.”

In his letter, Moran explained several changes installed by Navy officials will give highest waiver consideration to deployed sailors, establish a standardized appeal process with an option of seeking a second medical opinion, require peer review of waivers to boost quality assurance and consistency, and require all medical authorities operate on the same software system to ensure continuity.

The changes came less than two weeks after the Kent family requested the move in a Jan. 24 letter to Moran.

Moran said the four new rule changes are now reflected within provisions of Chapter 15 of the Navy’s Manual of Medical Department, which covers physical standards for medical examinations, and lists several health conditions, including cancer, that can disqualify servicemembers from receiving a commission.

Kent’s husband and father to their two toddler sons said the family was satisfied with the moves.

“The Navy has done all they can and moved rather quickly,” Joe Kent, 38, said Wednesday. They “changed as much of the commissioning process and waiver process as they can in their capacity as an individual service.”

Now, a fight remains for the family to change a larger, overarching Defense Department rule that thwarted Kent’s plans to become an officer.

The Department of Defense Instruction 6130.03, the “Medical Standards for Appointment, Enlistment, or Induction into the Military Services,” requires servicemembers meet higher medical standards reserved for joining the service versus the requirements for remaining an active servicemember.

In Kent’s case, that DOD provision ruled her out from the program because of previous thyroid cancer in 2016. Her thyroid was removed and the cancer was cured that year, followed by several scans showing she was clear of the illness, her family said.

Last week, lawmakers from Kent’s home states of New York and Maryland wrote top Pentagon officials demanding they explain how they would update the Defense Department and Navy medical rules and waiver process that led to Kent’s deployment.

Kent, along with 18 others, including another U.S. servicemember, a Defense Intelligence Agency civilian and a Defense Department contractor, were killed the Jan. 16 blast in Syria. Kent was the first female U.S. servicemember killed in Syria since the U.S.-led coalition’s campaign against Islamic State began there in late 2014.

The Pine Plains, N.Y., native enlisted in the military in December 2003 shortly after high school, fueled by the 9/11 attacks and her service-oriented family. She spoke seven languages, including four dialects of Arabic.

Last year, Kent was slated to attend the Navy’s doctorate psychology program at the Uniformed Services University of the Health Sciences, in Bethesda, Md. Kent wanted to attend the psychology program so she could help servicemembers suffering from post-traumatic stress disorder, her husband has said. With that, she could also be closer to her children because there would be less chance that she would deploy into combat zones.

Kent got initial Navy clearance to attend the program in early February 2018, but they reversed plans by the end of the month and she was deployed to Syria in late November.

She was killed doing intelligence legwork as part of larger efforts to track remnants of ISIS, her husband said.

Kent was due to return to the United States by April and hoped to attend Officer Development School in June followed by academic studies as part of her commissioning program in August.