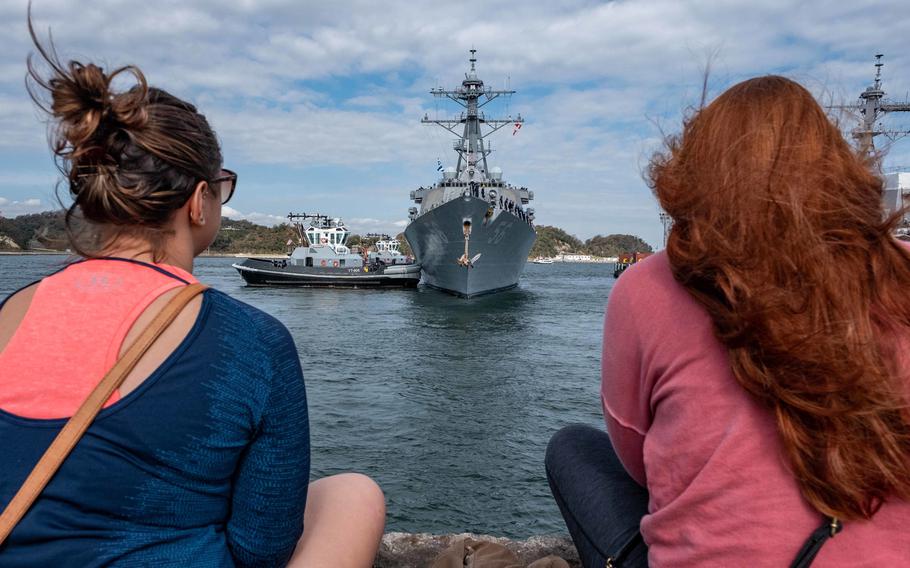 Senior Navy officials told a government watchdog agency it could take 16 years or more to know if recent training reforms will lead to greater ship-driving proficiency across the surface fleet.

That is not, however, an acceptable timeline for assessing success, the Government Accountability Office said in a report released Thursday.

The report recommends the Navy take a series of steps to fully assess in the near term whether changes in training are effective and that as a result ships are being operated more safely at sea.

The Navy has instituted numerous changes for surface warfare officer ship-driving training in the wake of two deadly crashes in 2017.

On June 17, 2017, the USS Fitzgerald, a guided-missile destroyer, rammed into a merchant vessel near the coast of Japan, killing seven sailors and injuring three more.

Two months later, on Aug. 21, another destroyer, the USS John S. McCain, collided with an oil tanker near Singapore. Ten sailors lost their lives in that crash, with five others injured.

The ships — both homeported at Yokosuka Naval Base, Japan — sustained hundreds of millions of dollars in damage.

Earlier in 2017, two Navy cruisers were damaged in separate incidents, one by running aground near Japan, the other by colliding with a fishing vessel in international waters.

The Navy conducted a comprehensive review of its surface fleet as a result of the fatal collisions and began instituting policy changes as early as fall 2017.

The Navy plans to triple the number of ship-driving training hours for surface warfare officers by 2021, the GAO report said.

That plan hinges on the completion of two new simulator-based training facilities, with the first in San Diego slated to be complete in 2021 and the second in Norfolk, Va., to be operational in January 2023, the report said.

During the first three months of 2018, experts from the Navy Surface Warfare Officer School Command conducted ship-driving proficiency “spot checks” of 164 surface warfare officers who had recently qualified as officers of the deck during their first at-sea assignment, the GAO report said.

The experts found “concerns” in ship-driving competency in more than 80 percent of those officers. Another 29 officers found to have “significant competency problems” were likely not qualified to be officers of the deck because “they violated fundamental ship-driving rules, among other issues,” the report said.

The Navy developed standards for conducting spot checks on ship-driving competency, but it plans to end them in 2021, the report said.

Instead, the Navy’s oversight will center on a series of added checks throughout the careers of surface warfare officers to ensure they maintain their skills.

“Senior Navy officials stated that it could take 16 years or more to know if the planned changes to [surface warfare officers] training were effective in increasing Commanding Officer ship-driving proficiency across the fleet and stated that they intend to closely monitor the implementation of changes to the training,” the report said.

“These checks are steps in the right direction but may not provide adequate assessment mechanisms in the near term and might lead to missed opportunities going forward,” the report said. “For example, the Navy is expanding its ship-driving training but is not planning to collect fleet-wide feedback on classroom, simulator, and at-sea training received.”

The GAO found the Navy had not provided commanding officers with standard criteria for qualifying those officers to drive ships.

“Navy officials emphasized the importance of allowing ship Commanding Officers to make their own determination of an officer’s preparedness to drive a ship, due to their knowledge of the ship’s operating conditions,” the report said.

The Navy had also not developed a plan for analyzing and using information chronicled by officers in the Surface Warfare Mariner Skills Logbook, the report said. The Navy in September 2018 began requiring officers to enter, in longhand, their ship-driving and related experiences in these logbooks.

“Navy officials stated that over time, as they gather these data, they intend to examine the link between ship-driving proficiency and [surface warfare officers] experience,” the report said. “However, officials did not have any specific, measurable plans to analyze and use these data or to assess the completeness of these data.”

The Navy concurred with the recommendations, the report said.