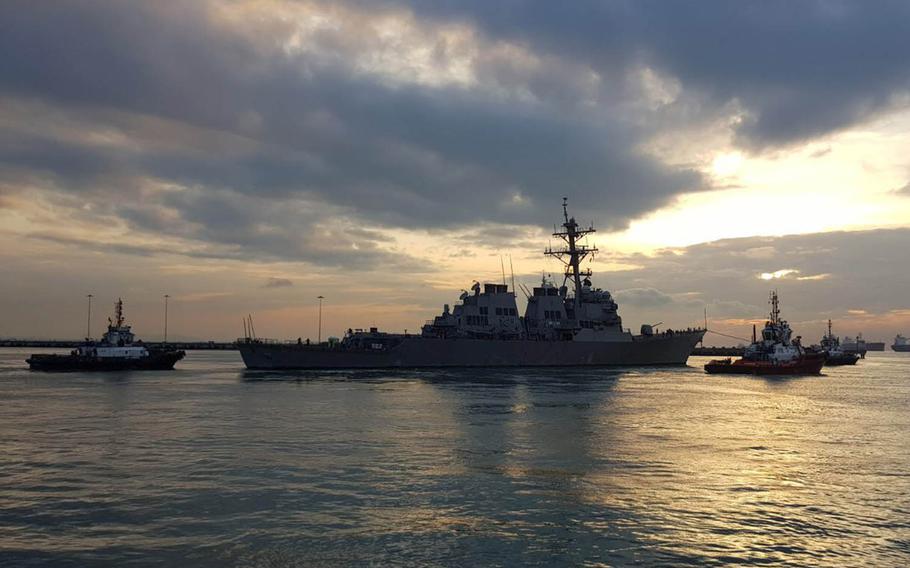 The USS John S. McCain is towed away from the pier at Changi Naval Base, Singapore, to meet the heavy-lift transport vessel MV Treasure, Thursday, Oct. 5, 2017. (Micah Blechner/U.S. Navy photo)

The USS John S. McCain is towed away from the pier at Changi Naval Base, Singapore, to meet the heavy-lift transport vessel MV Treasure, Thursday, Oct. 5, 2017. (Micah Blechner/U.S. Navy photo) 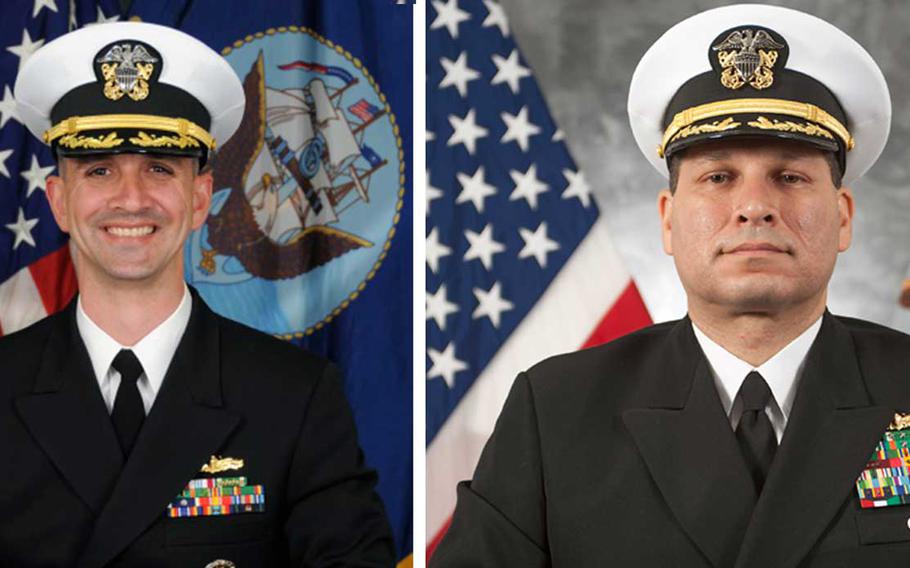 The USS John S. McCain’s commanding officer, Cmdr. Alfredo J. Sanchez, left, and executive officer, Cmdr. Jessie L. Sanchez were relieved of duty due to a loss of confidence in their ability to lead, according to a Navy statement. (U.S. Navy photo)

YOKOSUKA NAVAL BASE, Japan — The Navy has relieved two USS John S. McCain senior officers in connection with a “preventable” deadly collision involving the destroyer and a civilian merchant vessel near Singapore.

Alfredo Sanchez assumed duties as the McCain’s executive officer in April 2015 and became the ship’s commander in September 2016. He has been reassigned to Naval Forces Japan, while Jessie Sanchez will go to work for Yokosuka’s Ship Repair Facility, the statement said.

The Navy’s Pacific leadership has been shaken up since a string of accidents in the region resulted in several leaders being removed from their positions. In January, the USS Antietam ran aground and spilled roughly 1,100 gallons of hydraulic fluid into Tokyo Bay.

In May, the USS Lake Champlain collided with a South Korean fishing boat while operating off the east coast of the divided peninsula. In June, a collision between the USS Fitzgerald and a Philippine-flagged merchant ship killed seven sailors.

The commanding officers of the Antietam and Fitzgerald were relieved of their duties. The commanders of 7th Fleet, Task Force 70 and Destroyer Squadron 15 were also relieved after the collisions.

Last month, Pacific Fleet Commander Adm. Scott Swift announced he would retire after learning he would not be tapped to lead U.S. Pacific Command.