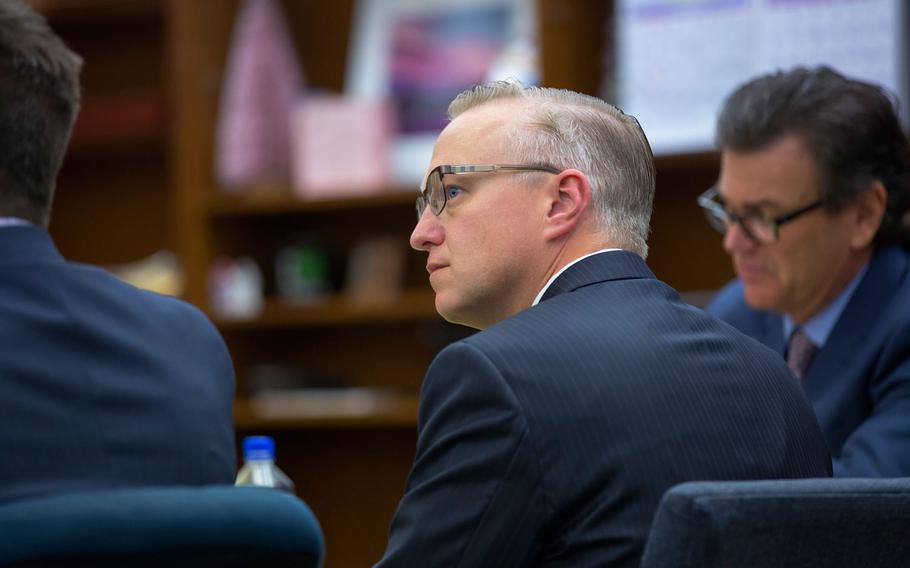 A Navy commander who faced a rape charge stemming from a drunken night in 2016 that led to three civilian criminal trials and a court-martial has accepted a plea deal to lesser charges that will keep him in the brig for a year.

Neuhart, 42, pleaded guilty to charges of assault and behavior unbecoming of an officer on Aug. 26 before a Navy judge in San Diego, said Brian O’Rourke, spokesman for Navy Region Southwest.

Neuhart pleaded not guilty to other charges against him, including rape, breaking into a home, indecent visual recording and fleeing apprehension, according to a charge sheet originally filed in January.

He was sentenced to one year confinement at Naval Consolidated Brig Miramar in San Diego, a forfeiture of $1,000 in pay each month for six months and a letter of reprimand, O’Rourke said.

As part of the deal, Neuhart’s pay will not be reduced so long as he continues to meet his required allotment of family support payments. However, Neuhart could still face dismissal from the Navy. His fate in the service will be determined by a board of inquiry, O’Rourke said.

This is the end of a legal battle that began following a 2016 incident in which a junior officer who served with Neuhart on Guam accused him of trying to rape her in her home in the Valencia Park neighborhood of San Diego, the San Diego Union-Tribune reported in 2018. The junior officer in the case was not named.

The first two criminal cases against Neuhart ended in a mistrial — and, while preparing for the third trial, the San Diego District Attorney’s office dropped the charges against Neuhart in June 2018, the Union-Tribune reported. The Navy then optioned to court-martial him.

Neuhart was removed from his command of the helicopter squadron on Guam and was put on administrative duties in San Diego during the trials.

Evidence presented in the civilian trials included security camera footage from a downtown San Diego hotel showing Neuhart and the junior officer drinking together and occasionally hugging and kissing while the commander was in town for a conference, the Union-Tribune reported.

The two took a paid ride to the junior officer’s house, and later she asked him to leave, the paper reported. Neuhart then set his cellphone toward the back door of the house to record himself knocking and telling her to let him in the house. In testimony, Neuhart said he did this to protect himself from a rape allegation, the paper reported. A neighbor called the police and as Neuhart ran from the house, he fell, broke his leg and was arrested.

Neuhart commissioned in August 2000 through the ROTC program at Ohio State University and has flown SH-60F Seahawk, HH-60H Pave Hawk and MH-60S Seahawk helicopters, according to his official Navy biography.