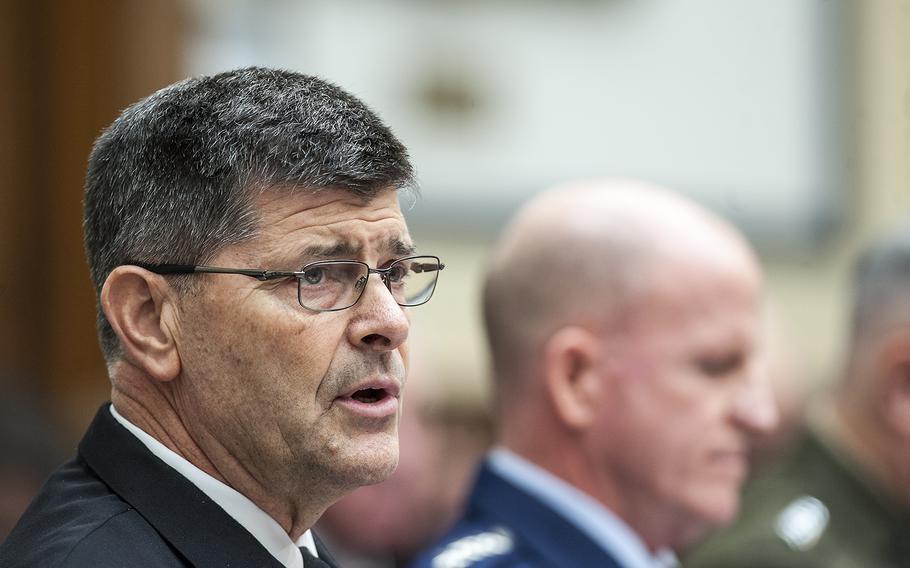 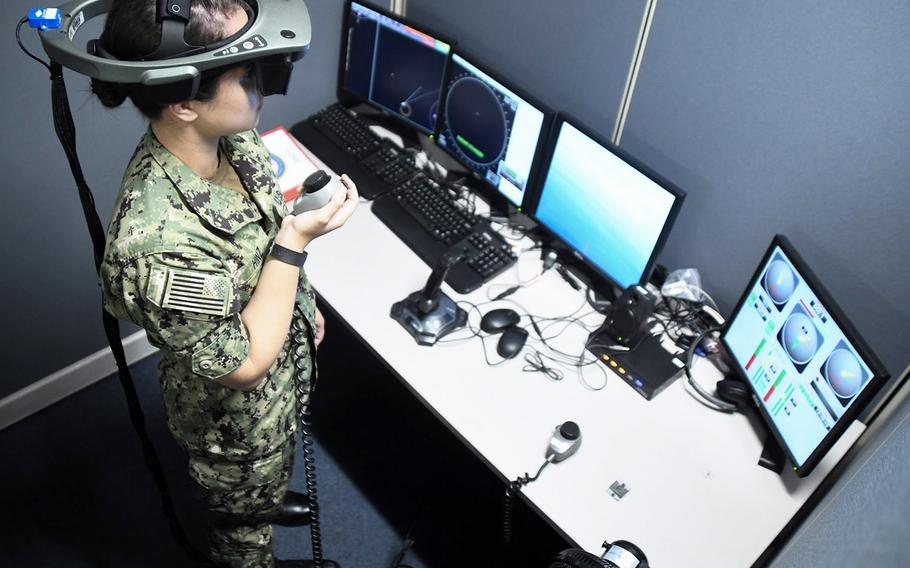 In a July, 2018 file photo, a Basic Division Officer Course student at Surface Warfare Officers School, Det. San Diego, practices navigation in the Conning Officer Virtual Environment (COVE) shiphandling simulator, which provides state-of-the-art navigation and shiphandling training and can emulate the Navy's homeports and almost every routine port of call around the world. Constructing better training simulators for sailors on surface ships is one of the initiatives being undertaken by the Navy. (Sam Hardgrove/U.S. Navy)

WASHINGTON — Constructing better training simulators for sailors on surface ships is one of the initiatives being undertaken by the Navy as it implements recommendations made after the deadly USS John S. McCain and USS Fitzgerald collisions, Adm. William Moran, the vice chief of naval operations, said Tuesday.

Moran discussed the Navy’s efforts as a result of the 2017 collisions during a maritime security discussion at the Center for Strategic and International Studies, a think tank in Washington, D.C.

Moran, who leads the Navy’s Readiness Reform Oversight Committee that oversees the implementation of 111 recommendations that came out of two reports after the McCain and Fitzgerald collisions, was nominated last week to be the next chief of naval operations, the Navy’s most senior officer.

During the discussion, Moran said he was encouraged by the progress of the implementation, and that part of the progress included building better training simulators in the Navy. He was “very disappointed” in the simulators that he saw used by the surface force compared to what he was used to as a naval aviator.

The aviation simulators that he used could train pilots under stressful conditions without risking an aircraft, but they did not exist for surface forces in areas where it was needed, Moran said. The Navy has looked at ways to modify and modernize some of the simulators.

One of the lessons learned from the 2017 collisions was poor communications and teamwork between the ship’s bridge and the combat information center, Moran said.

“So we bolted on [combat information center] simulation to the existing bridge simulators that are in the fleet, and that is helping the instructors teach basic communications but also some skills that are important that we reinforce,” he said. “Unfortunately though, we don’t have the capacity I think the fleet needs to do this as much as I think [commanding officers] would like to do it.”

The Navy’s training simulators for ships such as the littoral combat ships are “the best in the business,” Moran said. He wants that type of realistic simulator for every ship class or at least be able to reconfigure one to train a sailor for any ship that they might work aboard.

The Navy is constructing new buildings in San Diego, Calif., and Norfolk, Va., with multiple simulators that will allow sailors to undergo more training.

“That to me will make the biggest difference over time in terms of proficiency, experience, and the kinds of things that we need,” he said.

The simulators are not meant to replace experience aboard a ship at sea but to complement it, Moran said.

He said he hopes one day to see training simulators aboard ships in shipping containers with capabilities like the “holodeck” in the Star Trek: The Next Generation television series.

“That’s probably a vision a little too far but, I tell you, the way things are moving, I’m not so sure,” Moran said.