Naval Academy alumnus nominated to be its next superintendent 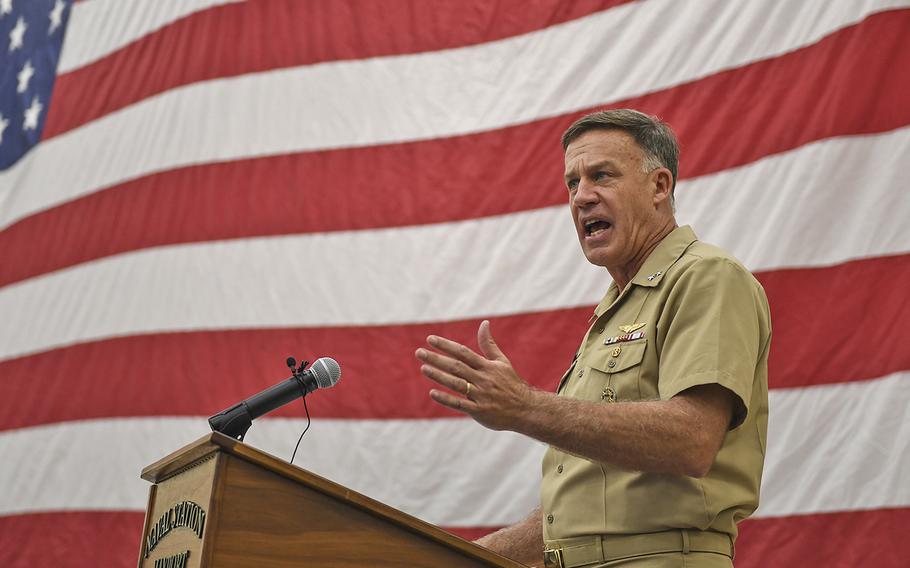 Rear Adm. Sean Buck speaks during a chief petty officer pinning ceremony at the Naval Station Mayport, Fla., on Sept. 22, 2017. Buck been nominated to be the next superintendent of the U.S. Naval Academy. (Timothy Schumaker/U.S. Navy)

WASHINGTON — Rear Adm. Sean S. Buck has been nominated to be the next superintendent of the U.S. Naval Academy in Annapolis, Md.

Navy Secretary Richard Spencer and Adm. John Richardson, the chief of naval operations and a 1982 graduate of the Naval Academy, nominated Buck on Tuesday, according to the academy. Buck would also be appointed to the rank of vice admiral if he is confirmed by the Senate.

If confirmed, Buck, 58, would be the 63rd superintendent of the Naval Academy, replacing Vice Adm. Walter “Ted” Carter, who is retiring in the summer. The change of command is planned for the summer, but the date has not been selected as they wait for the Senate confirmation, according to the academy.

Originally from Indianapolis, Ind., Buck is a 1983 graduate of the Naval Academy, which is the service’s only undergraduate institution for naval and Marine officers. In his career as a naval flight officer, Buck has flown the P-3C Orion, an anti-submarine warfare patrol aircraft, and served aboard the aircraft carrier USS Theodore Roosevelt, according to his Navy biography. He has also commanded the Patrol and Reconnaissance Wing 11, located at Naval Air Station Jacksonville in Florida, and served as the chief of staff for the plans and policy director for the Joint Staff, according to the announcement.

His has a master’s degree in international security policy from George Washington University in Washington, D.C. Buck’s other education includes the College of Command and Staff at the U.S. Naval War College in Newport, R.I., the Armed Forces Staff College in Norfolk, Va., and the Seminar XXI program at a branch of the Massachusetts Institute of Technology in Washington, D.C.

Buck’s military awards include the Defense Superior Service Medal and the Legion of Merit.