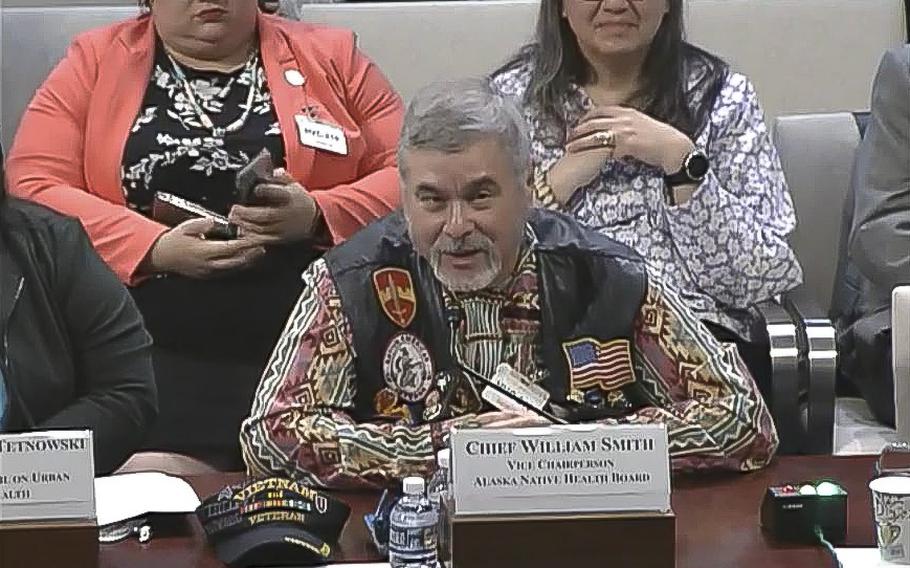 A video screen grab shows Chief William Smith, with the Alaska Native Health Board, testifying at a hearing on Capitol Hill on Oct. 30, 2019. (House Committee on Veterans' Affairs/YouTube)

WASHINGTON — Native American leaders traveled from across the country this week to share their concerns with lawmakers about veterans’ barriers to health care – the first forum of its kind they’ve been granted in three decades.

The Subcommittee on Health, a component of the House Committee on Veterans’ Affairs, heard Wednesday from multiple organizations representing Native American veterans. They gained feedback on a host of issues, from the Department of Veterans Affairs’ failure to track suicide data on Native American veterans, to a lack of cultural competency at the VA and a discrepancy in funding between the VA and Indian Health Services.

“Today is a historic day in Washington, D.C., as it is the first time in at least 30 years that either chamber’s veterans’ affairs committee has held a hearing solely on the health care needs of our Native veterans,” said Rep. Julia Brownley, D-Calif., the subcommittee chairwoman.

Before the 9/11 terrorist attacks, American Indians served in the military at a higher rate than any other ethnic group, according to VA data.

The groups said Wednesday that the population of 146,000 Native American veterans experience among the lowest health outcomes and largest barriers to health care. They also cited high rates of homelessness, poverty and mental and behavioral health compared to other ethnicities.

Their concerns were many, and wide-ranging.

Some of the problems put the focus on a Memorandum of Understanding between the VA and Indian Health Services, an agency within the Health and Human Services Department that provides health care to tribal members. The memorandum was last negotiated in 2010, and the agencies are expected to renegotiate and revise it by mid-2020.

All of the organizations present Wednesday asked for a seat at the table in the negotiation process. They also brought up an overly burdensome referral process, which requires Native veterans to be referred to a private-sector provider through Indian Health Services and the VA in order to be reimbursed.

Chief William Smith, with the Alaska Native Health Board, called on lawmakers to end a discrepancy in funding between the VA and Indian Health Services, where many Native American veterans receive care. According to the board’s written testimony, the VA’s spending per patient was double that of IHS.

“When Native veterans are treated in HIS … that means they that they are accessing a system that is funded at half the rate of direct care VA facilities,” Smith wrote. “This causes instability in care.”

Some veterans are charged copayments when they’re treated at VA facilities, and Native American veterans are not exempt. The organizations argued the cost goes against the trust and treaty obligations of the United States to provide health care to Native Americans, and they want the copayments renegotiated in the new Memorandum of Understanding.

In 2017, about 30 percent of Native veterans were charged copays, averaging about $282 per veteran, said Kevin Allis, CEO of the National Congress of American Indians, the largest indigenous rights organization in the country.

“This represents a significant barrier to care,” Allis said.

Allis also urged the VA to track rates of veteran suicides in the Native American population. While the VA tracks suicides by ethnicity, American Indian and Alaskan Native veterans are placed into the category of “other,” Allis explained

The National Congress of American Indians also wants the VA to streamline the process for tribes to be designated through the VA as tribal veterans service organizations, which would allow tribal representatives to log into VA systems to file and track benefits claims. Though the process has been in place since 2017, only three tribe-affiliated groups have applied for the status, and none have been accepted.

Representatives from the VA and Indian Health Services were present Wednesday to hear the groups’ concerns, but lawmakers and the Native American organizations were unhappy that the hearing didn’t get the attention of the VA’s top leaders, VA Secretary Robert Wilkie and Undersecretary for Health Richard Stone.

Wilkie and Stone declined invitations to testify. Allis, Victoria Kitcheyan, chair of the National Indian Health Board,and Maureen Rosette, board president of the National Council of Urban Indian Health, wrote a letter the night before the hearing, urging Wilkie to attend.

“We write to strongly urge you to reconsider your decision not to testify,” they wrote. “It presents an ideal and unique opportunity for you to highlight the work of the VA to better meet the health needs of Native veterans.”

VA Press Secretary Christina Mandreucci said Tuesday that Cabinet secretaries don’t typically testify at subcommittee hearings. Instead, the VA sent its deputy undersecretary for health for community care, its executive director of the VA Office of Rural Health and its director of tribal relations.

Kameron Matthews, Deputy Undersecretary for Health for Community Care, pledged to streamline the referral process for Native veterans into the private sector and look into the issue of copays for that population.