Buy Photo
The National Veterans Memorial and Museum opened Saturday in Columbus, Ohio. The museum, designated by Congress as a "national" site, aims to connect veterans and share their experiences with those who didn't serve. (Nikki Wentling/Stars and Stripes)

Buy Photo
The National Veterans Memorial and Museum opened Saturday in Columbus, Ohio. The museum, designated by Congress as a "national" site, aims to connect veterans and share their experiences with those who didn't serve. (Nikki Wentling/Stars and Stripes) 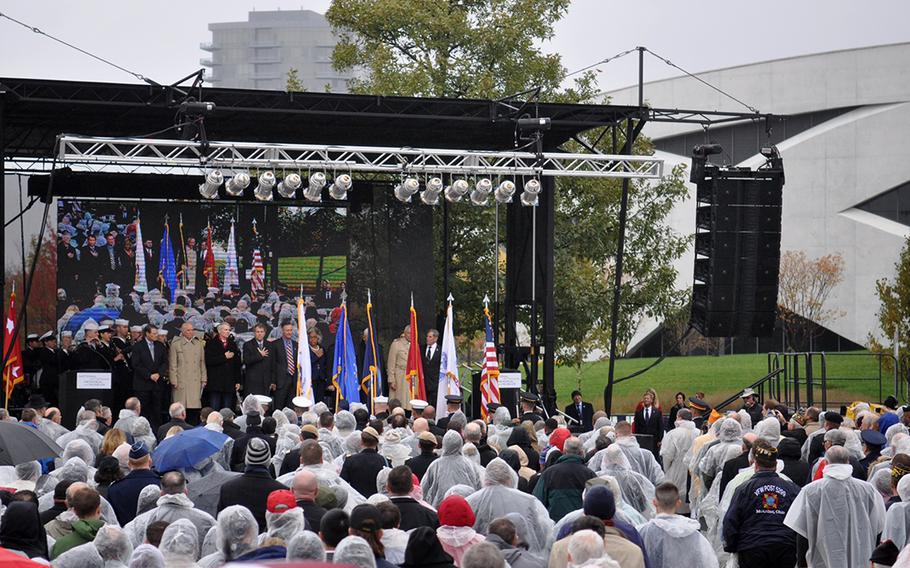 Buy Photo
Hundreds of people attended a grand opening ceremony in Columbus, Ohio, on Saturday for the National Veterans Memorial and Museum. U.S. senators and representatives from Ohio, as well as Department of Veterans Affairs Secretary Robert Wilkie and retired Gen. Colin Powell spoke at the event. (Nikki Wentling/Stars and Stripes) 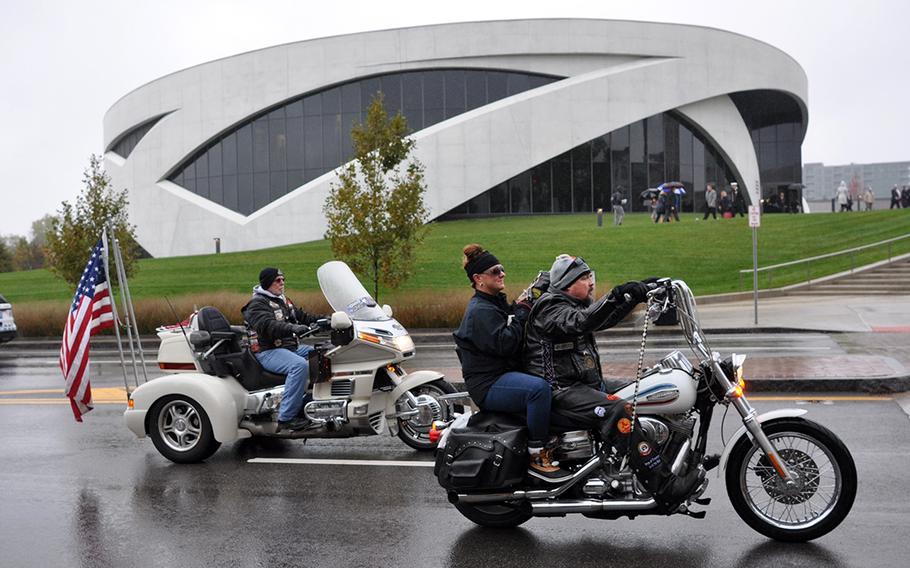 Buy Photo
Patriot Guard riders drive by the new National Veterans Memorial and Museum on Saturday as part of a grand opening ceremony. Hundreds of people attended the event, despite rain. (Nikki Wentling/Stars and Stripes) Buy Photo
A veteran takes a photo Saturday of the new National Veterans Memorial and Museum in Columbus, Ohio. Following a ceremony on Saturday, the museum was made open to the public. (Nikki Wentling/Stars and Stripes) Rep. Joyce Beatty, a Democrat representing Ohio in the U.S. House, holds up her scissors in celebration during the grand opening of the National Veterans Memorial and Museum in Columbus on Saturday, Oct. 27. Beatty, along with the rest of Ohio’s congressional delegation, lobbied Congress to designate the facility a “national” site. (NIKKI WENTLING/STARS AND STRIPES)

"This museum pays tribute to all our veterans of all generations – all of us who are willing to make the sacrifice our Founding Fathers made in 1776," said Powell, former chairman of the Joint Chiefs of Staff. "They gave us a responsibility to protect this beloved country of ours and make it an inspiration to the rest of the world, to make sure we are a democracy and looked upon all around the world as a place of hope.”

The goal of the museum – located in downtown Columbus and designated by Congress as a “national” site – is to tell veterans’ individual stories, as well as focus on their shared experiences throughout history.

The Columbus Downtown Development Corporation led the project, which took six years and $82 million to complete. It was the idea of astronaut John Glenn, a World War II veteran and former U.S. senator from Ohio. Glenn’s son, David, spoke at the grand opening.

“For my father, nothing in his life was more formative and significant that his military service,” said David Glenn of his father who died last year. "So helping with the creation of this National Veterans Memorial and Museum was very important to him. I wish he was here to see it.”

A few hundred people, mostly veterans and their families, attended the ceremony Saturday, many of them draped in ponchos and holding umbrellas to keep off the persistent mist and rain.

Jaspen Boothe, an Army veteran who left the military this year, traveled from Alexandria, Va., for the ceremony. She’s featured in the museum, appearing in some of the videos playing in its center concourse.

“My 8-year-old will be able to walk through it, and there aren’t so many kids who can say, ‘My mom is in a museum,’” Boothe said. “I think it’s just a great depiction of how times are changing. We’re getting to the point women can be recognized as equal to our male counterparts.”

Behind the ceremony stage sat the museum, a spiral structure made of three concrete arches.

Glenn wanted the architecture to be distinctive, so visitors would know it was a “special and sacred place,” Taylor said. Architectural Digest called it one of the most anticipated buildings of the year.

The facility includes a 53,000-square-foot museum, along with a 2.5-acre memorial grove. As the building spirals up, an outdoor gathering space is located at the top.

But speakers Saturday focused on the content of the museum, rather than its design. Inside, photos of veterans -- in their service uniforms and civilian clothes -- hang from the ceiling, and videos of veterans sharing their stories play as part of various exhibits.

“We owe our warriors a debt we can never repay, but we can remember them and what they did and why they chose to be brave for us,” Wilkie told the crowd. “That is the promise of this place, to never forsake those who served.”

Powell was one of a few speakers to mention the deadly shooting at a Pittsburgh synagogue earlier Saturday. He said, with the “trials and tribulations” in the United States, the museum could serve as a unifier.

“Let us all come together again,” he added.