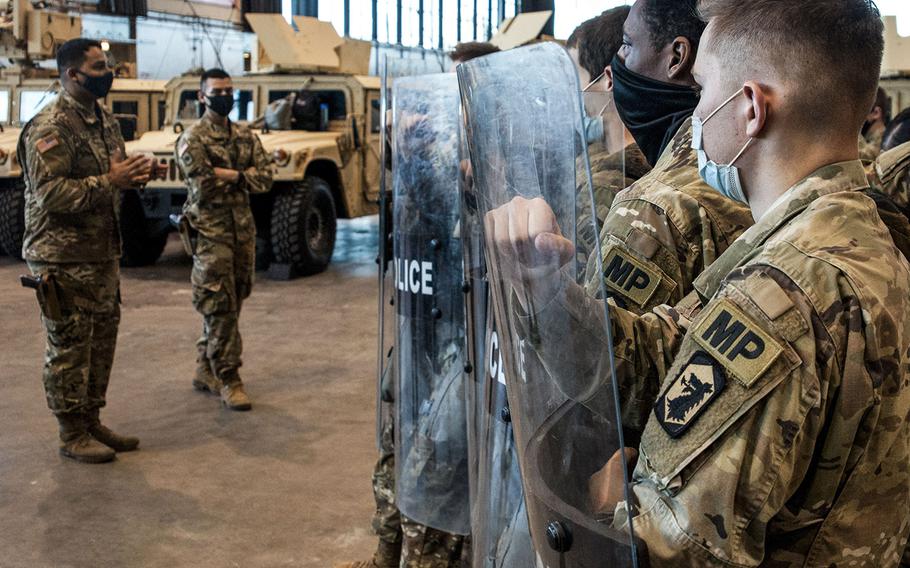 In a Nov. 2, 2020 photo, military police with the Illinois National Guard stage within the McCormick Place as part of Operation Civil Disturbance Response III. Nearly 400 soldiers and airmen were activated to stand ready to support civil authorities in the event of widespread unrest. (Ian "LeAnne" Withrow/National Gurad)

AUSTIN, Texas – National Guard troops put on standby in several states across the country to respond to possible protests following the results of the presidential election stood down over the weekend.

Illinois, Florida and Massachusetts relieved troops by Monday without the Guards receiving missions. Florida did not specify how many troops were activated, though Illinois placed nearly 400 troops on standby and Massachusetts readied 1,000, according to officials from each state.

Oregon was the only state to report needing the additional Guard support when a group of protesters in Portland incited violence and damaged property last week. Gov. Kate Brown sent in about 50 troops, but all of them left the city by the following day.

“Free and fair elections and a peaceful transition of power are hallmarks of our democracy," Brown said in a statement. "I would like to thank Oregonians for expressing their free speech rights largely through joyful celebrations yesterday. I'd also like to thank the city, county, and state law enforcement officers, as well as the Oregon National Guard volunteers, who worked over the past several days and nights to keep the peace and protect free speech in Portland."

Many state officials throughout the country confirmed during the past two weeks their plans to use National Guard troops to help at polling places on Election Day or quell protests in the aftermath of voting.

Concerns stemmed from a summer of civil unrest across the United States, marked by large demonstrations in many cities where protesters railed against racial injustice and called for political reform after a Black man died while detained by Minneapolis police. In some cases, the protests turned violent.

As President Donald Trump made unfounded claims of voter fraud related to the large number of mail-in ballots, some cities saw his supporters crowd together outside of ballot-counting sites in states such as Arizona and Michigan.

Once the election results were called Saturday in favor of President-elect Joe Biden, celebratory crowds formed on the streets in several cities across the country. Despite supporters for Trump and Biden demonstrating near each other, gatherings remained peaceful.

“We are pleased to say that we were not needed for any missions,” said Lt. Col. Brad Leighton, spokesman for the Illinois National Guard. “Our troops took advantage of the time with the Illinois State Police to train on riot control. However, we are grateful that there was no rioting or looting in Illinois — only people peacefully exercising their First Amendment rights.”