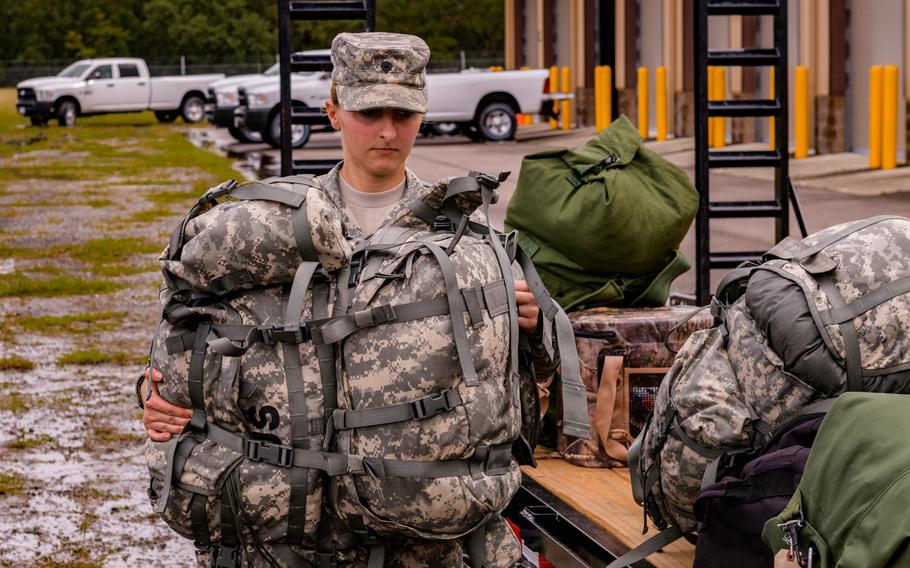 WASHINGTON — Thousands of National Guard troops in Florida and Georgia as well as pararescue teams, high-water vehicles, transport planes and helicopters, and Coast Guard cutters have been positioned Wednesday to help respond to Hurricane Michael as the category 3 storm barrels through the southeastern portion of the United States, an Air Force general said Wednesday afternoon.

The Department of Defense is “surrounding the storm with military capability that we can surge forward in support of the [Federal Emergency Management Agency], state, and local officials,” Gen. Terrence O'Shaughnessy, commander of North American Aerospace Defense Command and U.S. Northern Command, told reporters at the Pentagon. “The region that is being affected by Michael has 10 major military bases and installations and is home to more than 700,000 military members and their families.”

Hurricane Michael made landfall near Mexico Beach, Fla., on Wednesday afternoon as a category 4 hurricane with sustained winds of 155 mph winds.

The storm is projected to continue north through North and South Carolinas, which are still recovering from Hurricane Florence’s damage to the region in early September.

O'Shaughnessy said the Defense Department is focused on early response search and rescue, and the areas that will be impacted from the storm surge spans from Pensacola to Tampa in Florida.

Military personnel and equipment are positioned at several locations around the storm, including:

At Patrick Air Force Base, located between Satellite Beach and Cocoa Beach in Florida, there are two pararescue teams supported by aircraft capable of mid-air refueling. 35 rotary-wing aircraft and 80 high-water vehicles at Fort Stewart and Hunter Army Airfield near Savannah, Georgia, for immediate requests for search and rescue assistance. There are commercial utility vehicles and teams stationed at the Marine Corps Logistics Base in Albany, Georgia. There are also added critical supplies, commodities and high-water vehicles at Maxwell Air Force Base in Alabama, North Auxiliary Airfield in South Carolina, and Fort Bragg, North Carolina. In Gulfport, Mississippi, additional pararescue personnel supported by aircraft capable of mid-air refueling and swift water rescue boats to provide immediate life-saving support, and 15 National Guard helicopters are coming in from other states to support Florida.Additionally, O'Shaughnessy said the Army Corps of Engineers had 80 personnel deployed to the affected area already with 55 generators and 30 more on the way. The Defense Logistics Agency has prepositioned fuel supplies at Maxwell Air Force Base and other areas, along with 145 additional generators. The military had C-17 transport aircraft on alert to respond as well as aeromedical evacuation teams on standby.

“Our Army Corps of Engineers is looking at this storm and seeing how is this storm going to impact those very same river basins that a month ago, a few weeks ago, we were very concerned about. They’re still a concern for us,” O'Shaughnessy said.

FEMA sent 3,000 personnel to Florida before Hurricane Michael made landfall, according to an agency news release Wednesday. Search and rescue teams have also been positioned across the state to assist with local rescue efforts.

The Coast Guard has multiple assets around the region to assist with rescue efforts, including fixed- and rotary-wing aircraft, eight shallow-water rescue teams in Alabama with 10 additional teams on standby, according to FEMA. The Coast Guard also has 16 cutters positioned to provide assistance.

Georgia Gov. Nathan Deal also expanded his state of emergency Wednesday to include 108 counties. He has activated 1,500 Georgia National Guard members to be ready.