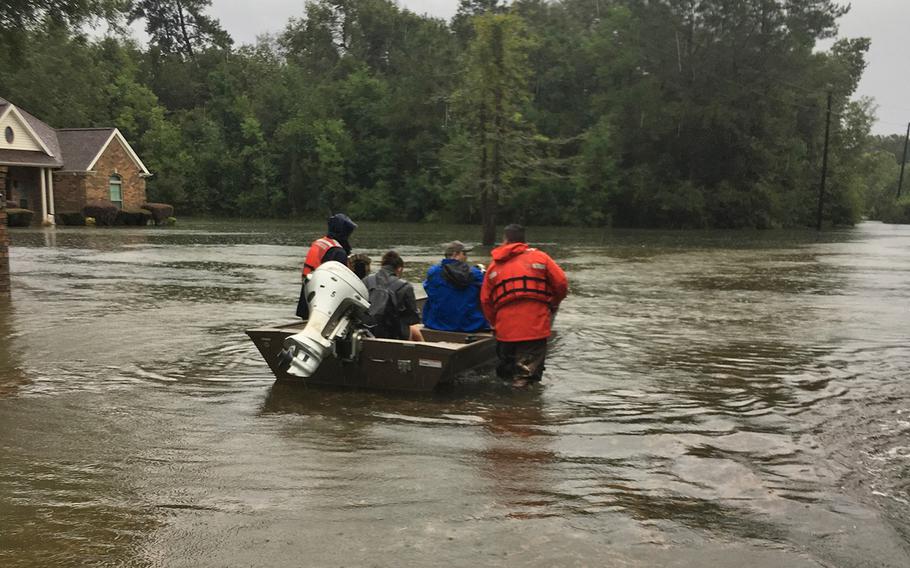 AUSTIN, Texas — Three ground platoons from the Texas National Guard are setting up operations and readying high-water rescue vehicles in southeast Texas after Tropical Storm Imelda has dropped more than 40 inches of rain for three days in some areas, according to state officials.

Texas cities from the Houston area east to Louisiana are flooding from the near continuous rainfall. Aside from the rescue vehicles, the National Guard also has UH-60 Black Hawk helicopter crews on standby, said Brandon Jones, spokesman for the Texas Military Department.

“Our guard [members] conduct regular and routine training exercises to prepare for situations like Tropical [Storm] Imelda,” he said in a statement.

The ground platoons will set up operations in the Beaumont-Port Arthur area, where some rain gauges have reported more than 40 inches of rain, said Robert Megnia, meteorologist with the National Weather Service in Lake Charles, La. Western parts of Jefferson County saw the heaviest totals, while Port Arthur saw about 12 inches of rain during the last three days.

For many people in the region, Imelda is bringing back memories of Hurricane Harvey, a storm that dumped similar rain totals in the area about two years ago. Recovery from that storm remains ongoing for many residents as a $1.7 billion relief package for Harvey aid was signed into law just three months ago.

“This is a very rare event and people are comparing it to Harvey. I think that’s pretty fair,” Megnia said.

As of 1 p.m. Thursday, the Beaumont Police Department had received more than 760 weather-related calls for service, according to a statement on the department’s Facebook page.

“Please understand that the high-water rescues that are ongoing are prioritized by immediate threat to life safety and medical emergencies,” according to the statement. “There have been hundreds of requests for evacuations, however those evacuations may take several hours. City coordinated resources will pick you up and bring you to a safe designated location. Life safety is our number one priority. Please try to remain calm and be strong as we work diligently to get to each and every person who has called us for help.”