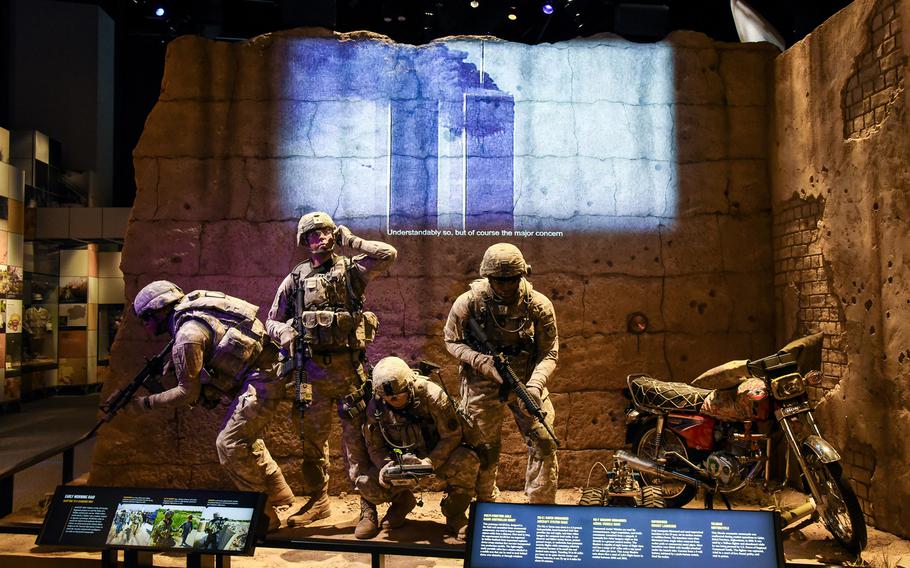 Buy Photo
Cast figures depict American soldiers operating in Afghanistan as a video in the background shows news footage of the Sept. 11, 2001 terrorist attacks on the World Trade Center in New York, inside the new National Museum of the United States Army's Changing World Gallery. The gallery shares the Army's story from 1990 until today and feature artifacts from Afghanistan and Iraq. (Corey Dickstein/Stars and Stripes)

Buy Photo
Cast figures depict American soldiers operating in Afghanistan as a video in the background shows news footage of the Sept. 11, 2001 terrorist attacks on the World Trade Center in New York, inside the new National Museum of the United States Army's Changing World Gallery. The gallery shares the Army's story from 1990 until today and feature artifacts from Afghanistan and Iraq. (Corey Dickstein/Stars and Stripes) 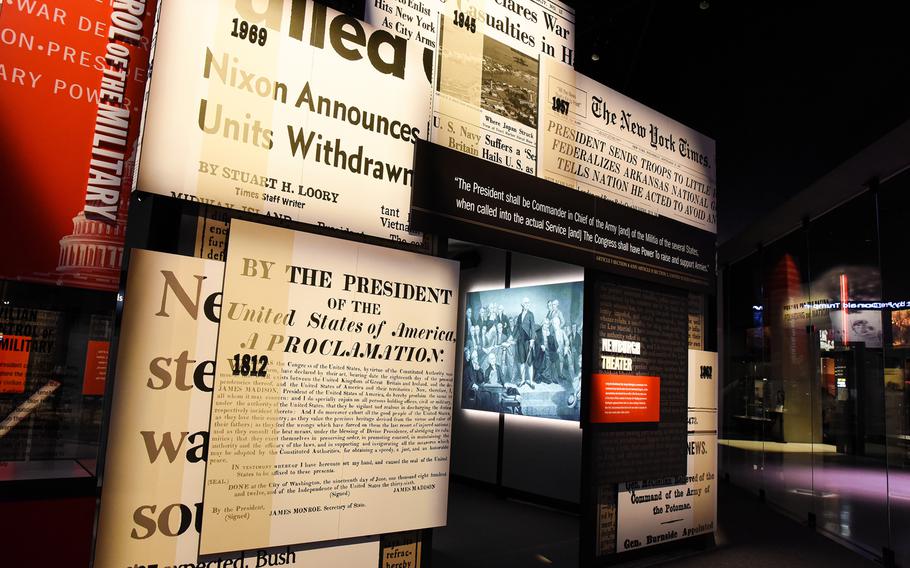 Buy Photo
A small theater shows a video explaining the Newburgh Conspiracy and how George Washington's address to soldiers on the verge of mutiny in 1783 in Newburgh, N.Y. quelled a potential uprising against the republic from within its military. The theater is in the National Museum of the United States Army's Army and Society Gallery that documents the relationship between the service and American culture. (Corey Dickstein/Stars and Stripes) Buy Photo
Pylons details information about soldier who fought in Vietnam, inside the Cold War Gallery at the new National Museum of the United States Army at Fort Belvoir, Va. (Corey Dickstein/Stars and Stripes) 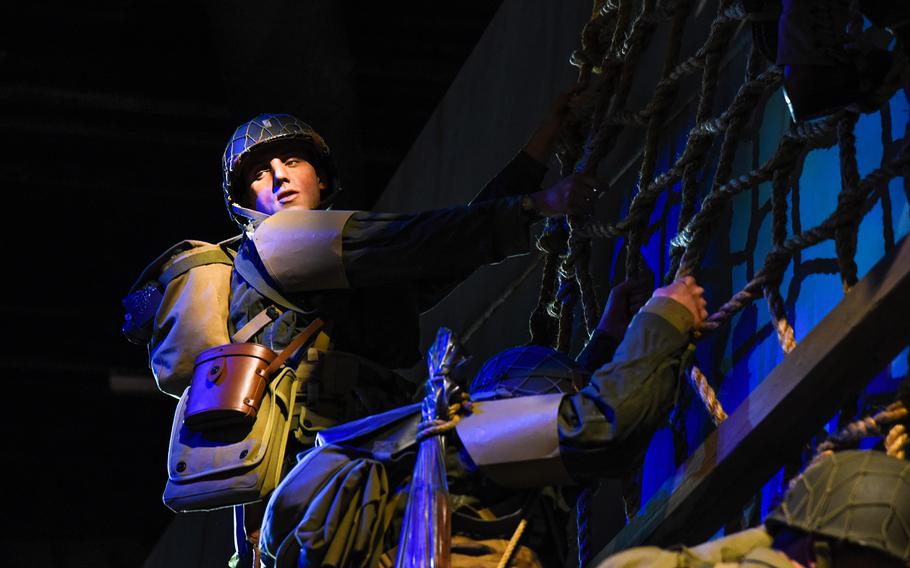 Buy Photo
The National Museum of the United States Army includes some 70 cast figures of soldiers in action, including this one of a soldier lowering himself into a Higgins Boat used in the Normandy Beach landings during World War II. The casts were created from scans of current active-duty soldiers. (Corey Dickstein/Stars and Stripes) 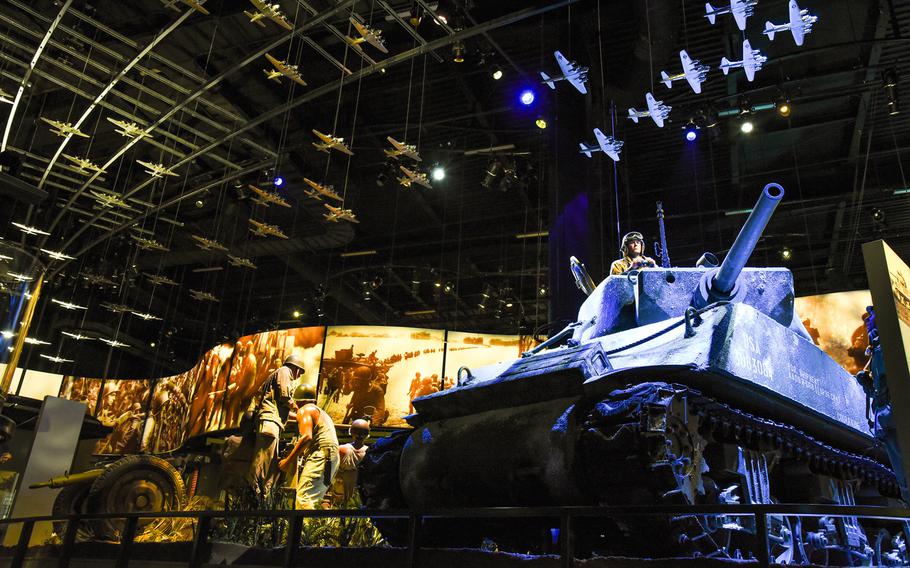 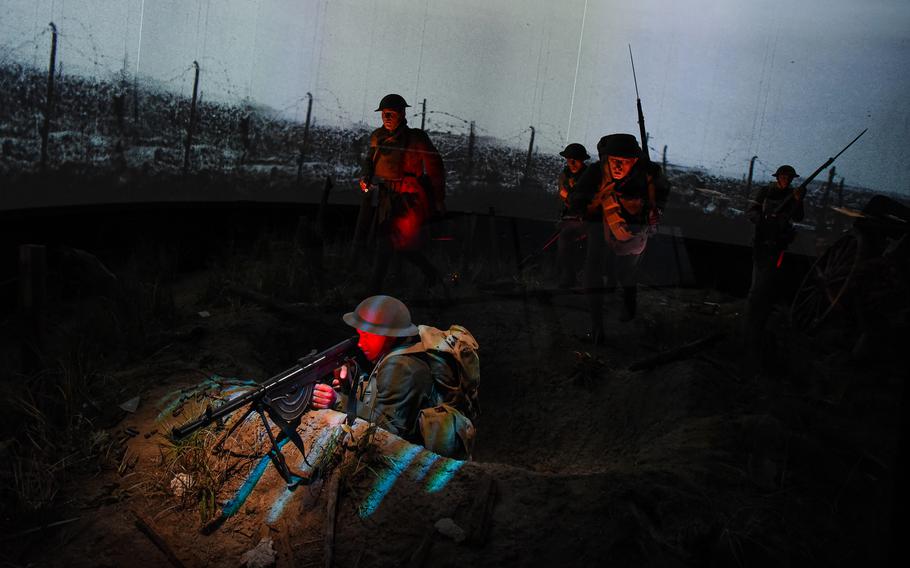 Buy Photo
The National Museum of the United States Army's National Overseas Gallery documents life for American soldiers from 1989 to the 1918, including this immersive scene of soldier fighting during World War I. (Corey Dickstein/Stars and Stripes) 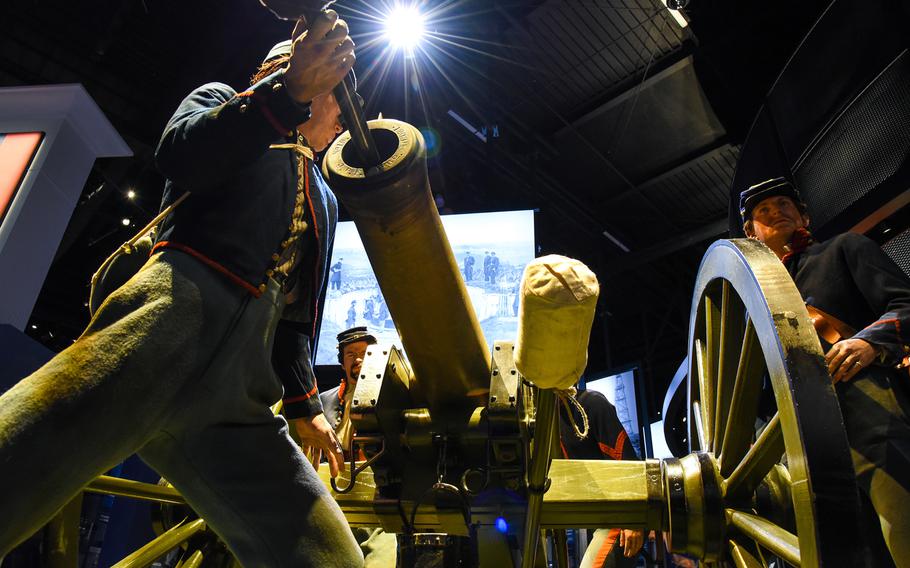 Buy Photo
Cast figures of U.S. Army artillerymen during from the Civil War man a 12-pounder Napoleon cannon in the National Museum of the United States Army's Preserving the Nation Gallery. The cannon is an actual artifact from the Battle of Gettysburg. (Corey Dickstein/Stars and Stripes) 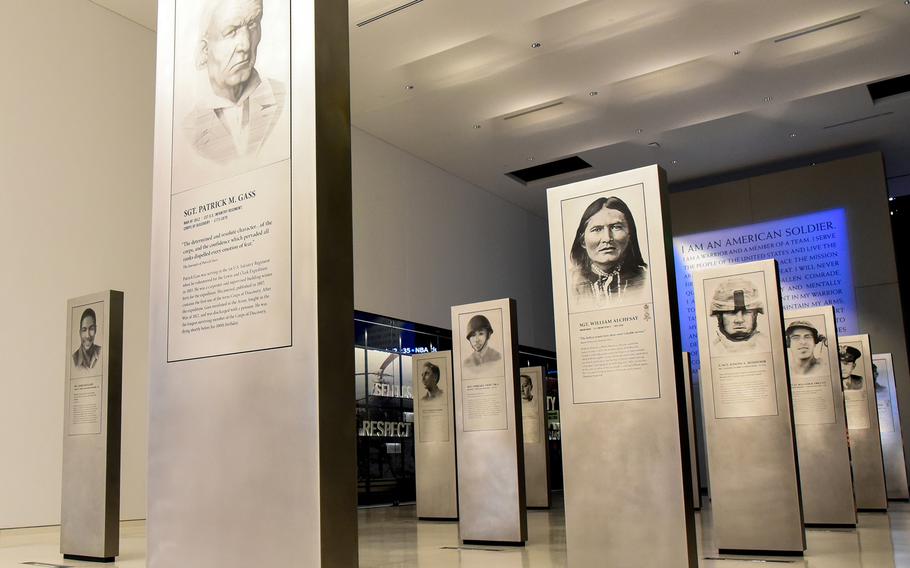 Buy Photo
The National Museum of the United States Army features 41 stainless steel pylons that provide information about individual soldiers in the museum's Soldiers' Story Gallery which extends from outside its front doors, leading into the its main exhibits. (Corey Dickstein/Stars and Stripes)

FORT BELVOIR, Va. — Seventy lifelike cast figures in uniform and bearing arms portray American soldiers from the Revolutionary War to recent combat in Afghanistan are spread throughout the National Museum of the United States Army, set to open to the public Nov. 11.

The figures form centerpieces for the museum’s six main galleries that reflect the Army’s history from its militia roots in the early 1600s through its roles in ongoing wars in the Middle East, museum officials said Thursday. The chronologically arranged galleries feature unique artifacts, short vignettes about soldiers’ personal experiences at war and interactive displays that explain things like the music soldiers listened to in the era and the food they ate.

Tammy Call, the museum’s director, said it was important that visitors experience the chronological history of the Army, to see how the service and warfare has changed over time. But, more than anything else, she said she hoped visitors would find a connection with the unique stories of individual soldiers displayed throughout the museum.

“My greatest desire is that an individual visiting here, that doesn't have a connection with the Army, or that does, that they walk away with knowledge of the American soldier,” Call said. “That they see themselves reflected in our soldiers and that there's that understanding that our American soldiers and members of our Army are American citizens.”

The 185,000-square-foot museum has been a longtime coming. The Army Historical Foundation has worked for more than a decade to build the service’s first comprehensive museum. It will open on Veterans Day, in the midst of the ongoing coronavirus pandemic, just more than three years after the Army broke ground.

The pandemic delayed the opening by about five months, Call said. When it opens Nov. 11, visitors must reserve free tickets online at theNMUSA.org and adhere to certain restrictions, like wearing a face-covering and social distancing. The museum is also providing styluses to allow visitors to work the plethora of touchscreens throughout the exhibits.

Officials wanted visitors to experience what soldiering was like for troops on the ground throughout the Army’s history. A video inside the museum’s Army Theater brings them into the action in Belgium during World War II, in the Ia Drang Valley in Vietnam and the Korengal Valley in Afghanistan, placing them into the heart of the battles with a 300-degree screen. The theater shakes as bomb blasts go off and machine gun fire cuts through the air.

The exhibits include six dedicated to combat, one that examines the connection between the Army and American society, one that shares the history of the nation’s highest military decoration, the Medal of Honor, and a virtual reality gallery where visitors can step into a World War II tank simulator, fly in virtual historic aircraft and even test their marksmanship skills.

Curators said the museum would rotate displays of 1,389 artifacts, most of which the Army has held for years but never before shared with the public. And more items are headed to the museum in the near future, including some from as recent as this year, Call said.

The museum plans to add items from soldiers who were at Iraq’s al Asad Air Base during the Jan. 8 ballistic missile attack by Iran in retaliation for the United States' drone strike that killed their top military figure, Maj. Gen. Qassem Soleimani.

Call said she was not certain Thursday what those items would include, but the staff considered the event a critical part of the Army’s recent history.

“We felt it was so important, just like all the artifacts in the in the exhibit wing … to preserve those items, to get them, to take care of them and to be able to have them available.”

The museum has left room to expand its galleries to include whatever the future holds for the Army, Call said.

Paul Morando, who has been the museum’s exhibits chief for about three years, said his team worked hard to ensure everyone who visits would learn from their time in the building.

“You don't have to be a soldier to be connected to this museum,” he said. “If you never served in the Army, but you can connect to something — a soldier’s story here from the same hometown, and look and see what he or she did for our country, then there’s a connection there.”

The most difficult part, he said, was working within the natural limits in a physical building.

“You can't tell the entire story, of course, of the history of the Army,” Morando said. “This museum would be five times the size if we incorporated every soldier’s story, every aspect of the Army's history. But if we can just reach those visitors through the galleries, through the exhibits, through the artifacts that we have here, then we've done our job.”

Army museum at a glanceLocation: 1775 Liberty Dr., Fort Belvoir, Va.Access: The museum is open to the public and is outside Fort Belvoir’s security gates.To visit: Free tickets are available for timed entry to the museum beginning Nov. 11. They can be reserved at theNMUSA.org.