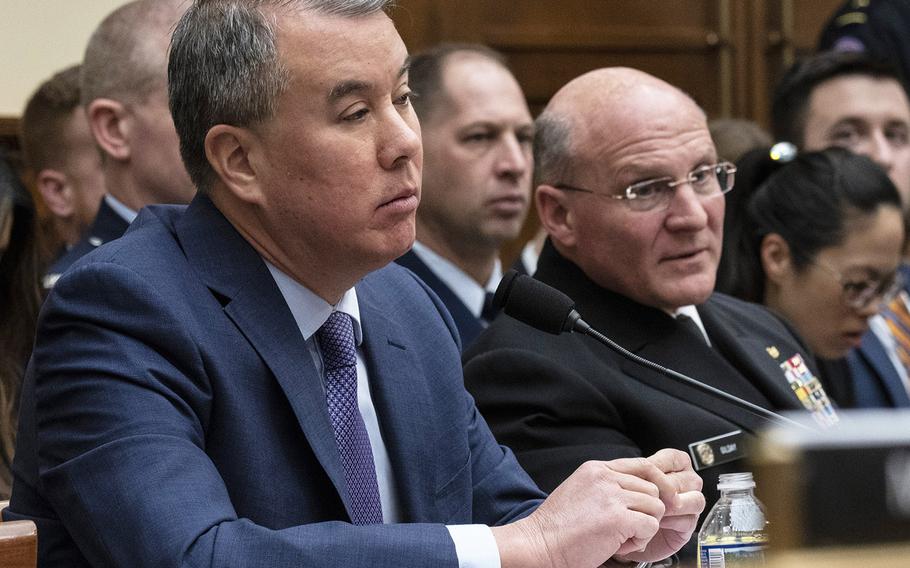 Under Secretary of Defense for Policy John Rood, left, testifies at a House Armed Services Committee hearing on DOD support to the southern border, Jan. 29, 2019 on Capitol Hill. Next to him is Vice Adm. Michael Gilday, Director of Operations (J3) of the Joint Staff. ( Joe Gromelski/Stars and Stripes)

Under Secretary of Defense for Policy John Rood, left, testifies at a House Armed Services Committee hearing on DOD support to the southern border, Jan. 29, 2019 on Capitol Hill. Next to him is Vice Adm. Michael Gilday, Director of Operations (J3) of the Joint Staff. ( Joe Gromelski/Stars and Stripes) 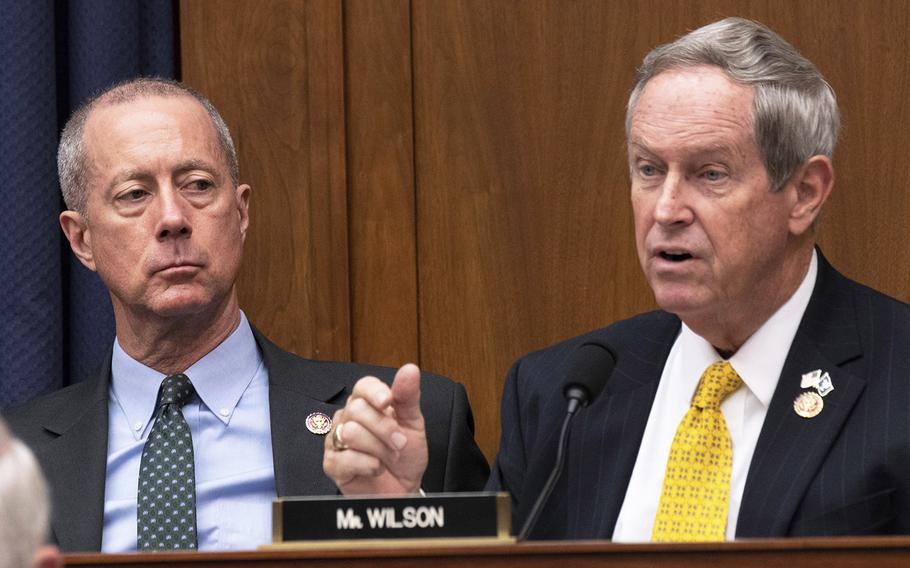 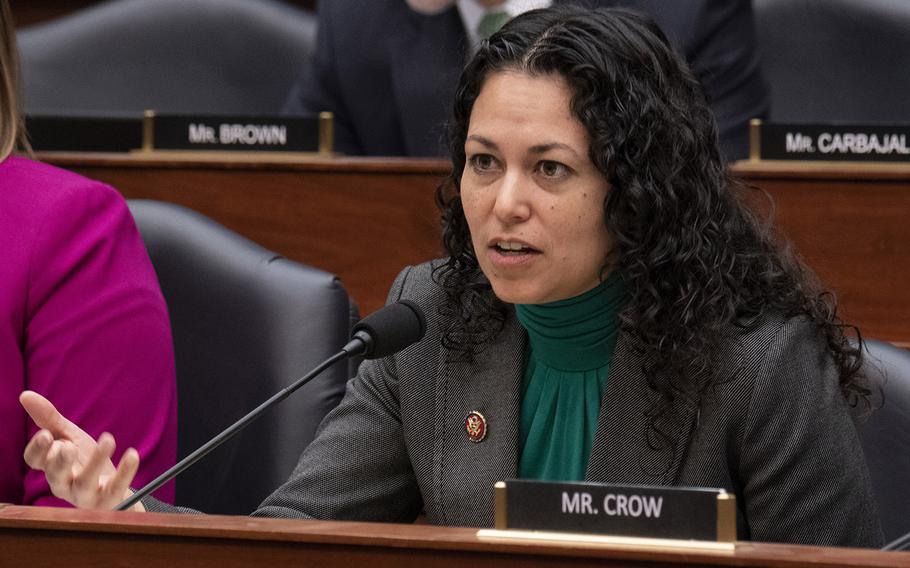 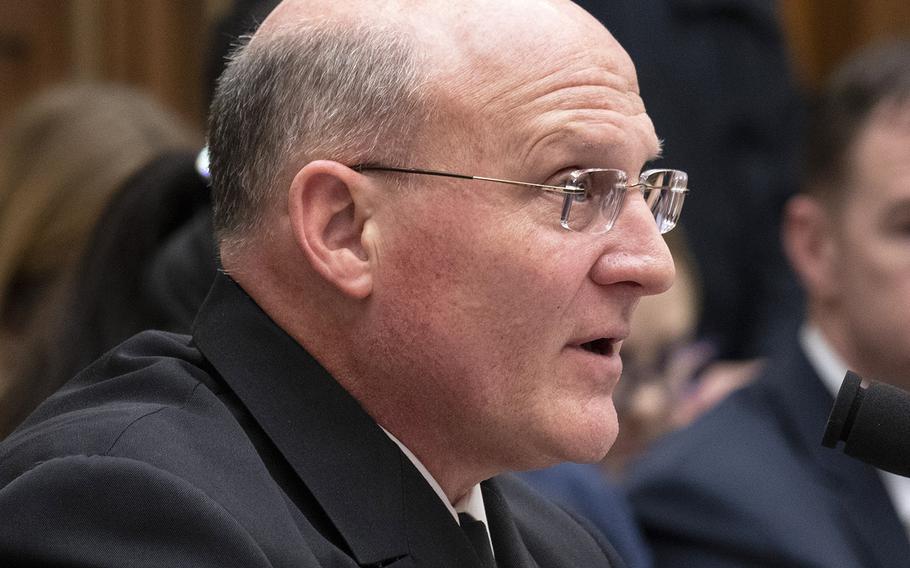 Acting Defense Secretary Patrick Shanahan said Tuesday that an additional several thousand troops would be sent to the U.S.-Mexico border as defense officials told House lawmakers that the deployment of troops there has reached a cost of nearly $700 million.

Defense officials told members of the House Armed Services Committee that the Defense Department will spend more than $680 million on the deployment of active-duty and National Guard troops to the U.S.-Mexico border, which began in April. They said the cost estimate will likely rise as the active-duty troops remain on the southern border beyond January.

As defense officials were about to testify on Capitol Hill, Shanahan held a news briefing at the Pentagon during which he said “several thousand more” troops would be needed to provide the Department of Homeland Security additional support on the southern border.

"We are supporting our federal partners on the border and that mission has been extended until September. We are currently sourcing the units involved and there will be an increase of a few thousand troops. We will provide more clarity on the numbers when we have it," Army Lt. Col. Jamie Davis, a Pentagon spokesman, said in a statement after the briefing.

About 2,350 active-duty personnel are stationed along the border and about 2,270 National Guard members, both providing various resources to Customs and Border Protection agents through an agreement between the departments of Defense and Homeland Security. All the troops are expected to remain through the end of the fiscal year.

At the height of the deployment, about 5,900 servicemembers were stationed along the border in early November.

On Capitol Hill, Navy Vice Adm. Michael Gilday, director of operations for the Pentagon’s Joint Staff, said the cost of active-duty troops from their initial deployment in late October through the end of January was about $132 million.

Committee Chairman Adam Smith, D-Wash., challenged whether the “highly unusual” deployment of active-duty troops to the southern border is necessary.

Smith said there were one million apprehensions at the border at that time, while apprehensions in recent years are about one-third of that. In that time, Congress has acted and nearly doubled the number of Border Patrol agents, built barriers and added drones and ground sensors.

The call for troops along the border began in the spring to get more Border Patrol agents out from behind desks and into the field. National Guard members were the first troops deployed to the border to perform maintenance and administrative duties to free up agents.

The decision to send active-duty troops came in October as a caravan of roughly 10,000 migrants began a long march through Central America toward the U.S. border.

“At that particular time … the Department of Homeland Security wasn’t sure what routes they would take to the U.S. southern border,” John Rood, undersecretary of defense for policy, said during his testimony to the House committee. “[President Donald Trump] directed us to examine options to augment [Customs and Border Protection] at the border to allow them to mass personnel at ports of entry.”

Troops at the border have already laid 70 miles of concertina wire along the ports of entry, but are now being asked to place an additional 150 miles on existing barriers between ports of entry in Arizona and California by March 31.

A new agreement signed Jan. 11 expanded their mission to include surveillance, and Gilday said a pilot program with Marines out of Camp Pendleton, Calif., is underway to determine the training required for troops to operate mobile surveillance equipment in Border Patrol vehicles and vans.

Troops will not intervene directly when illegal border crossings are detected on the new mission, but instead cue Border Patrol agents to intervene, he said. Troops will conduct surveillance in Arizona, California, New Mexico and Texas.

But lawmakers also were worried troop readiness is deteriorating because of the deployment along the southern border.

“If we’re stressed anywhere it’s rotary wing, just because of the demand we have for helicopters in Syria and Iraq and Afghanistan,” Gilday said. “We’ve been a bit pinched for [helicopters], if I can be honest, but we’re not at point where we’re have significant concerns.”

Otherwise, Gilday said many troops are getting valuable training at the border, particularly military police. Alongside Border Patrol agents, they’ve conducted 10 different scenarios at night and during the day, he said.

Military police are also authorized to provide protection for Border Patrol agents should it become necessary, Gilday said. To combat deterioration of readiness and impacts to training, troops are deploying in rotations of about six to eight weeks, he said.

“The border security mission is obviously a high priority for the administration so we are balancing that requirement along with Syria, Afghanistan, ongoing commitments in Africa, the western Pacific, we’re trying to balance all of that,” Gilday said.