More than 5,000 sailors can now receive reenlistment bonus of $30,000 or more for critical skills 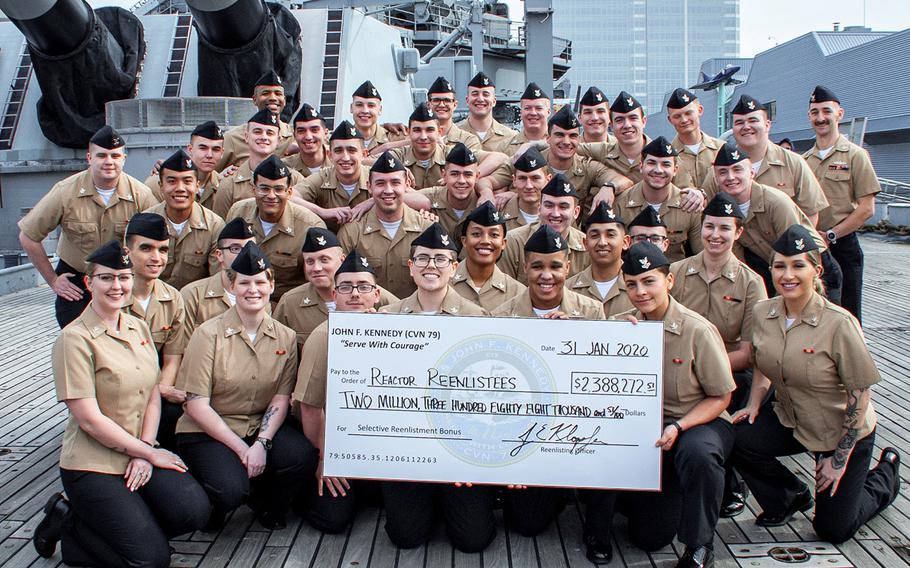 WASHINGTON — Sailors considering their future in the Navy might be entitled to a reenlistment bonus of at least $30,000 after the service recently added more critical skillsets to their bonus eligibility list.

The Navy added 78 more skillsets to be eligible for the fiscal year 2021 Selective Reenlistment Bonus list allowing about 5,220 additional sailors to receive the money, according to the service.

Sailors receive a skillset code after they have completed training for certain skills or knowledge, such as learning a new language or how to repair specific equipment.

“[The bonus] rewards sailors who attain training and skills most needed in the fleet and helps meet critical skill reenlistment benchmarks, while enhancing [the] Navy’s ability to size, shape, and stabilize manning,” according to the Navy fact sheet on the bonus.

The Navy plans to spend slightly more than $379 million on reenlistment bonuses once the fiscal year 2021 defense budget is approved, according to the service. The Defense Department is operating now under a continuing resolution while it waits for Congress to pass the defense funding bill.

There are five bonus levels depending on the need for a specific skill: $30,000; $45,000; $60,000; $75,000, and $100,000. Sailors will receive half of their bonus up front and the remainder will be spread out over the rest of their enlistment, according to the Navy. In addition, if a sailor reenlists in a designated combat zone, they can receive the entire bonus tax free.

The Navy said the service is constantly updating its bonus award levels, so sailors who do not take advantage of the money soon could lose out later.

The bonuses has also increased payouts for 14 skillsets but decreased the money for 51 others. The Navy removed 44 skillsets from the bonus list and left the money amount the same for 107 skills, according to a Navy fact sheet.

Sailors must submit their request for the bonus between 35 and 120 days prior to their reenlistment date, the fact sheet states.