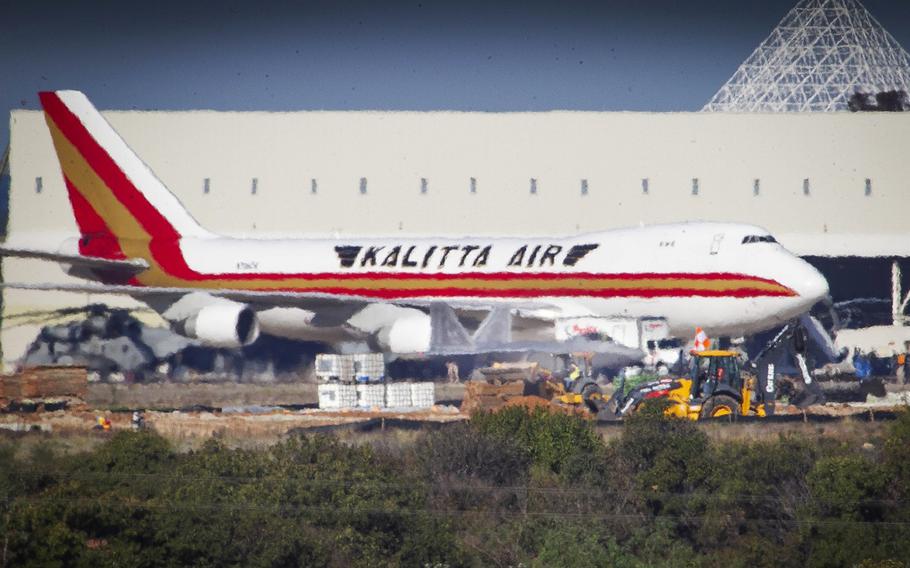 The second flight of U.S. citizens fleeing the coronavirus in China to arrive at MCAS Miramar aboard a Kalitta Air Boeing 747, is unloaded after landing, February 7, 2020 in San Diego, Calif. (TNS)

WASHINGTON — Another 300 evacuees from China have been transported to U.S. military bases as confirmed coronavirus cases and deaths increase, the Pentagon said Friday.

Two State Department-chartered flights from the city of Wuhan, China, with a total of about 300 passengers, arrived in the United States on Friday. One aircraft has arrived at Marine Corps Air Station Miramar, Calif. The other refueled at Travis Air Force Base, Calif., and then proceeded to Lackland Air Force Base, Texas, where it dropped off less than 100 passengers. The remaining evacuees boarded the plane again to travel to Omaha, Neb., said Capt. Jennifer McQuiston, the team leader for the national Centers for Disease Control and Prevention’s operations at Lackland.

The evacuees arriving at the bases will face a 14-day quarantine period that began when the plane left China at 6 p.m. Thursday, Central Standard Time, she said during a Friday afternoon news conference at the San Antonio base. The exact number of people staying in San Antonio and Omaha will be released later.

No evidence of illness was found in any of the passengers as they left the aircraft in San Antonio, said McQuiston of the Public Health Command at Lackland. Evacuees will continue to have temperatures screenings twice a day through their quarantine.

The last federally mandated quarantine occurred more than 60 years ago because of smallpox, she said.

“The goal of our team here is to protect the safety and health of not only these citizens, but the citizens of San Antonio and America and we feel that this is the best way to ensure that protection,” McQuiston said.

On Thursday, the Pentagon announced it had selected 11 Defense Department installations across the United States to assist with housing quarantined evacuees, if necessary, due to the coronavirus at the request of the Department of Health and Human Services.

The installations are near major airports that can house additional passengers should HHS primary and secondary facilities for evacuees become filled to capacity, according to the Pentagon statement.

Defense Secretary Mark Esper is expected to support the request, according to the Pentagon.

As of Friday, there are more than 31,400 confirmed cases of the coronavirus, with most of them in China, according to the World Health Organization. There have been 637 deaths in China from the virus, and one death was reported in the Philippines.

Travis Air Force Base, March Air Reserve Base, as well as Marine Corps Air Station Miramar, all in California, are already housing evacuees. March Air Reserve Base has 198 people who were evacuated and on Wednesday about 350 people on two planes were evacuated by the State Department to Travis Air Force Base and Marine Corps Air Station Miramar from Hubei Province in China, where the coronavirus was first reported in December.

All evacuees arriving in the United States are subject to a 14-day quarantine overseen by the CDC.

The new request from HHS states DOD would only support housing up to 20 people at each location during their quarantined observation period. Office space will also be provided for HHS personnel and their equipment through Feb. 22.

HHS will be responsible for the care, transportation, and security of the evacuees and DOD personnel will not be in direct contact with them, the Pentagon said.

The 11 backup installations identified are: