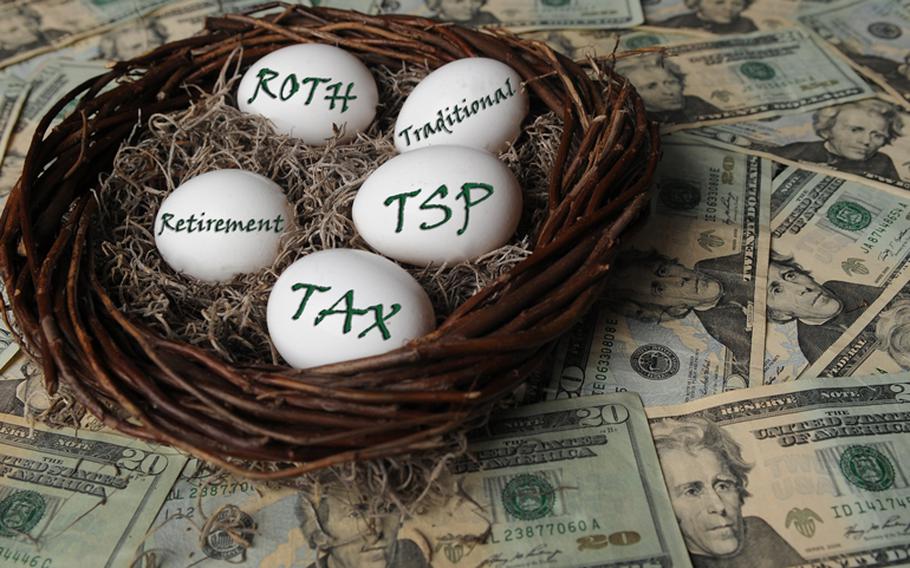 Military savers are discovering the special advantages a Roth-type Thrift Savings Plan (TSP) provides to them, given that their taxable income is dampened by tax-free allowances and periodic tax-exempt combat tours.

“When we were preparing to launch the Roth TSP option, we anticipated it would be particularly attractive to our military participants,” said Kim Weaver, spokesperson for the Federal Retirement Thrift Investment Board, which administers TSP for federal civilian workers and the military.

Service members “generally are lower paid and so don’t benefit as greatly from a traditional pre-tax/tax-deferred option. But allowing them to contribute after-tax dollars that can grow for decades, and that can accept tax-exempt combat pay, is very attractive to military participants.”

Unlike traditional TSP that builds on using pre-tax contributions, Roth TSP contributions come from post-tax earnings. Those savings and any gains generated across a variety of TSP investment options will not be taxed when withdrawn in retirement.

A Roth TSP is especially attractive “for more junior members because their tax liability is low in the first place,” said Jeri Busch, director of military compensation policy in the Office of the Secretary of Defense. “If they put it in post-tax, they get to take it out no-tax. The advantage is there if you expect your tax bracket will be higher when you retire than it is currently.”

The old adage that service members who leave short of 20 years do so with no retirement benefits remains technically true. But many of these same members depart today with retirement savings, thanks to TSP. In April, the average TSP account balance for military participants was $17,400.

Congress first established TSP for federal civilians so they would have the same type of retirement savings and tax benefits that many private corporations were offering to employees through 401(k) plans. TSP with matching government contributions became a critical leg of the retirement reform package designed for federal civilians hired after Jan. 1, 1984.

The uniformed services, including the Public Health Service and the National Oceanic and Atmospheric Administration, were invited to open TSP accounts starting in January 2002. TSP doesn’t alter in any way a robust military retirement plan so service member participants get no government matching to incentivize their contributions.

Even so, military participation rates have climbed steadily for both active and reserve components. Last month, 583,000 active duty service members, or 41.5 percent of the force, made TSP contributions. About 134,000 active duty members were contributing to a Roth TSP.

The Navy has led all services in touting TSP to recruits and has the highest participation rate by far, at 61.4 percent. Air Force is second at 40.1 percent, followed by Coast Guard at 39.7, Marine Corps at 35.8 and Army at 31.8. About 70 percent of PHS and NOAA officers have TSP accounts.

Members who don’t open TSP accounts might not understand how it can be a valuable lifetime savings tool. After leaving service, veterans and military retirees can’t continue to make tax-deferred contributions unless they become federal civilian employees. However, they can roll private sector 401(k) accounts into TSP, where fees are quite low, as they move between civilian jobs. Individual Retirement Accounts can be transferred into TSP at anytime. TSP loans against account balances offer attractive rates.

TSP administrators, from time to time, have pointed out to Defense officials the disparity of participation across services.

“The rates do seem to reflect the emphasis that the various branches have put on educating their service members,” said Weaver.

In 2009 Congress changed the TSP law to automatically enroll federal civilians who fall under the Federal Employees’ Retirement System. The thrift investment board proposed auto-enrollment for military members too, but the Department of Defense opposed the move, Weaver said.

Busch said the Department of Defense is pleased with the level of military participation. It views TSP as a valuable, long-term savings vehicle for members but it is not part of their direct compensation, Busch said. Surveys of military personnel show that more than 90 percent know about traditional TSP and about half of all members know about the Roth option.

Given the tax advantages and the convenience of saving and investing using payroll deductions, Busch said, “I would suggest to any individual they ought to consider” TSP. “It’s in their best interests no matter who they are.”