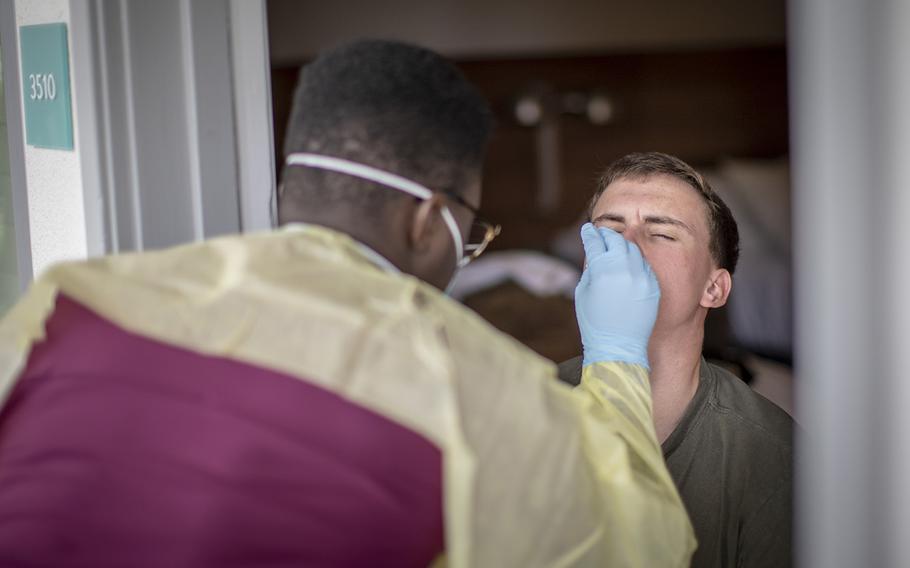 WASHINGTON — More than 6,000 soldiers have been infected with the coronavirus, giving the Army roughly 1,000 cases more than the Navy, once the hardest hit of the military services, according to the Pentagon.

In the early weeks of the coronavirus pandemic, the Navy led the other military services in cases, in part due to the outbreaks aboard the USS Theodore Roosevelt and USS Kidd.

Between Monday and Wednesday, the Army added 302 cases among its soldiers, according to the Pentagon. The Navy added 128 more cases of the virus from Monday and the Air Force added 206 cases. The National Guard added 169 cases, and the Marine Corps added 132 cases from Monday.

The number of coronavirus cases among service members now stands at 18,968 according to the Pentagon.

The rise in cases among service members comes as cases in the United States continue to surge, growing to 3.5 million cases Thursday, according to data from Johns Hopkins University. On July 1, Thomas McCaffery, the assistant secretary of defense for health affairs, said the Defense Department is seeing increases in military cases in locations where there has been a rise in civilian cases.

“In Florida, Texas and Arizona, some parts of California, so that wouldn't be a surprise that we're a part of the community and so where there are some upticks, we’re seeing that as well,” he said.

Those four states have among the highest number of new cases during the past seven days, according to the Centers for Disease Control and Prevention.

Some of those same states with growing cases are now seeing military installations reinstate travel restrictions due to the pandemic, according to the Pentagon data released Wednesday.

Travel restrictions were put in place in March to try to prevent the spread of the virus within the Defense Department. Defense Secretary Mark Esper signed a memorandum May 22 that laid out the conditions needed for locations to allow for travel to and from bases.

The installations that have reinstated travel restrictions are: the Army’s Fort McCoy in Wisconsin; Naval Air Station Corpus Christi in Texas; Naval Submarine Base Kings Bay in Georgia; Luke Air Force Base in Arizona; Nellis Air Force Base in Nevada; and Marine Corps Base Camp Butler in Okinawa, Japan.

“If installation conditions are subsequently not met, the approval authority decides if travel restrictions should be reinstated,” the Pentagon document states.

Installations have to meet specific criteria in order to have the travel restrictions lifted, including no local stay-at-home orders, a local decrease in cases and availability of essential services, according to the document.

Several of the installations that lifted restrictions are based overseas in countries such as Germany and South Korea. Installations that have recently lifted travel restrictions include the Army posts in Kaiserslautern, Germany, Naval Station Newport in Rhode Island and Naval Air Station Whidbey Island in Washington state.