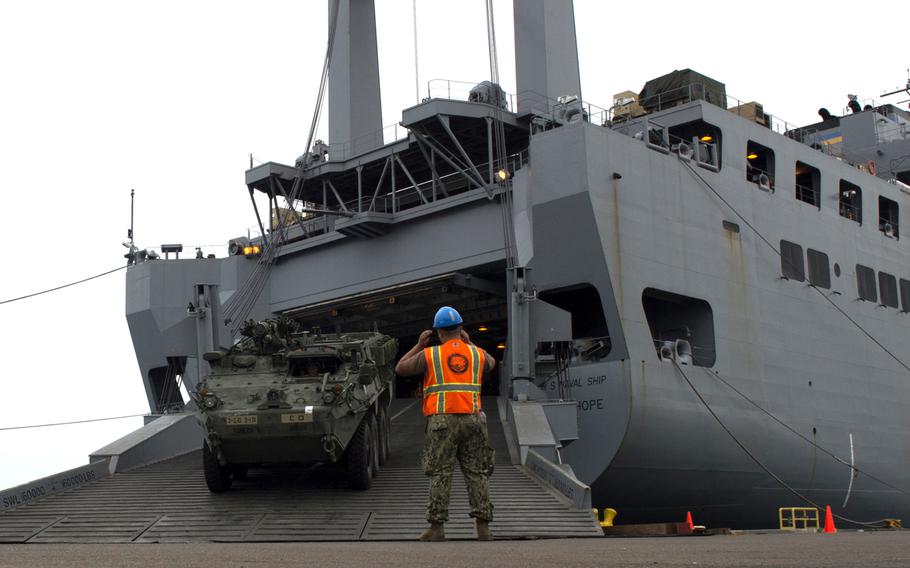 A U.S. Navy seaman directs cargo arriving off of U.S. Naval Ship Bob Hope as part of a turbo activation at the Port of San Diego in August 2017. U.S. Transportation Command began a similar turbo activation Monday to test the ability to get forces across oceans in the event of a fight with Russia or China. (Haley Phillips/U.S. Air Force)

STUTTGART, Germany — The U.S. military has ordered dozens of ships to sea in a massive stress test to determine if reserve transport vessels — crucial for mobilizing large numbers of troops and forces in a conflict — are up to the job.

U.S. Transportation Command began the sealift readiness exercise Monday in what amounts to one of the largest such no-notice “Turbo Activation” drills since the exercises began in 1994.

“These exercises typically involve only a few ships but this event targets 28 vessels for activation to provide a better assessment of the readiness of U.S. sealift forces than can be accomplished with fewer activations,” TRANSCOM said in a statement Tuesday.

The activated ships are required to shift from a reduced operating status to a fully crewed status, with the quarters made habitable and cargo gear ready, within five days.

For the military, an aging transport fleet has been an area of concern, particularly as the military emphasizes the need to adapt to rising threats posed by China and Russia. In the event of a large conflict, the military would be called upon to mobilize forces and heavy equipment, much of which would need to move by sea.

Lawmakers have issued warnings that with no clear plan to replace decades-old transport ships, the military may not be able to get forces across oceans in the event of a fight with Russia or China.

Among the concerns is a rapidly aging Ready Reserve Force of 46 transport ships, which are on average about 44 years old. The Navy’s plans for extending the service life of the ships, such as procuring used vessels and devising a new construction strategy, hasn’t yet delivered.

“The steel is rotting,” said retired Rear Adm. Mark Buzby, administrator of the Maritime Administration, in testimony during a congressional hearing on the issue earlier this year.

Since the end of the Cold War, the military has not had to contend with an adversary capable of disrupting its global mobility plans, all of which were untested during the wars in Iraq and Afghanistan. During that time, investments in logistics capabilities declined.

During the past two years, there have been repeated warnings about the risks the military faces because of its decaying transport fleet.

In 2017, the Government Accountability Office found that the Navy may not be able to support its warships in combat if it doesn’t upgrade a fleet of supply ships that are growing old and losing their ability to quickly provide food, fuel and equipment.

And last year, a special task force of returned admirals and generals organized by the Defense Department cautioned “significant shortfalls that, if left unaddressed, will put at risk U.S. ability to project power and sustain the fight against a strategic competitor.”

Now, the military is testing various reserve ships, which are located throughout the U.S and maintained in the event the Pentagon needs them “to support the rapid, massive movement of military supplies and troops for a military exercise or large-scale conflict,” TRANSCOM said in Tuesday’s statement.

The exercise tests and validates that the ships are ready and able to meet activation time standards and Pentagon mission requirements, the command said.