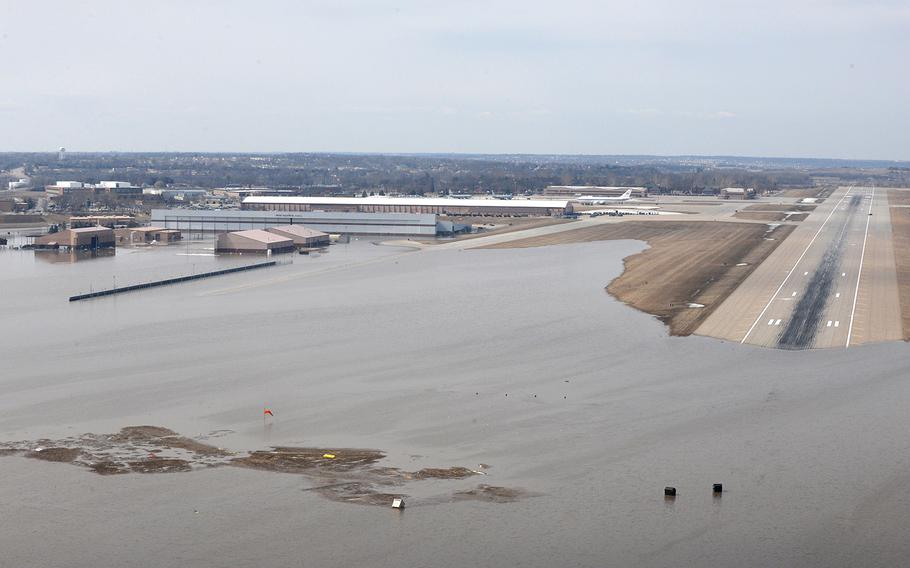 An aerial view of Offutt Air Force Base and the surrounding areas affected by flood waters on March 16, 2019. An increase in water levels of surrounding rivers and waterways caused by record-setting snowfall over the winter in addition to a large drop in air pressure resulted in widespread flooding across the state of Nebraska. (Rachelle Blake/U.S. Air Force)

Offutt Air Force Base is operating with only essential personnel and the National Guard’s Camp Ashland is completely closed as floodwaters remain high at both Nebraska bases from massive flooding over the weekend after rivers breached several levees following heavy rain and snowmelt upstream.

Military officials at the bases said Monday that they are surveying damage as they wait for the water to recede, which isn’t expected until Thursday.

Flooding began Friday at Offutt, which is near Bellevue, peaked Sunday evening and flooded about one-third of the base. Overnight, the water only receded about one foot, Col. Michael Manion, commander of the 55th Wing Command, which is headquartered at Offutt, wrote on his Facebook page. He also oversees base operations.

His team at the base is now preparing its priorities for when the water recedes, focusing first on safety and then on “generation of combat power,” he wrote.

Since preparation began Friday, the colonel has chronicled online the devastating flooding that now covers much of the southeastern portion of Offutt. That area includes the majority of the aircraft hangars for the wing’s RC-135s, fixed-wing reconnaissance aircraft, said Ryan Hansen, 55th Wing spokesman. The majority were moved to higher ground on the base and eight were flown off base to a National Guard facility in Lincoln and MacDill Air Force Base in Tampa, Fla.

Base officials evacuated the Base Lake, a recreational camping area, early Friday and personnel worked around the clock to fortify facilities with more than 235,000 sandbags and 460 flood barriers to minimize damage as much as possible, according to a news release on the Offutt Facebook page.

But the efforts couldn’t stop the water from overflowing. With 30 buildings flooded and one access gate blocked by water, the base, which is also home to U.S. Strategic Command, is open only to mission essential personnel. About 10,000 people work on the installation. Of those 6,500 are active-duty servicemembers.

The flooded facilities range from the 55th Wing’s headquarters to a veterinary clinic to a 55th Maintenance Group facility that is on the edge of the flooded area. Hansen estimated the maintenance facility is flooded with water about 2 to 3 feet high, with other base facilities further east flooded worse.

No housing or barracks were flooded, Hansen said.

“It is extremely clear that we face a grand challenge,” Manion wrote Sunday with photos of the airfield’s partially flooded runway. “Our goal is to only reopen when it’s safe.”

At about 6:20 p.m. Sunday, Manion posted the water levels stayed the same for about 12 hours and were not expected to rise. However, the Army Corps of Engineers predicted the water won’t begin to recede until Thursday.

Record-setting snowfall this winter is now melting, causing water levels to rise in the Missouri and Platte rivers and Papio Creek. Offutt sits north of where the two rivers meet.

Camp Ashland, a training site, is about 25 miles west of Offutt on the Platte River and is “completely underwater,” said Spc. Lisa Crawford, spokeswoman for the Nebraska National Guard. Flooding there began Wednesday and the 225 soldiers on base taking classes were evacuated.

Over the weekend, a levee protecting the base broke and military officials have not been able to access the base and assess damage, Crawford said.

“Right now we are focusing our attention on response efforts for the rest of the state and will assess our needs at a later time,” she said.

The Nebraska National Guard has nearly 80 servicemembers conducting medical evacuations as well as air and ground rescue missions, said Master Sgt. Michael Houk, spokesman for the National Guard. Since Friday, about 111 people have been rescued. Equipment in use includes three UH-60L Blackhawk helicopters and one LUH-72A Lakota helicopter.

Ashland flooded despite updated infrastructure following catastrophic flooding in May 2015, reported the Omaha World-Herald. In response, the Guard spent about $3.7 million installing flood gates on some buildings, rebuilding others on stilts and adding additional flood-control measures.

With the water moving downstream, flooding has begun in Missouri with hundreds of homes flooding as levees are breached in the northwestern part of the state, The Associated Press reported. Military C-130 planes, designed to transport cargo or people, were evacuated last week from nearby Rosecrans Air National Guard Base in St. Joseph.