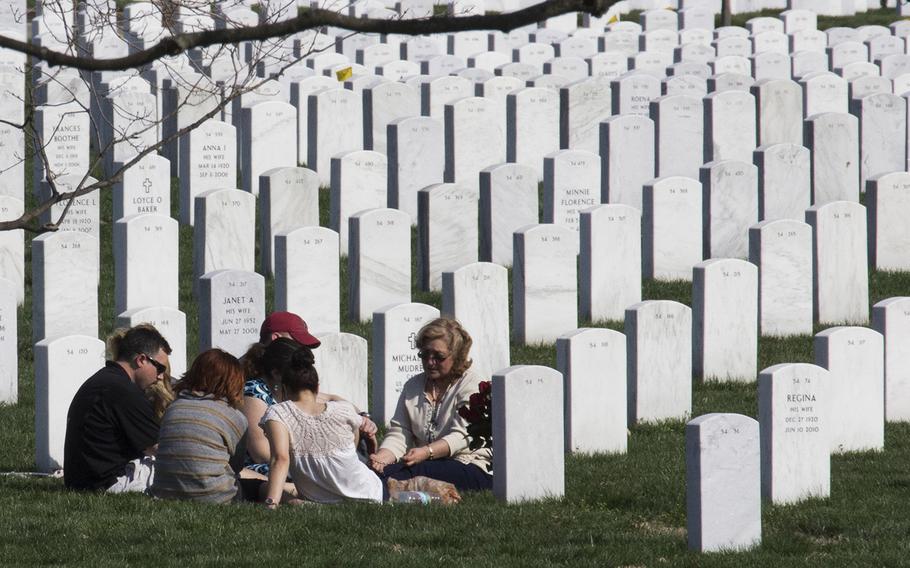 Gathering to remember a loved one at Arlington National Cemetery. (Stars and Stripes)

WASHINGTON — Sen. John McCain claims an expansion of Arlington National Cemetery could be scaled back because the county and state of Virginia want to build a bus facility there.

The Republican senator from Arizona sent a letter this week to Army Secretary John McHugh calling the possibility “shameful” and urging the service to maximize the number of plots in the project.

But Arlington County said Friday that it is still negotiating with the Army on a small parcel that may be created when a highway is moved and that the land is not deemed suitable for burial.

The national cemetery could reach capacity within a decade and is encouraging cremations and enforcing strict burial regulations to save space. But the Navy Annex facility that once overlooked the Pentagon has been demolished and offers an opportunity for an additional 7,600 internment sites.

The Army has yet to reach a final development agreement with Arlington and the Virginia Department of Transportation, which each own part of the land.

“It would be shameful to have to tell the family of a fallen American hero that there is no space available at Arlington National Cemetery, because rather than expand its grounds, Arlington County and the Virginia Department of Transportation decided to build a bus maintenance facility,” McCain wrote in the letter, a copy of which was shared with the media.

McCain asked McHugh to “use whatever tools available to you” to maximize the amount of land used for the national cemetery and to restrict the county and state from developments that are not compatible.

Arlington County is weighing the construction of a transportation facility, a local museum and expanded facilities for the Air Force Memorial on a 7.5-acre portion of the old Navy Annex land.

The parcel could be cut off from the cemetery by Columbia Pike if the state highway is realigned according to a tentative agreement between the Army and the local governments.

County spokesman Brian Stout said the space is unsuitable for burials and negotiations are now focused on how the county will develop the land for its own uses.

“We’re closer than we’ve ever been to a resolution on this,” Stout said.

Arlington County provided Stars and Stripes letters it sent to the Army over the past two months regarding the negotiations.

“I understand the Army’s concerns with the county’s proposal to potentially locate a transit operations and maintenance facility on land the county would receive south of a realigned Columbia Pike,” Acting County Manager Mark Schwartz wrote July 8. “Let me be very clear – we share your goal of making sure that such a facility would not adversely impact the environment for families and visitors at Arlington National Cemetery.”

The Virginia Department of Transportation did not respond to requests for comment.