A video screenshot shows Marines in Washington, D.C., responding to an accident in which a woman was pinned underneath a car on Nov. 7, 2020. The Marines lifted the car using two jacks, saving vital time for fire and rescue officials who arrived on the scene shortly afterward. (U.S. Marine Corps)

A video screenshot shows Marines in Washington, D.C., responding to an accident in which a woman was pinned underneath a car on Nov. 7, 2020. The Marines lifted the car using two jacks, saving vital time for fire and rescue officials who arrived on the scene shortly afterward. (U.S. Marine Corps) Staff Sgt. Jeffrey Belko, shown here in a video screenshot, was the guard duty officer at Marine Barracks Washington in Washington, D.C., when a woman was hit by a car and remained trapped underneath on Nov. 7, 2020. Belko and other Marines used jacks to help lift the car off the woman. (U.S. Marine Corps) 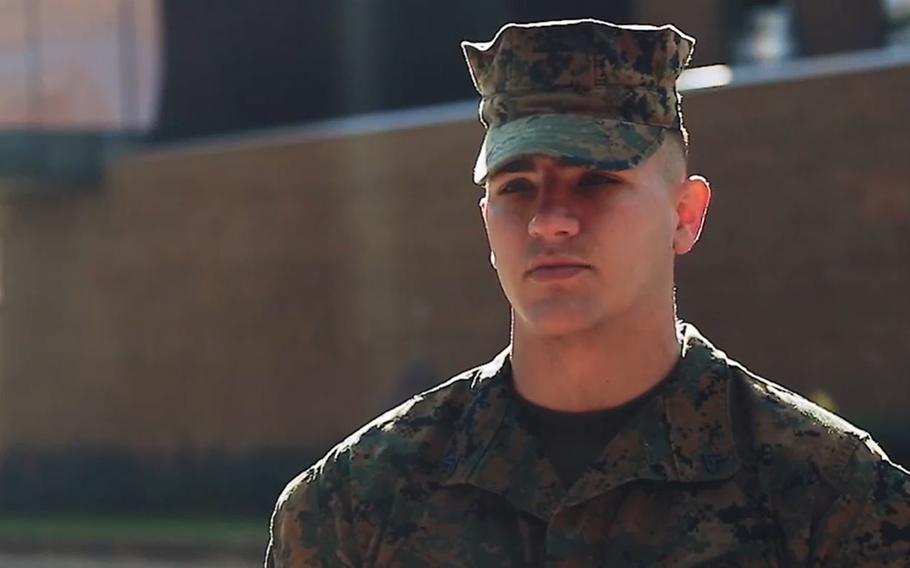 Marine Cpl. Denny Bohne, shown here in a video screenshot, was one of the Marines at the Corps' historic barracks in Washington, D.C., who helped lift a car off a woman after an accident on Nov. 7, 2020. (U.S. Marine Corps)

Things could have gone tragically wrong for a woman who was hit by a vehicle and pinned underneath it this month as she rode a scooter in downtown Washington, D.C., but for the fact that the accident happened near the Marine barracks in the capital.

“I was just going to the chow hall to get some breakfast and we hear a Marine call out, ‘A woman was just run over by a car,’” said Cpl. Denny Bohne of Guard Company, Marine Barracks Washington, on 8th and I Streets near the Navy Yard, in a video posted on Facebook of the dramatic rescue that followed. The accident happened a block away from the barracks.

Bohne and other Marines rushed to the car, removed the jack from the trunk and began lifting the back of the vehicle. Staff Sgt. Jeffrey Belko, who was the guard duty officer when the accident occurred on Nov. 7, used another jack that was handed to him by a passerby to lift the front of the car.

The Marines’ actions “were integral to reducing the amount of time it took for us to take care of that victim,” said Lt. Leo Ruiz, a rescue worker from D.C. Fire and Emergency Medical Services, who helped take the woman to a hospital.

It was unclear what injuries she sustained, but the woman survived, thanks in large part to the Marines’ actions, Ruiz said in the video.

“Honestly, if they hadn’t done what they had done, it could have delayed care for that victim,” he said. “We’re always taught in the fire service when you talk about EMS and trauma care, that (it’s imperative) getting those victims ... to the right place quickly, and they absolutely helped us to do that.”

The Marines who helped rescue the woman were “relieved that she made it out okay,” Bohne said.

But they played down their heroism, with Belko saying the actions that saved the woman were “a team effort” including D.C. rescue workers and passersby who chipped in to help.

“Marines run to the sound of the gun, so it didn’t surprise me at all the Marines were there,” Belko said.