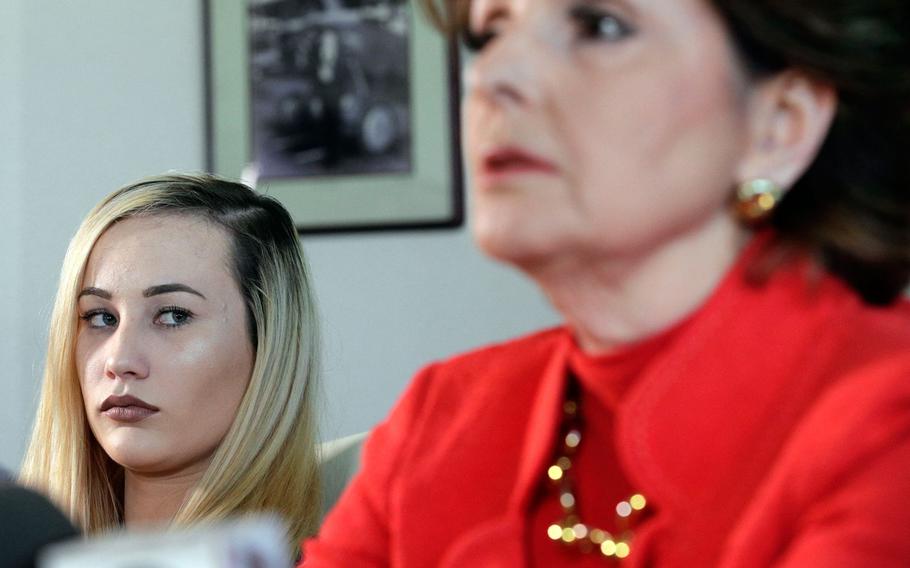 In a March 8, 2017 file photo, active-duty Marine Marisa Woytek, left, and attorney Gloria Allred announce at a Los Angeles press conference that photos of Woytek and of another former female Marine were secretly posted online without their consent. (Nick Ut/AP Photo)

WASHINGTON — The Marine Corps has punished two California-based Marines for derogatory remarks that they expressed on social media about a female Marine and service leadership, and law enforcement agents have uncovered at least 56 people suspected of involvement in a nude-photo sharing scandal, military officials said Friday.

The punished Marines were both reduced one rank Wednesday in a non-judicial sentence that also included 45 days of extra punitive duties for their remarks posted on the Facebook page “United States Grunt Corps,” said Lt. Col Warren Cook, the commander of 2nd Battalion, 4th Marine Regiment at Camp Pendleton, Calif., the unit to which the Marines are assigned.

It marks the first time active-duty Marines have faced discipline for inappropriate actions on social media and comes in the wake of the photo-sharing scandal uncovered in February that Marine leaders have said indicated the service had a cultural problem.

Cook said the two Marines he punished failed to maintain “the good order and discipline of the unit.”

“The Marines and sailors of 2nd Battalion, 4th Marines do not tolerate personal attacks on their Marines -- online or elsewhere,” he said. “This kind of behavior flies in the face of our service’s core values and this organization refuses to condone it.”

The Marine Corps declined to identify the two Marines by name. One was a junior enlisted Marine and the other was a noncommissioned officer, a Marine official said on the condition of anonymity.

Meanwhile, the Naval Criminal Investigative Service’s director said Friday that the service had identified 15 active-duty servicemembers who appear to be involved in felony-level criminal activity related to sharing nude photos on the Internet without the consent of the subjects of the photos. Fourteen of the suspects are Marines and one is a sailor, Andrew Traver, the NCIS director, told reporters at the Pentagon.

NCIS has also identified 12 civilians who could face felony charges for their involvement. Traver said the investigation is ongoing and more suspects could be identified. Officials said it was too early in the process to determine what charges suspects involved in the scandal could face.

The initial investigation centered on a private Facebook group of some 30,000 active-duty and veteran Marines and Navy hospital corpsmen called “Marines United,” in which officials said a secret drive was circulated containing potentially hundreds of explicit photos of female Marines and derogatory – sometimes violent -- comments about them. Traver said Friday the investigation has spanned to more than 150 websites and investigators have reviewed some 75,000 images of female and male servicemembers.

Nonetheless, only 27 individuals have been identified as potentially committing felonies. The NCIS has turned over a list of 29 additional names to the Marine Corps of suspects whose actions might not be felonious but could be grounds for misdemeanor-level criminal action or non-judicial punishment, Traver said. He did not specify what those individuals’ actions were or what potential punishment they could face.

Marine Gen. Glenn Walters, the Corps’ assistant commandant, said the service distributed material this week to commanders detailing the wide range of non-judicial punishment that Marines involved in the scandal could face. He declined to provide specific examples. Non-judicial punishment has the potential to end a servicemembers’ military career.

In recent weeks, the Marine Corps has issued several service-wide changes that it hopes will help address underlying cultural issues that might have emboldened some Marines to act inappropriately online. The service updated its social media policy last month to include language indicating Marines actions online could be punished criminally.

Walters said those options are some of about 150 potential changes that a task force organized to study the Corps’ culture has already identified as ways to address the cultural issues that led to the scandal.

“That’s our goal – to build men and women of character who serve in the ranks.”