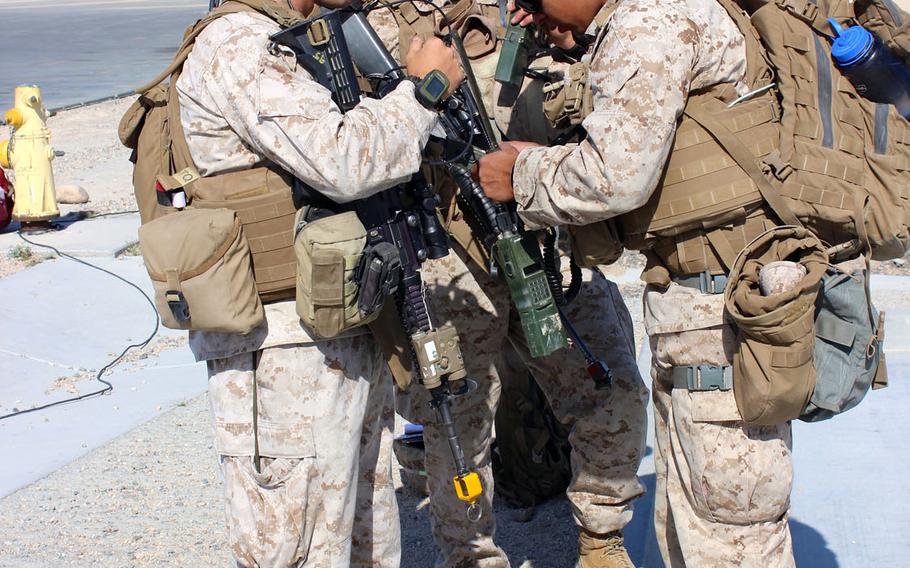 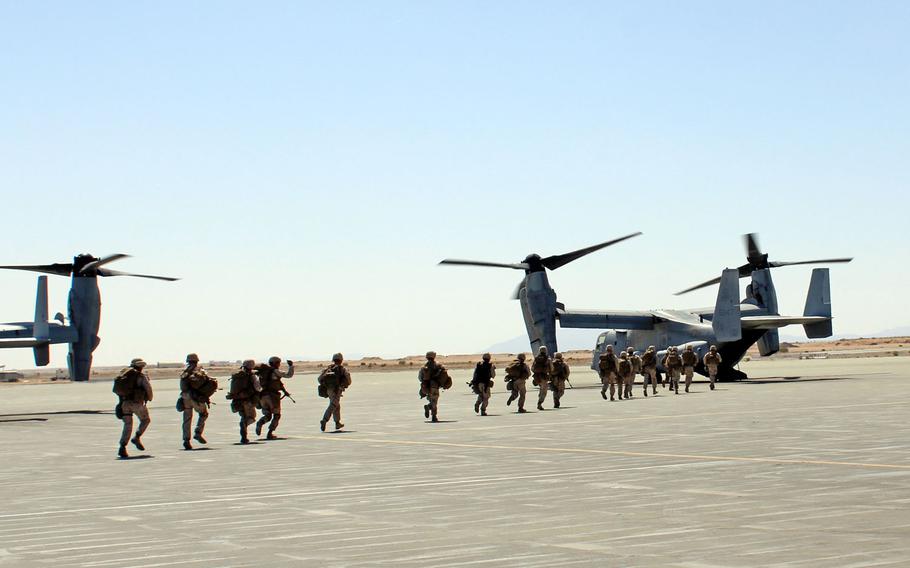 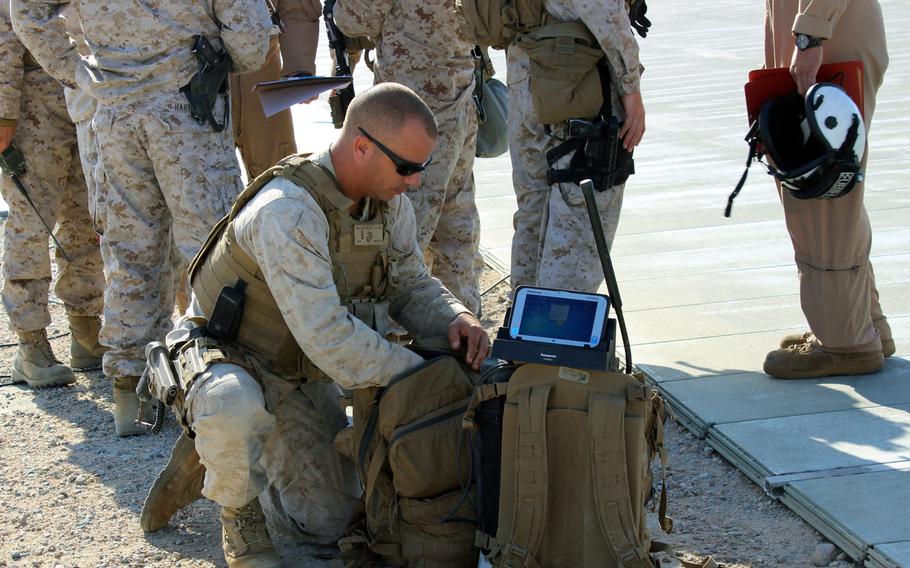 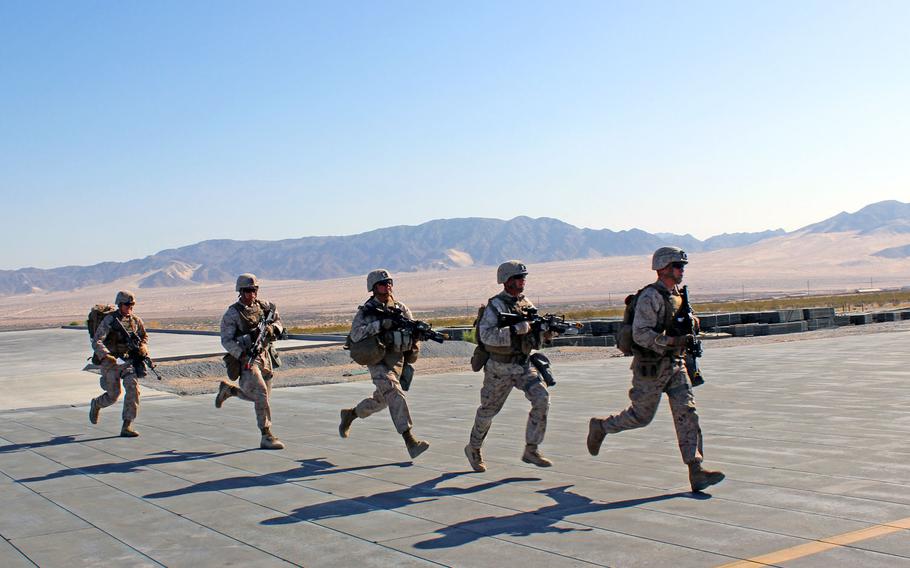 TWENTYNINE PALMS, Calif. — A lot can change in a few hours. A landing zone that was clear when Marines took off could be overrun by hostile forces. A hostage could have been moved. A terrorist leader could have driven to a different location.

But despite remarkable changes in technology during the last 50 years, Marines riding in the back of one of the most advanced aircraft in the world have virtually the same communication capabilities as Marines riding a CH-46 into Vietnam.

Platoons of Marines flying hundreds of miles to a target in 2015 are forced to rely on paper maps and a questionable radio for communication outside the belly of the Osprey. But Marines throughout the Corps are working to fix that, creating new programs and stringing together existing systems so that digital information can be beamed seamlessly from an aircraft to troops on the ground and back again.

“We’ve got to adapt,” said Maj. Scott Cuomo, an infantry officer who works as the Marine air ground task force for Marine Corps aviation. “We’re Marines. We’re going to do this.”

Since the rifle squad is “the nucleus of the Marine Corps,” Cuomo said, the central tenant of the digital interoperability effort is increasing situational awareness for troops on the ground.

The Naval Air Warfare Center, Weapons Division and DARPA in 2010 began developing a program that uses Android tablets to provide a digital link between troops on the ground and the aircraft above them, allowing infantry Marines to see intelligence from drones in real time and to call in air support much faster and more accurately.

The ground portion of the program, known as the Kinetic Integrated Low-cost SoftWare Integrated Tactical Combat Handheld has already been used by Marine Expeditionary Units and Special Purpose Marine Air Ground Task Forces in Iraq and Afghanistan. The full system, which integrates ground and air elements, was successfully tested in late March as part of a large-scale infantry and aviation training exercise in Yuma, Ariz.

Marines who have used the program are passionate about its ability to improve communication and situational awareness and its speed and accuracy. But some worry about security. A few years ago, Marine aviators began carrying iPads loaded with Google maps on their flights, so they’d have the right map if the target location changed. The devices must be kept on airplane mode to avoid any possibility of being hacked.

Similarly, even when Marines are in a location where cellphone towers are prevalent, they can’t use civilian technology and unsecure networks to send sensitive and secret data.

Since the DARPA program hasn’t been officially named a program of record, a handful of Marines with 1st Marine Division came up with a way to use gear they have for an interim solution.

Chief Warrant Officer Chris McAllister, a cybernetwork operations engineer with 1st Marine Division’s communications section, helped develop what the Marines call a “bridge system.” The system links existing secure networks to extend communication for ground troops — whether they’re on the ground or not.

The program is part of the Marine Corps’ push for commanders to be able to communicate with troops on the move, said Col. George Malkasian, 1st Marine Division’s assistant chief of staff for communications.

The world is becoming increasingly complex, and the capabilities of the V-22 Osprey mean small units of Marines may be in the air for six hours without the ability to receive maps and updated information about a target, Malkasian said.

The Marines want the bridge system to handle chat capabilities, digital file transfers and the ability to automatically send location information to ground troops and commanders, he said.

The eventual solution will likely be a hybrid of many of the best ideas, Malkasian said, but the Corps will find a way to make it work.

First Marine Division first tested its system during an exercise in December, but quickly realized that they hadn’t provided enough training to the ground troops using it. Leaders changed the way they introduced the system to a new group of infantry Marines, and earlier this month tested it for the first time with that unit, in a long-range raid simulating a pilot rescue mission where the situation changes during the flight.

Capt. Jake Dove, commander of Charlie Company, 1st Battalion, 7th Marine Regiment, had the latest information about the pilot’s possible whereabouts when the Ospreys lifted off, but en route, the system was supposed to allow the Marines to get confirmation and an image of his location from an intelligence drone in the area.

The system didn’t work perfectly once the Marines were in the air: They could chat from plane to plane, but not with commanders in the operations center.

“Any mission where we can get information as it’s happening can improve situational awareness,” he said.

Cpl. Matthew Pellegrini, a radio operator who carried one of the tablet-like computers onto the aircraft and operated it during the raid, likened the system’s abilities to group text messaging and Google Maps. The location information capability also creates “a little breadcrumb trail” for the unit, he said.

And though things didn’t go as planned, Dove said the exercise was a good starting point for the unit, which will continue to work with the system before deployment this fall.