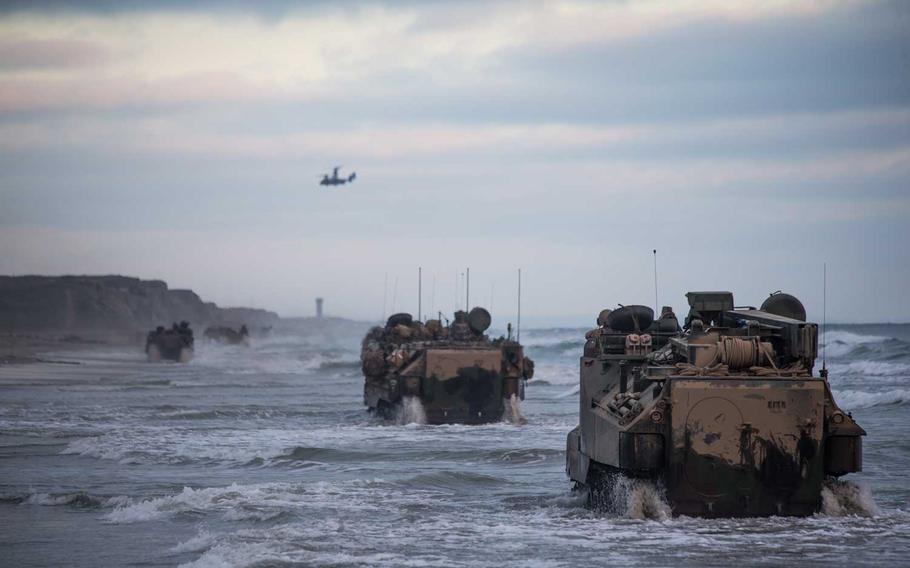 WASHINGTON — Marine Corps and Navy officials told House lawmakers on Monday that they are looking at ways to create a culture of safety following the sinking of an assault amphibious vehicle that killed nine service members last year.

“The sinking of this AAV and the deaths of eight Marines and one sailor were preventable. Preventable in so many ways. But we failed,” Gen. Gary Thomas, assistant commandant of the Marine Corps, told members of a subpanel of the House Armed Services Committee.

A “confluence of human and mechanical failures” caused the sinking of the AAV off the coast of California in July, according to a nearly 2,000-page internal investigation released in March that found the deadly training accident was preventable.

The unit’s vehicles were in “horrible condition” and 12 out of 13 were inoperable, though they should have been ready for land and water operations, the investigation concluded.

Thomas and other military officials spoke at the hearing about lessons learned after the investigation, how to lower the risk of preventable accidents and build a culture of safety within the Marine Corps and Navy.

“If we can, with our education system, our reporting systems create an environment where people are comfortable, I think we'll make a lot of headway towards the safety culture that we need,” he said.

That includes looking at how to instill in leaders the importance of conducting oversight, identifying risk, stopping operations and rewarding hazard reporting.

The nine service members, part of Battalion Landing Team 1/4 of the 15th Marine Expeditionary Unit, drowned as their AAV sunk during a training exercise ahead of a deployment.

The AAV was traveling back to the USS Somerset when the vehicle began to take on water. The investigation found there were no proper safety boats on the water. It also found the accident was caused by a sequence of mechanical failures, a communications breakdown inside the AAV, and a lapse in training.

Eleven Marine Corps members in the chain of command have been disciplined so far for their roles in the accident. Review boards are still considering whether a majority of them should be separated from the service, Thomas said. Some have had lesser discipline taken against them, he said.

Last month, Thomas also directed Lt. Gen. Carl Mundy III to lead a new investigation into the forming of the Marine Expeditionary Unit, including training and readiness oversight. It was unclear Monday what led to the latest probe.

He said all Marines must be empowered to “assess risk and speak up when they see something unsafe.” Commanders must also foster a climate that rewards hazard reporting to improve the overall safety culture of the service.

“Historically, the Marine Corps has a culture of instinctively relieving everyone after a mishap or a disaster, without parsing individual command responsibilities. ... Clearly there was some oversight there that should have happened, whether in regards to [coronavirus] training timelines or basic oversight of this AAV battalion,” said Rep. Seth Moulton, D-Mass., a Marine Corps veteran who served four tours in Iraq.

The investigation found some leaders properly reported on training and material deficiencies, but these reports either were ignored or the leaders were punished for escalating concerns up the chain of command.

The Marine Corps made a series of recommendations as a result of the accident once the investigation was released in March that include reviewing the effectiveness of life preservers, underwater egress training, and the employment of safety boats during waterborne operations.

In coordination with the Navy, the recommendations include a review of standard operating procedures for AAV operations and the amphibious combat vehicle program to ensure lessons learned from AAV accidents are incorporated into training and operations.

Rep. John Garamendi, the chairman of the readiness subpanel of House Armed Services Committee, criticized the Marine Corps’ recommendations, citing the lack of a path for service members to “blow the whistle and call time-out.”

He said 137 Marines have died in various accidents during the last decade, and 60 members within the last five years.

“Clearly, [pausing the exercise] could and should have happened in this tragedy, but it didn’t,” Garamendi said.

“In all the exercises that we do across the Marine Corps every day, every exercise at some point, Marines are standing up and closing operations, and that's exactly what we need to do in this case, which is where we failed,” he said.

The Navy, including a panel of 16 subject-matter experts within and outside both services, is conducting a separate investigation into the incident. It will provide findings on planning, Navy and Marine Corps integration, and training and operational safety.

That investigation is expected within 30 days, said Vice Adm. Roy Kitchener, commander of Naval Surface Forces. The Navy has not resumed waterborne AAV operations since a safety pause after the accident.

The probe also will examine what actions and decisions Navy personnel made that day that could have contributed to the accident, and what policies and practices are required or that must be improved, among other items.

“I am working deliberately and urgently with my Marine Corps counterpart to look across the full range of Navy, Marine Corps integrated operations to ensure that our operating procedures are aligned, including a joint policy on the use of safety boats and clear lines of authorities during training evolutions,” Kitchener said.

A subsequent investigation into AAVs directly after the accident found the majority of the vehicles failed inspection and should not be in use. The mechanics who had been inspecting the vehicles returned them, up to code for land operations, but not waterborne operations.

“We had a problem across the fleet with our watertight integrity. Some 54% of the vehicles that were inspected had failures in the watertight integrity of their plenum doors, that’s the large intakes of the front, to permit air to come in and out of an engine that's underwater,” said Maj. Gen. Gregg P. Olson, staff director of the Marine Corps.

Olson said they have upgraded manuals and instructions to ensure the vehicles are inspected to the highest level of detail necessary to determine discrepancies in whether the vehicle is safe for both types of operations.

Rep. Mike Johnson, R-La., asked Thomas what the process is for ensuring changes and recommendations issued as a result of the investigation are incorporated in the service policy and doctrine.

Thomas said an oversight panel, led by a flag officer, is looking at the recommendations and those individuals are leading briefings on the progress that has been made until the action is complete. Part of that also includes providing an action plan to Congress.

Garamendi said the House subcommittee intends to hold another hearing to follow up in about six months to make certain the recommendations have been implemented.