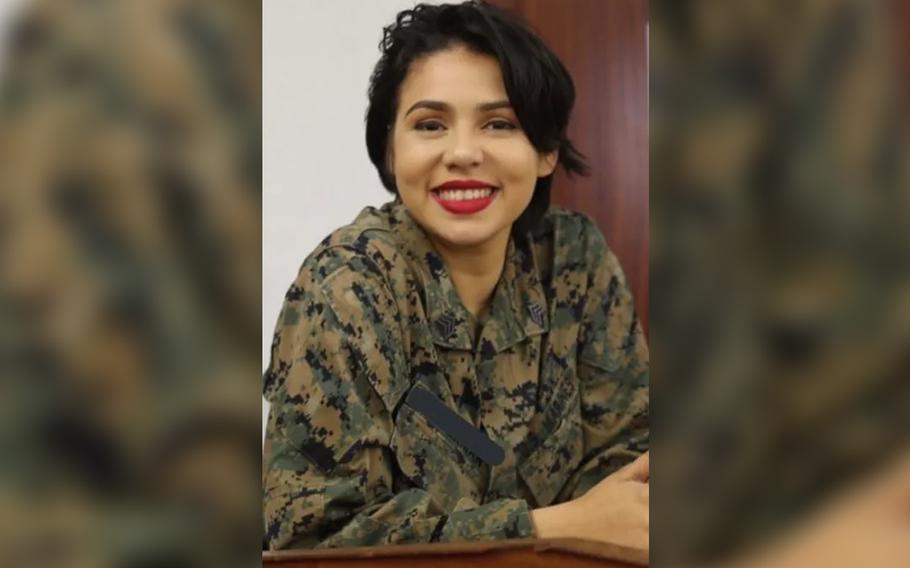 Dalina was deployed in October 2019 when she reported her coworker, a platoon sergeant and a uniformed victim advocate, for sexual misconduct, according to her statement. (Not My Reality)

WASHINGTON — The female Marine whose distressing video about another Marine’s sexual misconduct against her said Wednesday that her perpetrator was her unit’s platoon sergeant and a uniformed victim advocate.

“I am not a one in a million story. I am lucky I have been able to stay safe,” she said in a statement published by Protect Our Defenders, an advocacy organization that works to end sexual violence in the military. “My name is Dalina, I am not a martyr, I am a sergeant in the Marines who has served honorably.”

He was removed from the base after a military protective order was put in place, but she was kept in the dark for months by her former command about what actions were taken against him, according to her statement. Dalina later found out that he had faced administrative punishment and not a court martial.

After an investigation, the Marine was found guilty of violating Article 117a of the Uniform Code of Military Justice and received a nonjudicial punishment, Capt. Angelica Sposato, a spokeswoman for II Marine Expeditionary Force, said in a statement about the case.

The article prohibits showing or distributing an intimate or sexually explicit image of another person who is identifiable and did not consent to the image being shown or distributed. The Marine Corps said the Marine had transferred the images from the woman’s phone to his phone and distributed them.

The UCMJ article is relatively new and was adopted in response to the 2017 Marines United scandal in which intimate images of military women and spouses were distributed and viewed through a private Facebook group comprised primarily of active-duty service members and veterans.

The unnamed male Marine had his rank reduced, forfeited an unknown amount of pay, and was being administratively separated from the service, according to Sposato. The final steps of the separation process are still ongoing, she said.

The Marine’s ongoing administrative separation was the impetus for Dalina’s viral TikTok video posted Thursday where she voiced her dismay after hearing that he would be able to stay in the service despite his admission of guilt.

Dalina was able to testify at his separation hearing in December and posted another TikTok video that showed her getting ready beforehand.

“For so long I looked for reasons why I deserved this. How I could let this happen to me,” she wrote as captions on the video, which showed her visibly upset at one point. “But today I’m going to tell the story of how he took me from me. Here’s to the first step of getting my life back. Here goes nothing.”

Dalina said Wednesday that the separation board had decided to force him out of the Marine Corps but allow him to receive an honorable discharge. Last Thursday, she said she learned a commanding general “had decided to retain this Marine despite his crimes committed against me.”

“I was allotted the opportunity to go home and, while under extreme duress, I made a video on TikTok,” she said Wednesday. “I will not apologize for using social media as an outlet to grieve. I have been sexually assaulted in the Marine Corps, I have experienced Military Sexual Trauma throughout my entire time in service.”

It is still unclear Tuesday who the commanding general is and why that person would have been able to make changes in the case.

Defense Secretary Lloyd Austin said Friday that he found the Marine’s video “deeply disturbing” and he had asked his staff for additional information.

After outrage spread last week about the video’s content, including responses of concern from members of Congress, Sposato said Dalina has since met with her chain of command at II MEF and was given “advocacy and support resources.”

Dalina said she is lucky to have her current command, which has been understanding about her situation.

“So many men and women, enlisted, commissioned, active, and veterans have not had the same opportunities as I have had to get justice,” she said.

On Wednesday, Sen. Jack Reed, D-R.I., the new chairman of the Senate Armed Services Committee, said the committee is “going to be very serious” about addressing sexual assault and harassment in the military.

One way that the issue could be addressed is through removing the chain of command from these cases, which has been proposed previously in Congress and will be considered again as part of the fiscal year 2022 National Defense Authorization Act, the annual legislation that lays out policies and requirements for the Defense Department, Reed told reporters.

“Over a decade or more, we have tried different approaches to limiting sexual assault, sexual harassment, and also retaliation, which is another critical issue. And we haven't seen the progress, frankly, that we hoped. And so, I think the idea of separation is once again on the table,” he said.

With the goal being prevention, Reed said if changing the military’s judicial system would help to accelerate the prevention efforts, then removing the chain of command should be considered.