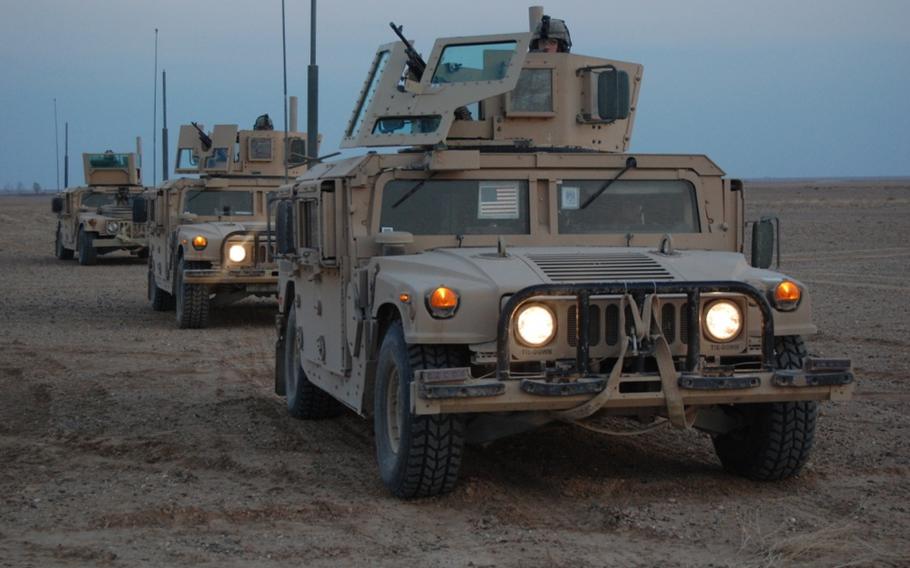 A M-1151 armored Humvee is shown during a refueling stop in Iraq. (Johnpaul Arnold/U.S. Army)

WASHINGTON — A Marine was killed Sunday in a vehicle accident during training in California, the same day that three soldiers were killed in another training crash in Georgia, the Marine Corps said Tuesday.

Pfc. Christian Bautista, 21, of Cook County, Ill., was killed at about 7:15 a.m. in a M-1151 Enhanced Armament Carrier vehicle at the Marine Corps Mountain Warfare Training Center in Bridgeport, Calif., according to a statement by Capt. Stephen Washburn, a spokesman for the 1st Marine Logistics Group. Two Marines in the vehicle attempted life-saving measures before the arrival of paramedics, who pronounced him dead at the scene.

Also Sunday three soldiers from Fort Stewart, Ga., were killed when the Bradley Fighting Vehicle that they were training in rolled off a bridge and submerged upsidedown in water. Three other soldiers, who were not named, were injured in the single-vehicle accident that occurred at about 3:20 a.m.

Bautista was a motor vehicle operator serving as a turret gunner for the vehicle, which is similar in appearance to a Humvee, according to Washburn. However, Washburn could not say Tuesday whether Bautista was in the turret at the time of the accident, citing the ongoing investigation. No one else was injured in the accident. No additional details about the accident were provided in the statement.

"Our primary concern is for the Marine we’ve lost, his family, friends, and fellow Marines and sailors,” Brig. Gen. Roberta L. Shea, commanding general of 1st Marine Logistics Group, said in a prepared statement. “We have them in our prayers and will exhaust all resources to aid them during this difficult time."