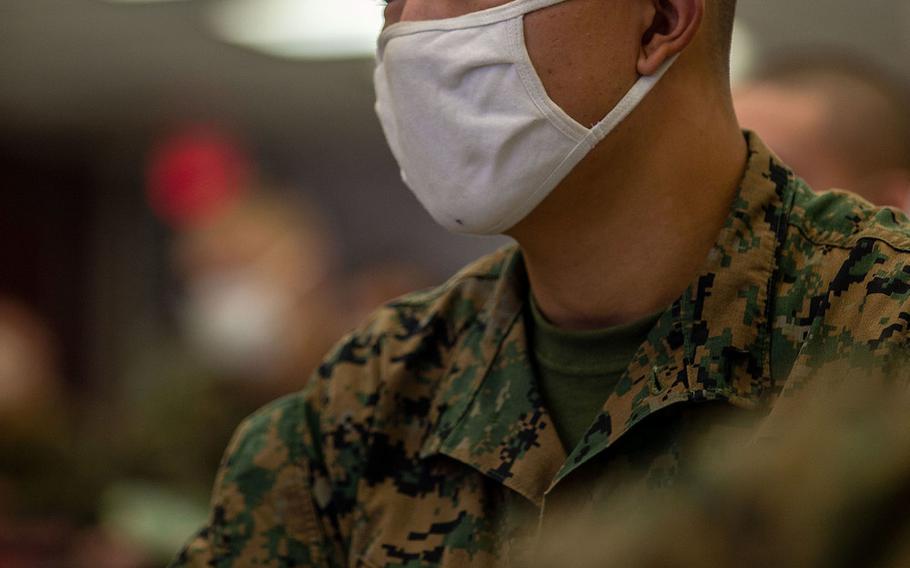 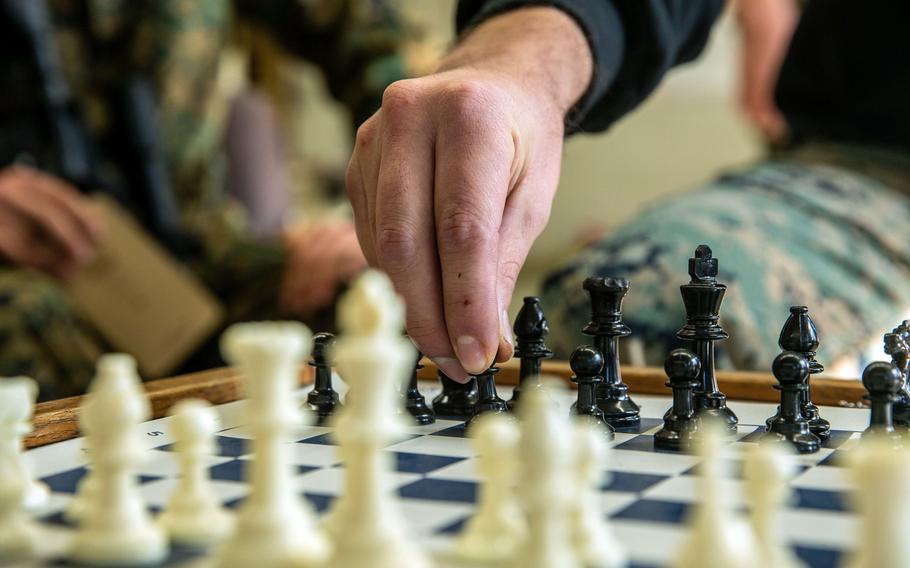 Marine Sgt. Alec Escalante, a squad instructor with Alpha Company, Infantry Training Battalion, School of Infantry-West, moves a chess piece during a class on how chess correlates with battle tactics, as part of the first week of the Infantry Marine Course at SOI-West on Marine Corps Base Camp Pendleton, Calif., Jan. 27, 2021. (Andrew Cortez/U.S. Marine Corps) 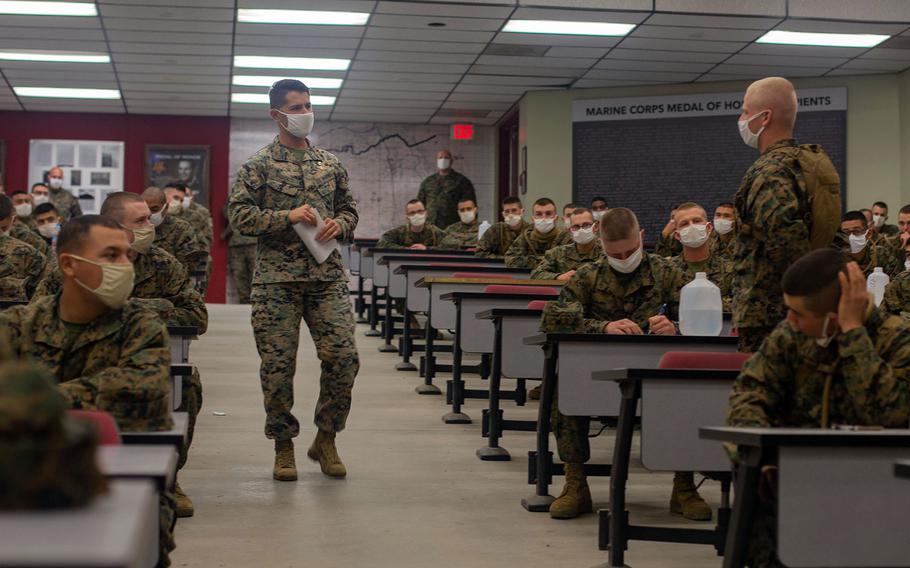 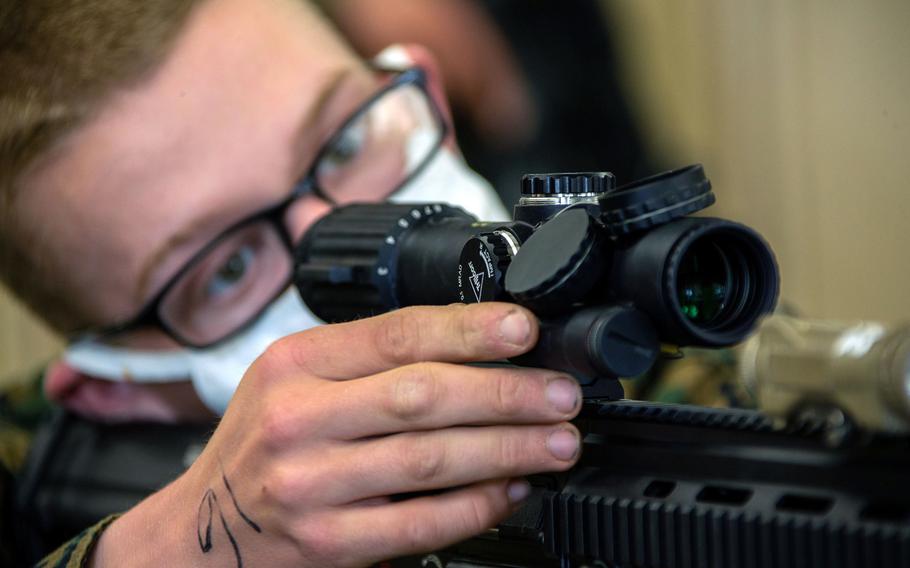 Marine Pvt. Francesco Baffa, a student with Alpha Company, Infantry Training Battalion, School of Infantry-West, aligns the optics on his rifle as part of the first week of the infantry course at Marine Corps Base Camp Pendleton, Calif., Jan. 27, 2021. (Andrew Cortez/U.S. Marine Corps)

The Marine Corps is ditching some of its formation marches and adding board games to a new, longer entry-level infantry training course aimed at creating Marines who can better think and act for themselves.

The Infantry Marine Course pilot program launched last month at the service’s School of Infantry-West on Camp Pendleton, Calif., where instructors were pictured instructing new Marines on how chess relates to battlefield tactics. The course focuses less on micromanagement and more on individual responsibility, the service said in a statement.

“Rote memorization, instant obedience to orders are good for certain things, and they’re not getting thrown away from this course,” Chief Warrant Officer 3 A.J. Pasciuti, the training battalion’s gunner, said in Friday’s statement. “We’re just going a step further, and understanding that the individual — and a collective of individuals — is what wins in combat.”

The new course was developed over a year and is based on Commandant Gen. David Berger’s plan for revamping the service for future conflicts.

Under Berger’s vision, grunts will be expected to fight in small units that will be highly mobile and independent, and often dispersed far from headquarters. The new course is aimed at giving rookie Marines the tactical and cognitive skills to act on their own, and takes a “fundamentally different approach” than its eight-week predecessor, the Corps said.

“To be more dispersed and more precise, we need privates now that can operate by themselves and don’t have to be told and shown where to go all the time,” said Lt. Col. Walker Koury, the training battalion’s commander.

The unit’s Alpha Company is taking the course first before a second one launches at Camp Lejeune, N.C., later this spring. It’s expected to alternate two more cycles between the east and west coasts before being finalized next year, the statement said.

Already about double the length of the course it’s meant to replace, the pilot is expected to eventually grow to 18 weeks, USNI News reported late last year. The added time and a dedicated combat instructor to lead each squad of 14 Marines allows for more practical application and repetitions, the service said in its statement.

Reflecting the transition from the industrial era to the information age, the Marine Corps’ seeks to shift from creating what Koury described to USNI News as “automatons” to what Pascuiti has called “autonomous Marines.”

“Through freedom of thought and freedom of action ... they’ll have a higher level of understanding,” Pasciuti said. “Rather than ‘Do a thing because I said so,’ it’s ‘get to a fundamental end state, and here are the tools that can help you achieve that goal.’”

After initial training on a topic, Marines will be expected to apply their own thinking the next time it comes up. Instead of following itemized gear lists and being marched where they need to be, they’ll be expected to be more responsible for themselves throughout the course.

Playing chess is meant to encourage them to think about their actions in a complex environment. They’ll also no longer be trained in terms of narrow specialties such as rifleman, machine gunner, mortarman or anti-tank missileman, but instead will be expected to be proficient in every company-level weapon by graduation.

“The infantry Marine of the future will be able to do all (the skills of the specialties) and understand when and where that skill needs to be applied,” said Staff Sgt. Jude Stewart, the lead marksmanship instructor for Alpha Company.

Later weeks of the training will focus on testing the Marines’ knowledge while they work in fire teams and squads, learning to patrol over complex terrain and employ fire and maneuver tactics. Students also will lead several force-on-force actions during the latter phase.

“What we have to recognize is these young Marines, through a collective of individuals, will win the day for us,” Pasciuti said.