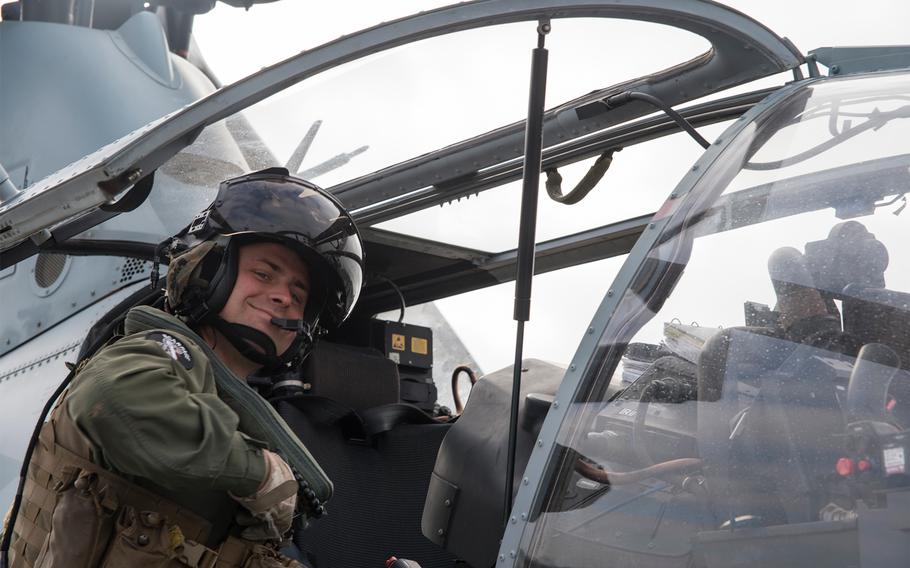 Marine Capt. Travis Brannon was one of the two pilots killed during a AH-1Z Viper helicopter crash in Yuma, Ariz. on March 30, 2019. (Zachary DiPadova/U.S. Marine Corps)

The pilots were flying an AH-1Z Viper as part of the Weapons and Tactics Instructor course, Marine Corps Air Station Yuma officials said on Facebook. The crash occurred at about 8:45 p.m. at the air station's training grounds, and its cause remains under investigation.

Wiegand was assigned to Marine Aviation Weapons and Tactics Squadron One, according to a Marine Corps statement. He joined the service in 2008 and held qualifications in the AH-1W Super Cobra and AH-1Z Viper.

Wiegand previously deployed in support of a Unit Deployment Program on Okinawa and participated in numerous bilateral exercises with joint and foreign partners, the statement said. His personal decorations include the Navy and Marine Corps Achievement Medal with gold star in lieu of second award.

Brannon was assigned to Marine Light Attack Helicopter Squadron 367, Marine Aircraft Group 24, 1st Marine Aircraft Wing in Kaneohe Bay, Hawaii. He was attending the Weapons and Tactics Instructor course at the time of the crash, according to the Marines.

Brannon participated in Marine Rotational Force Darwin in Australia, and his personal decorations include the Global War on Terrorism Service Medal and Sea Service Deployment Ribbon.

“We join the families of Maj. Wiegand and Capt. Brannon in mourning the loss of a loved one,” Col. Kelvin Gallman, commander of Marine Aviation Weapons and Tactics Squadron One, said in a statement. “Our most valued assets are the individual Marines and our primary focus is supporting the families during this difficult time.”

The seven-week Weapons and Tactics Instructor Course involves “planning and implementation of air and ground tactics through a series of escalating evolutions” to train and certify the instructors who serve as squadron training officers and aircraft and weapons subject matter experts, according to Marine Corps’ descriptions of the course.