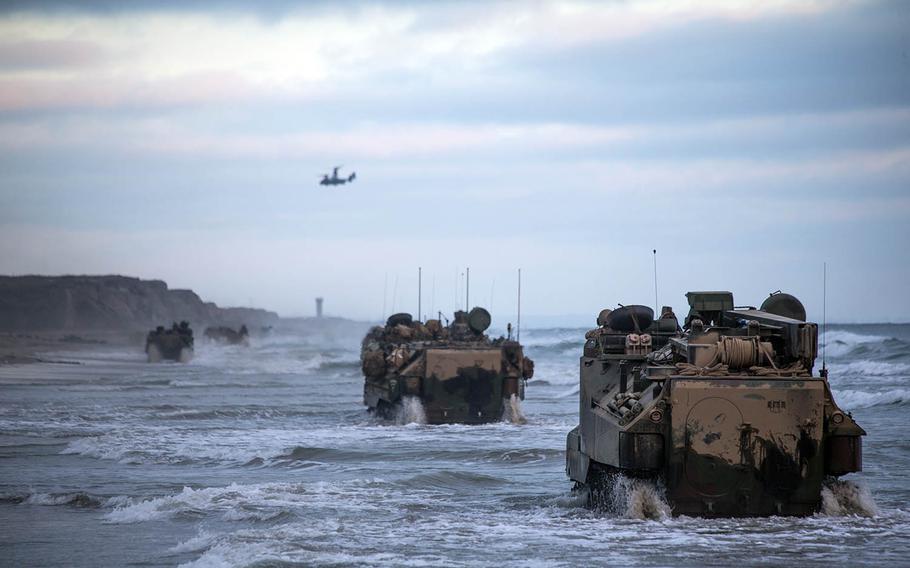 A fatal accident last summer involving an assault amphibious vehicle off the California coast was caused by disregarding proper maintenance, improper training and a failure to evacuate personnel in a timely manner, the Marine Corps said Thursday.

Eight Marines and a Navy corpsman from Bravo Company, Battalion Landing Team 1/4 died after the vessel sank on July 30. The Marines at the time called it the deadliest training accident in its history with that vehicle.

Other contributing factors included a lack of safety boats in the water, waves that were higher than had been anticipated and poor buoyancy from personal flotation devices, according to a Marine statement.

Col. Christopher Bronzi, commander of the 15th Marine Expeditionary Unit, was relieved Tuesday “due to a loss of trust and confidence in his ability to command” in connection with the maritime disaster, the Marine Corps announced earlier this week.

The service said Thursday that the commanding officer of Battalion Landing Team 1/4, as well as the commander of the battalion’s Bravo Company, were relieved on Oct. 13.

Administrative or disciplinary action had been taken against seven other personnel “whose failures contributed to the mishap,” the Marine Corps said.

None of those individuals were identified in the statement.

Thirteen assault amphibious vehicles were on the water moving personnel from the USS Somerset, an amphibious transport dock, to San Clemente Island that morning, the Marine Corps said in a brief narrative of the sinking.

Mechanical failure on one of the 26-ton vehicles while it was still at San Clemente Island forced some personnel and vehicles to remain while nine other vehicles started for the ship. One of the vehicles began taking on water in multiple spots. Its transmission failed, and bilge pumps could not pump at a proper rate because of that failure, the Marine Corps said.

The vehicle commander gave the distress signal as it began to sink, but no safety boats were put in the water in the roughly 20 minutes it took for the first assault amphibious vehicle from the group to arrive on the scene.

The crew of the sinking vehicle prepared to evacuate by opening the top hatch as the rescue vessel pulled alongside it. But the rescue vessel hit the distressed vehicle with such force that it turned it broadside, exposing the open hatch to a large oncoming wave.

Water entered the hatch and swamped the troop compartment, causing the vehicle to sink quickly with people still on board.

After the sinking, Marine Corps Commandant Gen. David Berger suspended waterborne operations for a review of equipment, procedures and training.

The Corps has also directed the commanders of I Marine Expeditionary Force in California and III Marine Expeditionary Force on Okinawa to review “all safety practices and procedures associated with waterborne operations, ensure commanders are directly responsible for safety structure, and require general or flag officer notification prior to use of [assault amphibious vehicles] as safety boats.”

The MEFs have also been directed to improve training on emergency exiting of amphibious vehicles and proper communication between two such vehicles coming alongside each other.