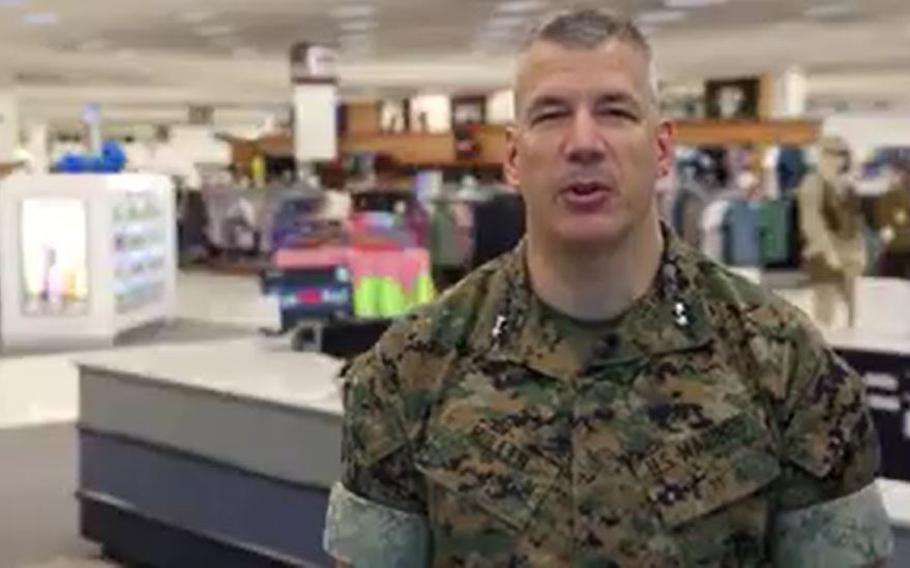 Mullen reminds Marines buying alcohol to always have a designated driver and never drink while handling open flames as Hendges stoically replaces a Marine’s case of Bud Light with a 12-pack of craft beer from Rogue Ales.

“And don’t forget to hydrate,” Mullen says after each attempted purchase, as Hendges, a former drill instructor, drops a massive jug of water onto the counter with a thud.

For Marines purchasing outdoor gear, Hendges adds a flashlight and first-aid kit — and, of course, a jug of water — before snatching a smartphone from one of the customers and tossing it in a trash can.

“Taking time to enjoy the outdoors is also time to disconnect from technology and connect with friends, family and nature,” Mullen says.

The video, which features a cast of eight junior enlisted Marines, was produced by Lance Cpl. Christian Lopez and directed by Lauren Kurkimilis, a former Marine Corps combat correspondent who works as a civilian communications specialist at the combat center. The combined arms training center is located in Southern California’s Twentynine Palms.

“I hope you enjoy your nice long weekend,” Mullen tells the Marines in closing. “You certainly earned it.”

And don’t forget to hydrate.