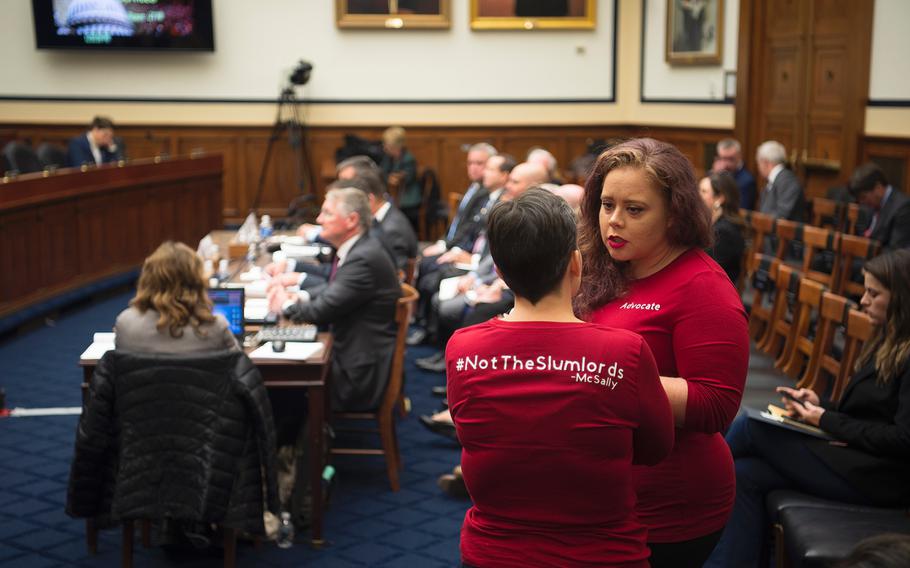 Richard C. Taylor of Balfour Beatty Communities, which manages housing on military bases, told lawmakers Thursday that the company fired 17 employees and is cooperating with a federal investigation into allegations that workers altered paperwork to receive financial bonuses from the Defense Department. “We take the issue of fraud seriously, including the allegations that certain members of our staff handled work orders inappropriately, and we are cooperating with the Department of Justice with regard to their investigation into these allegations,” said Taylor, president of facility operations, renovations and construction for the company and a former Navy civil engineer corps officer. Top officials from five of the 14 companies that manage housing on military bases were on Capitol Hill to face questions from members of the House Armed Services Committee’s subpanel on readiness about ongoing reports of families enduring unsafe and unhealthy housing conditions. It was the second visit to Congress for some company leaders since Reuters news agency began reporting last year about the poor living conditions of some base housing across the country. Members of military families have also testified to lawmakers, describing houses filled with mold, rodent and insect infestations and lead paint. For many of them, their attempts to seek remedies were met with slow responses and substandard repairs. In some cases, military families have filed lawsuits. Taylor on Thursday took heat from lawmakers over a November report from Reuters that his company falsified work order records at three Air Forces bases in order to receive bonus payouts. Those allegations are now under investigation by the FBI and the Air Force Office of Special Investigations. He said the company has hired an accounting and audit firm to conduct a forensic accounting review of Balfour Beatty’s requests for incentive fees. Tinker Air Force Base, Okla., Travis Air Force Base, Cali., and Fairchild Air Force Base, Wash., where fraud allegations are under investigation, make up just a fraction of Balfour Beatty’s military housing, said Rep. Kendra Horn, D-Okla. The company oversees 43,000 homes with about 150,000 residents in 26 states, she said. “From the documents that I have seen, it appears that your company earns $4.3 million in performance bonuses each year, and over the years, that is tens of millions of dollars in the performance bonuses that were paid out while documented evidence that Balfour Beatty -- and it does not matter if it was an employee down the line -- but Balfour Beatty was falsifying the records of tens of millions of dollars,” Horn said. “What I want to know is if you are going to commit to taking every single penny of this money paid based on the falsified maintenance records to invest it in fixing the problems at all of these housing units?” Taylor said the company would refund the money if the allegations are found to be true. “In the event that we are found to have falsified records, we are absolutely committed to refunding any incentive fees received back to those projects,” he said. “And further, in the event that any of our individuals are found to be at fault not complying with the code of conduct, which we take extremely seriously, to the extent that we have found that anybody has strayed from code of conduct, we will take appropriate disciplinary action.” Rep. Veronica Escobar, D-Texas, wanted to know more about the firings and how leadership will be held accountable. Taylor said the 17 employees were mostly managers at project sites and have been fired since the beginning of this year for violating the company’s code of conduct. “Regardless of what the investigation reveals, if it identifies wrong doing by any member of our staff, it doesn't matter if it's at the top of the organization, the middle of the organization, or wherever it sits, rest assured we will take the appropriate action to make sure those folks no longer are employed by our company,” he said. The hearing followed a report released Tuesday from the Government Accountability Office that described the unreliability of records kept by the 14 private companies that manage 99% of housing on military bases in the United States. The report, titled “Military Housing Privatization: Preliminary Observations on DOD's Oversight of the Condition of Privatized Military Housing,” served as the basis of testimony by its author Elizabeth Field, GAO’s director of defense capabilities and management, during a Senate Armed Services Committee hearing Tuesday with top military officials. Field reviewed more than 8 million work orders from the 14 private housing companies from October 2016 to May 2019 to try to determine the quality of houses on military bases, but found the data had not been captured reliably or consistently, and could not be used. Problems included duplicate work orders and work orders with completion dates prior to when the resident submitted the request for repairs. During that hearing, military leaders were grilled by senators about conducting oversight of Defense Department contracts with private companies. In the past year, each service branch has added staff to its housing offices and tightened the hold on incentive fees. Neither the Air Force or Navy has granted bonuses to housing companies this year, and the Army withheld bonuses at two bases. Other housing company representatives at the House hearing included John G. Picerne, founder and CEO of Corvias Group, LLC; John Ehle, president of Hunt Military Communities, Hunt Companies, Inc.; Denis Hickey, CEO of Lendlease Americas, and Jarl Bliss, president of Lincoln Military Housing. Together, they represent privatized housing for some of the country’s largest military bases, including Fort Bragg, N.C.; Joint Base San Antonio, Texas; Joint Base Lewis-McChord, Wash.; Naval Station Norfolk, Va., and Camp Lejeune, N.C. Rep. John Garamendi, D-Calif., the House subpanel’s chairman, said work to repair base housing isn’t just on the shoulders of these private companies – it also lies with the Defense Department.

“We knew right at the outset that part of the problem was that the base commanders did not take responsibility," Garamendi said. “That is changing. That needs to be addressed. The Pentagon is well aware of it from the previous secretary all the way down the line. And we'll see to it that that accountability remains within the military and the base commanders.”