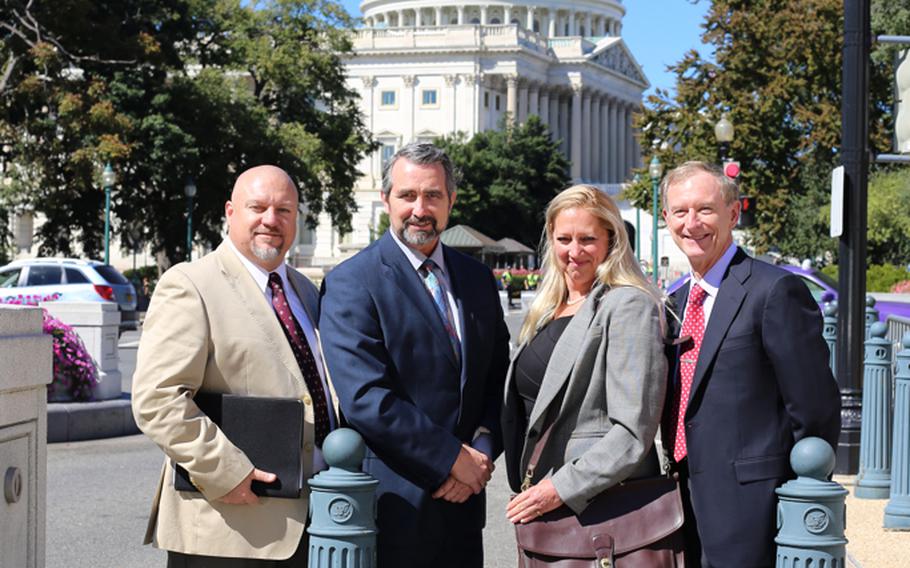 WASHINGTON — Cliff Elrod, Peter McCollaum, Joni Thomas and Steve Ewell are far from the only federal employees to be disappointed on Capitol Hill, but they may have traveled the farthest for the displeasure.

The four Defense Department employees are among several hundred overseas families enmeshed in a dispute with the Pentagon over Living Quarters Allowance. The DOD contends they were “erroneously” given LQA, and is now asking the families for reimbursement; the employees contend the department simply “reinterpreted” its rules and that they had been paid the allowances legally and rightfully.

Elrod, McCollaum, Thomas and Ewell came to Capitol Hill last week to take their case to lawmakers. But their timing was unfortunate. On their first day, Monday, a gunman at the Navy Yard killed 12 DOD employees and forced an hourslong lockdown at the Capitol. They spent the rest of the week meeting with aides to representatives and senators, and when the topic was supposed to arise at a Senate Armed Services Committee hearing Thursday, it did not.

But Elrod says their mission was far from futile. He said multiple House and Senate committees are now looking into the issue, while others are re-examining their initial determinations based on what they’d been told in the meetings.

“There was a whole other side that was told that hadn’t been told,” said Elrod, a staff security officer based at an Army base in Stuttgart, Germany.

The dispute traces back to a July 2011 decision by the Office of Personnel Management on a housing allowance claim filed by a Stuttgart-based DOD worker. That decision, based on State Department rules, led officials at U.S. European Command to worry that it contradicted previous interpretations of the State Department rules, and created a potentially widespread problem.

DOD launched an audit in 2012 that eventually determined roughly 700 families were receiving housing allowances “erroneously,” and asked them to pay back the LQA pay or obtain a waiver from the Defense Office of Hearings and Appeals. The Pentagon says 220 families have applied for a waiver, and thus far, 48 have received them. DOD has decided against granting a blanket waiver.

The workers grievances, however, don’t end with the issue of indebtedness. Although the DOD has granted a one-year housing allowance extension for the workers, giving them time to make alternate work or living arrangements, the workers have argued that the military should not be permitted to renege on the compensation packages it promised. Senior military commanders have argued the same, urging the DOD to grant a policy exception to allow employees to continue receiving housing allowances. The Pentagon has rejected those requests, and the one-year extension is set to expire in May.

That has infuriated workers, who say the promise of a housing subsidy is what lured them to accept their positions. Many say they have struggled to find alternative employment and that the DOD has put them in financial jeopardy, without even allowances for transportation and moving costs back to the U.S.

The four who came to Washington last week say they are fighting a massive misinformation campaign being waged by the DOD.

“Seven hundred and nine families are being considered collateral damage,” said McCollaum, a security operations officer at a based in Vicenza, Italy. “We were paid LQA in line with all laws and regulations. There was nothing ‘erroneous’ about it.”

“The staffers we’ve met with seem to understand,” said Thomas, a systems administrator at Ramstein Air Base in Germany. “But we’re at a total disadvantage with all of this misinformation that’s being put out there.”

The Pentagon is pushing back hard, saying it has already bent over backwards to accommodate the families.

Christensen also pointed out that the department is streamlining the processing of requests, and is delaying any debt collection procedures.

“Employees who have been erroneously receiving LQA, through no fault of their own, have made life choices based upon their continued payment of it,” he said. “The department supports requests for waivers of this debt in these unusual circumstances, as long as there is no evidence of misrepresentation, fraud, or deception to acquire LQA initially.”

Of the 659 cases, Christensen said 439 are based in Europe, while 214 are in the Pacific, five are in Bahrain and one is in Peru. He said the average amount of LQA indebtedness is $34,000.

“Senior leaders throughout the department have given considerable thought to the issue and meticulously explored viable options to mitigate the impact of this very unfortunate situation,” Christensen said.