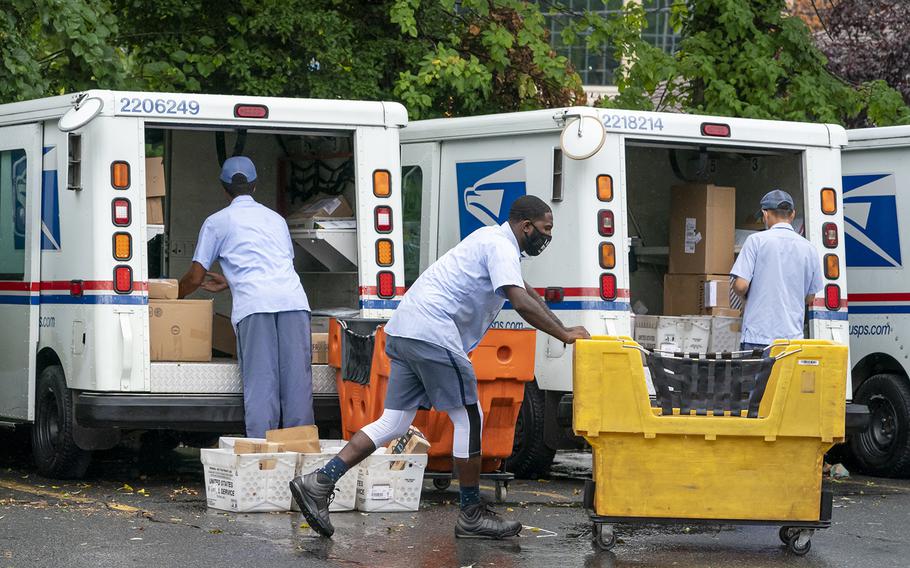 President Donald Trump appointed DeJoy, a former fundraiser for the Republican National Convention, to the job this summer as the coronavirus pandemic threatened the Postal Service’s financial viability. Staff hours have been cut and high-volume mail-processing machines were removed from post offices, according to multiple news outlets.

USPS union officials warned that the changes have led to many mail delays, raising concerns about the viability of mail-in voting. But changes also sparked concern among veterans and lawmakers about delays for mail-order prescriptions.

“We have received many troubling reports from veterans waiting weeks for their prescriptions to arrive,” a group of 31 Senate Democrats wrote to DeJoy.

The Department of Veterans Affairs fills 80 percent of its prescriptions by mail — about 120 million prescriptions per year going to 330,000 veterans.

The senators, led by Jon Tester, D-Mont., and Gary Peters, D-Mich., asked DeJoy to examine how his changes have affected the mail-in prescriptions and to work with the VA to ensure there are no delays.

The VA insisted Friday that most orders were still arriving on time. Press Secretary Christina Noel said prescriptions shipped through USPS are taking an average of three days to be delivered, and more than 95% of mail-in prescriptions have been on time.

The department is encouraging veterans to order routine refills 10 days in advance. Many, however, do not control their medication and rely on VA doctors to monitor them.

In cases of emergencies, the VA can fulfill those prescriptions in person, Noel said. Mail-in prescriptions are popular, though, in part because of veterans' mobility issues or distance from VA pharmacies. The VA can also use commercial carriers to deliver medication, Noel said.

Four House members wrote to DeJoy and VA Secretary Wilkie on Friday, claiming there was “a real threat to our veterans.” The House members said they were alarmed and had “grave concerns” about prescription delays.

“The culmination of these major changes [at USPS], pursued in the heat of the brutal pandemic and economic crisis, is now impacting our veterans’ access to prescriptions,” the House members wrote. “This is completely unacceptable.”

The letter was led by Rep. Mark Takano, D-Calif., chairman of the House Committee on Veterans’ Affairs. It was signed by one Republican, Brian Fitzpatrick, R-Penn.

There are efforts in Congress to provide the Postal Service with enough money to cover its revenue losses and operational expenses stemming from the pandemic. Some senators are pushing for the measure to be included in the next coronavirus relief bill, but prospects of another relief package passing through Congress remained uncertain Friday.

Trump said Thursday that he opposed funding for the Postal Service because he doesn’t want to see it used for mail-in voting in November. Trump has long criticized mail-in voting, alleging it leads to rampant voting fraud. Later Thursday, Trump downplayed his remarks and said he would not veto a relief bill just because it included funding for the USPS.