Korean leaders to hold 3rd summit next month in Pyongyang 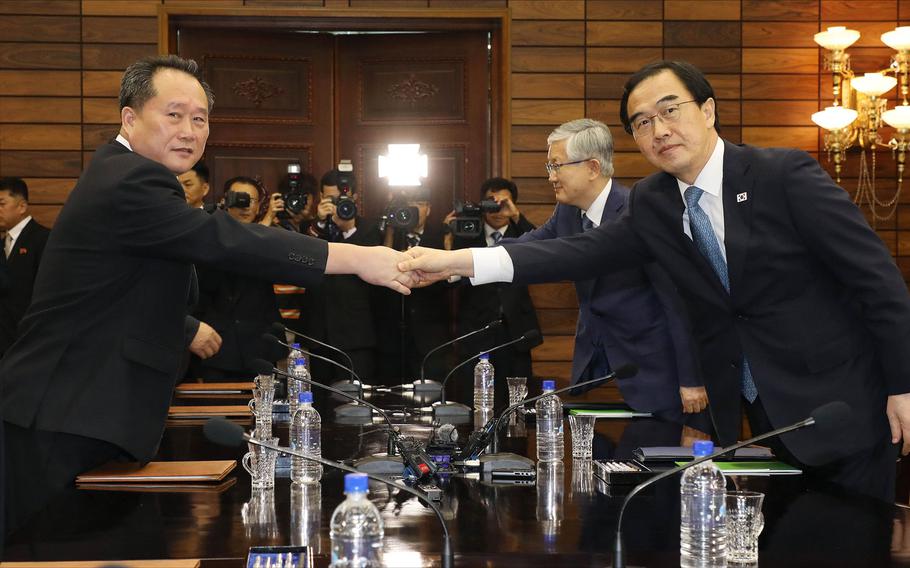 South Korean Unification Minister Cho Myoung-gyon, right, shakes hands with his North Korean counterpart Ri Son Gwon during their meeting at the northern side of Panmunjom in the Demilitarized Zone, North Korea, Monday, Aug. 13, 2018. Senior officials from the rival Koreas met Monday to set a date and venue for a third summit between South Korean President Moon Jae-in and North Korean leader Kim Jong Un, part of an effort to breathe new life into resolving the nuclear standoff between Washington and Pyongyang. (Courtesy of the Joint Press Corps)

Talks between the North and the United States have deadlocked amid allegations of foot-dragging by both sides on efforts to implement an agreement to “totally denuclearize” the divided peninsula, with little progress since the June 12 summit between Kim and President Donald Trump.

The topic is likely to be high on the agenda of the upcoming inter-Korean meeting as Moon has played a key role in bringing Washington and Pyongyang together and keeping them at the table.

Moon and Kim first met in the truce village of Panmunjom on April 27 and agreed to improve relations and pursue denuclearization.

They also held a surprise meeting in Panmunjom in late May, but that was mainly focused on getting plans for the unprecedented U.S.-North Korean summit back on track.

The Korean leaders had already agreed to meet in Pyongyang in the fall but left it to senior officials to hammer out the details on Monday.

“We agreed to hold an inter-Korean summit within September in Pyongyang,” according to a joint statement issued after the meeting on the North Korean side of Panmunjom, which straddles the heavily fortified border.

The brief statement added that the delegates – led by South Korean Unification Minister Cho Myoung-gyon and senior North Korean official Ri Son Gwon – also reviewed the implementation of agreements made during the April 27 meeting “in a sincere manner on matters related to more active enforcement.”

It did not give a specific date, but a presidential spokesman later said the meeting would probably be in the second half of the month.

Kim Eui-kyeom told reporters that the date would be up to North Korea as the host but it would be difficult to arrange it for early September “considering realistic conditions,” according to the Yonhap News Agency.

Details about the agenda also were not provided, but the two leaders could be expected to follow up on their earlier promises to pursue a formal end to the 1950-53 war and eventually replace the armistice with a permanent peace treaty.

The United States, which maintains some 28,500 troops in the South and was a main signatory to the armistice, has resisted the idea without progress on the nuclear front.

Christopher Green, an analyst with the International Crisis Group, wrote in a tweet that the issue “another gap-widener” between the two allies and the new summit plans were “bound to put pressure on Seoul in this regard.”

Moon, who is eager to maintain stability on the divided peninsula, has been caught in the middle as he tries to balance the need to maintain a strong alliance with the United States while seeking to improve inter-Korean relations.

The rival nations have held several rounds of bilateral talks and conducted sports and cultural exchanges as well as initiatives focused on improving forestry and infrastructure in the North.

However, Pyongyang has expressed frustration over the slow pace of implementation and criticized Seoul for allowing itself to be constrained by the U.S.-led sanctions.

The April 27 summit — the first face-to-face meeting between Korean leaders in more than a decade — was broadcast live and marked a high point in diplomatic efforts that began earlier this year and reversed tensions that had raised fears of a nuclear war.

The North has made strong advances in developing intercontinental ballistic missiles that could target the U.S. mainland and conducted its sixth and most powerful nuclear test last year. That led to a fierce war of words with Trump.

Trump and Kim also hailed their June 12 summit in Singapore as a major step toward improving relations. But U.S. and North Korean officials have traded allegations of violating the spirit of the denuclearization agreement.

Washington wants the North to dismantle its nuclear weapons, but Pyongyang is calling for a phased approach that would see rewards such as sanctions relief for steps toward denuclearization.

Two other inter-Korean summits were held with former leaders in 2000 and 2007.