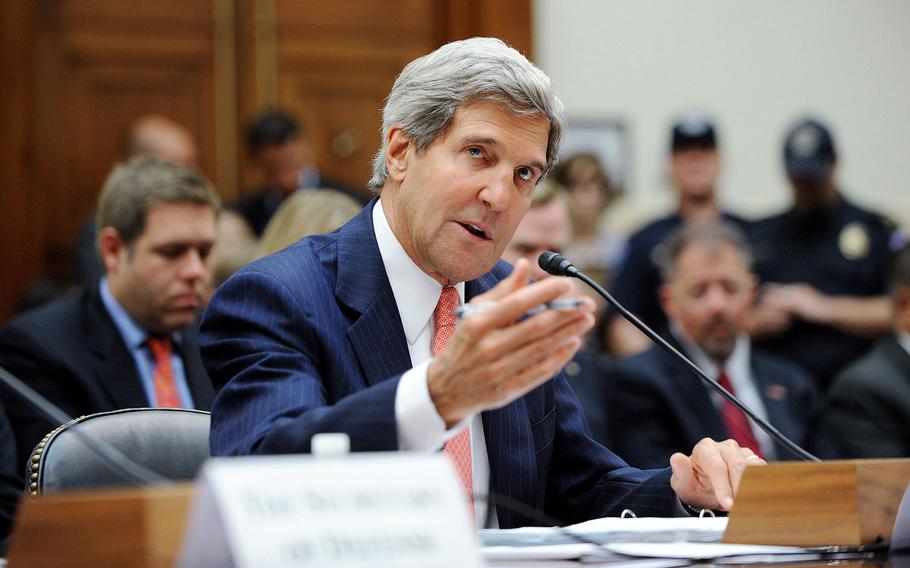 WASHINGTON — Secretary of State John Kerry on Wednesday appeared in the Senate to urge Congress against intervening in delicate nuclear negotiations with Iran, calling the recent collapse of talks only a "pause."

Kerry reminded reporters that as a senator, he joined his then-colleagues in putting the sanctions against Iran in place. But he urged patience for them to work before Congress meddles and decides to increase them, therefore harming a U.S.-led coalition and the talks themselves.

"We put them in place in order to be able to put us in the strongest position possible to be able to negotiate. We now are negotiating. And the risk is that if Congress were to unilaterally move to raise sanctions, it could break faith with those negotiations and actually stop them and break them apart," said Kerry, who was testifying before a closed-door committee hearing.

Countries including Germany, France, Russia, China and the U.S. are unified behind the proposal that Kerry delivered a few days ago to Iranian officials in Geneva, he said, while also pushing back against criticism that the proposal was too soft.

"If it weren't strong, why wouldn't Iran have accepted it yet? We have a pause because it's a tough proposal and people need to think about it, obviously," he said. "If all of sudden sanctions were to be increased, there are members of that coalition who would think we're dealing in bad faith, and they would bolt.

"So we believe we've put ourselves in the strongest position to be able to start – this is a first step, not a final agreement – and we have all the opportunity of negotiations to make certain this is a peaceful program that can threaten nobody. What we're asking everybody to do is calm down, look hard at what can be achieved and what the realities are. If this doesn't work, we reserve the right to dial back up the sanctions. I will up here on the Hill asking for increased sanctions. And we always reserve the military option. So we lose nothing except for the possibility of getting in the way of diplomacy and letting it work."