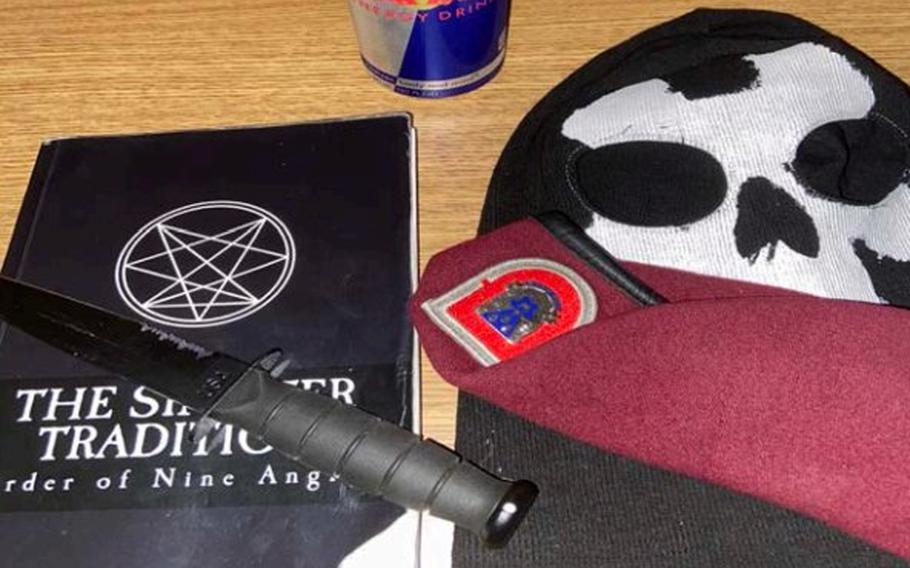 This photo provided by the Department of Justice seized from an iCloud account belonging to U.S. Army Pvt. Ethan Melzer displays personal effects, including paraphernalia associated with the extremist group Order of the Nine Angles. (Department of Justice)

A 22-year-old U.S. paratrooper charged with planning a “murderous ambush” on his own unit by sending sensitive details to a satanic neo-Nazi group was serving with the 173rd Airborne Brigade, the Army’s Italy-based rapid response force.

Pvt. Ethan Melzer of Louisville, Ky., sent details about his overseas unit’s locations, movements and security measures to members of an extremist group named Order of the Nine Angles, intending it to be passed on to jihadi terrorists, the U.S. Justice Department said in a statement Monday.

“We’re reacting to it like everyone else,” said brigade spokesman Maj. Chris Bradley on Tuesday, after he said officials notified the unit’s 3,500 paratroopers of the arrest and indictment.

Since November, Melzer had been assigned to the 1st Battalion, 503rd Infantry Regiment of the Vicenza-based brigade, which provides forces to U.S. European, Africa and Central commands.

The FBI subsequently arrested him on June 10, the DOJ said in a statement, which praised various government agencies, including the U.S.

“As the indictment lays out, Ethan Melzer plotted a deadly ambush on his fellow soldiers in the service of a diabolical cocktail of ideologies laced with hate and violence,” John C. Demers, assistant attorney general for national security, said in the statement.

Melzer was “motivated by racism and hatred as he attempted to carry out this ultimate act of betrayal,” said Audrey Strauss, acting U.S. attorney for the Southern District of New York, where the indictment was filed.

FBI agents found Melzer was in possession of Islamic State propaganda that described the attack and murder of U.S. personnel, the statement said.

The soldier voluntarily told military investigators and the FBI that he had plotted an attack with the intent of killing as many of his fellow soldiers as possible, the DOJ said.

“Melzer also declared himself to be a traitor against the United States and described his conduct as tantamount to treason,” the statement said.

Melzer joined the Army in 2018, and the following year joined the Order of the Nine Angles, which has espoused violent, white supremacist, anti-Semitic and satanic beliefs, the statement said. It has expressed admiration for figures such as Adolf Hitler, Osama bin Laden, and other radical Islamic jihadis.

Originating in the United Kingdom several decades ago, the group is “the most extreme Satanist group in the world,” the London-based advocacy group Hope Not Hate said in its “State of Hate 2020” report, calling for it to be designated a terrorist group.

It encourages extreme violence, including rape and murder, the report said, and “seeks to harness supernatural forces and overthrow the alleged ‘Nazarene/Magian’ (Jewish) influence on society, reduce the population of ‘mundanes’ through acts of extreme barbarism, and usher in a new imperial aeon (age) ruled by a race of Satanic supermen who would colonise the solar system.”

Melzer sent encrypted messages to members of the Order of Nine Angles, disclosing his unit’s location and security arrangements, after he and other members of the unit were told in April that they would deploy from Italy to guard a military base in an unnamed foreign country, the indictment said.

“Melzer and his co-conspirators planned what they referred to as a ‘jihadi attack’ during the deployment, with the objective of causing a ‘mass casualty’ event victimizing his fellow service members,” the statement said.

“Melzer acknowledged in electronic communications that he could be killed during the attack, and, describing his willingness to die, wrote ‘who gives a [expletive] ... it would be another war ... I would’ve died successfully ... [because] another 10 year war in the Middle East would definitely leave a mark,’” the statement said.

He also passed on information to a purported member of the terrorist organization al-Qaida, including a promise to pass on more information once he was deployed overseas, the statement said.

The charges carry a maximum jail sentence of 20 years.

Nancy Montgomery and Chad Garland contributed to this report.